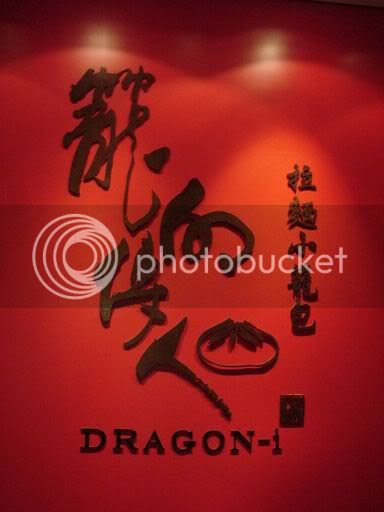 There has been a slew of new restaurants which recently opened this month at 1 Utama Shopping Centre and one of the new additions is a branch of the Dragon-i Restaurant located at Cititel Hotel, Midvalley. Since it's opening, it's been making waves with the Shanghainese food it offers and I have heard quite a bit about it. 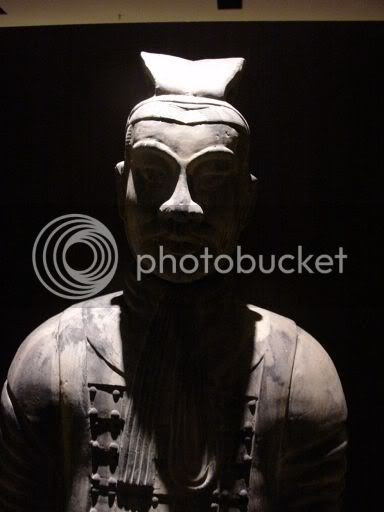 Nope, I did not go to Xian to see the terracota soldiers like Jess did but this is one of the statues that line the entrance to the restaurant. Impressive walkway with the statues on your left and a wall with chinese characters before you reach the service counter to get your table. The restaurant is done up in shades of red and black, soft lightings and a glassed up kitchen so you can see the chefs in action. There is even a window in front of the restaurant so people can peek in when they walk through the mall. (More on that later on) 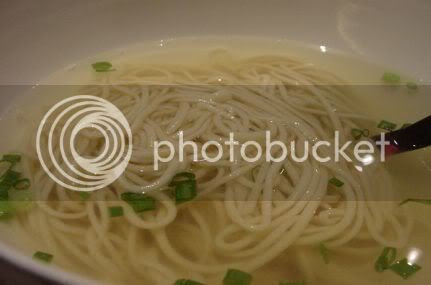 I had a pretty simple dinner since I was flying solo that night and ordered two must haves in Shanghainese restaurants, the lai mian and the xiao long bao. A plain one was ordered since I was planning to eat it with my dumplings. Since I have eaten at Crystal Jade before, I did a bit of comparison between both of them and based on my opinion, the lai mian is a bit lacking here. The lai mian here is a bit thicker than Crystal Jade and the broth was also a bit tasteless. 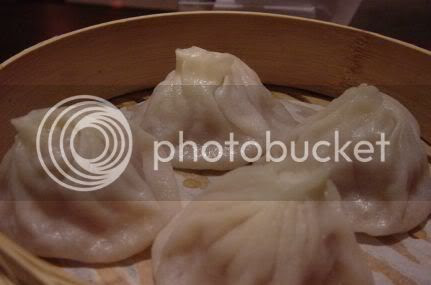 Their saving grace was the xiao long bao, little steamed meat dumplings with soup. They were very nice and the meat filling melted in my mouth. They have a slightly different way of making it though, you can't suck through the hole for the soup unlike the Crystal Jade ones so I had to nibble a bit at the bottom to drink the soup. 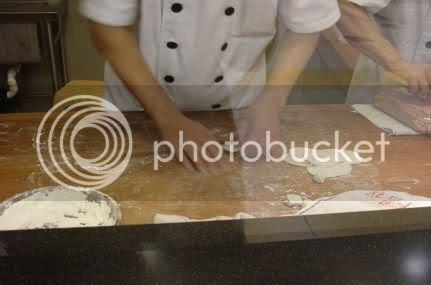 On the way out, I got reprimanded by one of the waitresses as she told me firmly - no picture taking in the restaurant. Luckily I had all my pictures so I was unruffled with her chasing me away. Then I spied the little window (sorry about the reflections) on the side as two chefs prepared the night's xiao long bao. One chef was rolling out the dumpling skin. Good xiao long bao must have skin which is transculent and fine. 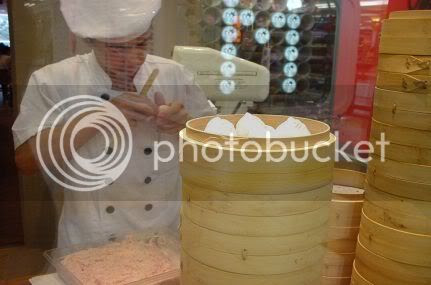 This chef was making the folds for the xiao long bao. It seems there an exact number of folds that you must make for the dumplings. Some swear that it is a total of 18 folds but each restaurant have their different methods. 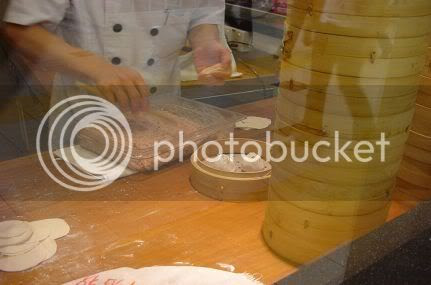 After the folds are made, he puts in the pre-made filling which mainly consists of meat, stock, soya sauce, sesame oil, spring onions and ginger that is blended. Each restaurant will have their special recipe and portions while some may even add extra ingredients to make it tastier. I couldn't take pictures of him closing the dumpling as his hands were moving too fast. Once done, they will place the dumplings in the bamboo steamer, ready to be steamed when someone places their order.
Side note: More restaurants seem to be opening on the New Wing's concourse area - delicious is moving downstairs to a bigger space and Bakerzin is also due to open next month.
Dragon-i Restaurant
Lot S313A, New Wing
1 Utama Shopping Centre

(It is located next to Sri Melaka restaurant, almost to the end where MPH book shop is at the new wing)
*Disclaimer: The opinions expressed here is entirely based on my personal tastebuds and may vary for others. The reviewer also declares that she has not received any monetary or non-monetary compensation from the restaurant for writing this review.
Posted by boo_licious at 6:00 AM

wow you are really quick! i spotted this new restaurant recently and wanted to try it out! i miss xiao long bao from my HK trip. is it costly here? plan to adhere to my cravings. LOL

Looks good. I was going to try this place with a friend. Looks like you beat me to it! ;)

rokh - it's not extremely costly, the xiao long bao is RM8. I was doing some late night grocery shopping so I thought I'll give it a try.

Lavamama - Do give it a try still as I would really love to read your comments on it. There are so many differing opinions abt the place. I was warned by my mum not to order the eel dish though, she said something like it wasn't as nice as the ones in Shanghai.

I can't believe you were told no pictures! If I were told that, I would have said that I wouldn't pay for the food. In my opinion, since I'm paying for the food it's mine, so I should get to take photos of it. *sigh*

Did you find that the skin on the xiao long bao were a little thick?

eeeeeeeeeeeeee... hohoho.. i was just told by foodcrazee tat u went to dragon i too..

decor sounds interesting, too bad about the la mian.. can't wait tho' for u to give ur opinion on bakerzin when they open.

rabbit - it's very nicely decorated though!

reid - I think she was complaining about me taking pixs of the restaurant as she thought I wanted to steal their Interior design. The skin was okay only - could have been a bit thinner especially on top folds.

Cath - Er, why ah - is it bad? I have yet to try Bakerzin even though we have an outlet in Bangsar. Very differing opinions from friends who have tried it before though. Selected items are nice only they have told me.

julie - hahaha, it's fate that you eat at dragon-i too. I'm not surprised as people usually try out new places. Looks like you had a great deal since you got free dessert. I love those egg white puffs!

Just becareful when you eat here. The kitchen is unhygyenic. Bad experience with the dessert.

check out this link of mine:

sorry, forgot to include the link: