Recently, I was in KLCC to have quick lunch with Splashie Boy. We headed towards Suria KLCC and after a few minutes of debating on what to have, we settled for Tarbush that serves Lebanese food in the Signatures Food Court on Level 2. For those who are unfamiliar with Suria KLCC, the food court has different outlets that serve a variety of foods like fast food from McDonalds, beef gyu don from Yoshinoya, Kelantanese food from Kelantan delights, laksa from Laksa Shack and etc.

Besides this food court outlet, Tarbush also offers casual and fine dining around the Ampang area and at the newly opened Starhill Feast Village. It's my first time trying their food out but Splashie Boy was introduced to the food by a colleague of his. He chose to have the Dawood Basha with Rice that is two big lamb meatballs in a tomato sauce. I had a bit of his food and the meatballs is pretty yummy. The portions are huge here so be warned! We wanted a heavier lunch since both of us did not eat any breakfast that day. 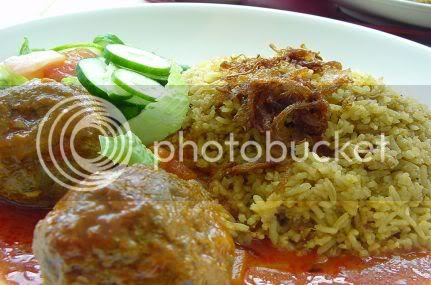 I had the chicken briyani with rice which was totally different from our local briyani since it does not have a lot of coconut milk. I love the fresh salad they give with their dishes which is plain but tastes great. 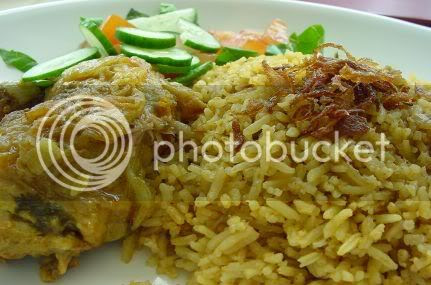 You can also get sharwarma and fattoush salads if you want something lighter. We ate in front of the big glass windows with the fantastic view of the park as that had the best light for picture taking. I wanted to take a picture to show all the non-Malaysians, the KL skyline but Splashie Boy said there will be a reflection. Incidentally, we weren't the only picture taking people at the food court, the girl in the next table took a picture of her Yoshinoya meal. I wonder if she is a blogger too? A quick side note: Rain Nudle House upstairs has closed and there is a sign saying Little Penang Cafe will take over this month. That will be interesting since they are so close to Madam Kwans which serves similar Nyonya food.
Tarbush Restaurant
Signatures Food Court
Level 2, Suria KLCC
*Disclaimer: The opinions expressed here is entirely based on my personal tastebuds and may vary for others. The reviewer also declares that she has not received any monetary or non-monetary compensation from the restaurant for writing this review.
Posted by boo_licious at 8:45 AM

ooo interesting. i haven't been to the food courts in a while since they're usually over packed at lunch hour and over priced. maybe i should try out this stuff.

Again, Yum! I didn't realise Tarbush had opened in KLCC, I thought it was only across from Star Hill.
I suppose the last time I was in KLCC in July I didn't stop by the Food Court. Wanted to try Madam Kwan's. It was alrite.
PS. Ur pics always turn out great, do u use a digital camera or just ur phone?

KY - do you work in KLCC? Hmmm, I wonder if I have seen you before.

thaaniya - Madam Kwans is pretty good, I like the Nasi Bojari and the lightning fast service there. Only bummer is the queue but we usually book ahead.

I use a digital camera and tend to look for places with good light hence we walked around the food court for the perfect light.

Boo, just looking at the photos makes me hungry... I've never tried lebanese food before... this is interesting.

rabbit - Give it a try when you come down KL!