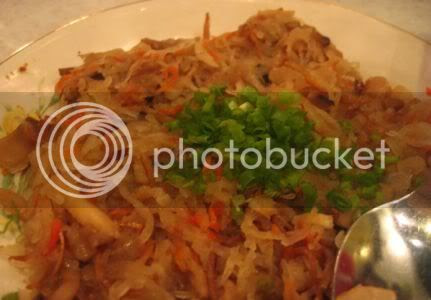 Last weekend after hearing Robyn's raves on Padi Prada, a whole group of us headed there for dinner with an overseas guest who is touring around Asia. Although the place is pretty far i.e. Kota Kemuning in Shah Alam, the township is accessible through a network of highways so it was a pretty easy ride.

The place was crowded with families having their weekend dinner and we settled in to order our dishes. The owner recommended us a few of their special dishes which we ordered. After she had gone to place our order in the kitchen, we were a bit worried that the portions were simply not enough for us since there were such a large group of us. Subsequently we had to add more food orders which we all polished.
The first dish we had was Ju Hoo Char made from shredded jicama bean, carrot, cabbage, Chinese mushroom and dried shredded cuttlefish. Usually the cuttlefish is marinated in vinegar before it is fried. The shredded vegetables are simmered in stock until they are tender and drained. It is then tossed with the cuttlefish and mushrooms. Padi Prada's version is served with lettuce leaves which you add a bit of Ju Hoo Char and a dollop of their chilli sauce on top and savour. 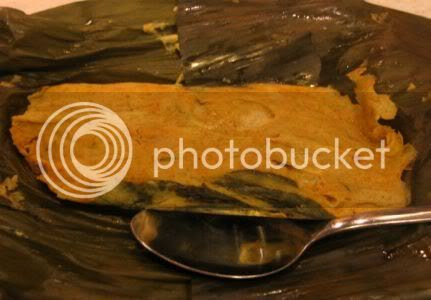 We ordered two portions of their Otak-Otak and it was really good stuff. This version is the Northern type and looks pretty similar to the Thai version. It came with chunks of fish inside it and is steamed with fragrant betel leaves in a banana leaf parcel. We ordered the stir fried brinjals/aubergines/eggplant. Not too sure what it was fried with but it was not the usual sambal belacan. 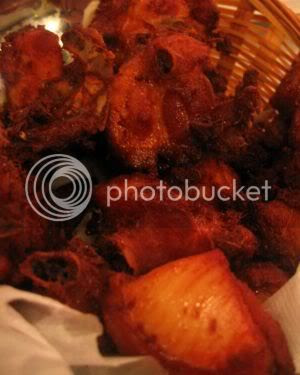 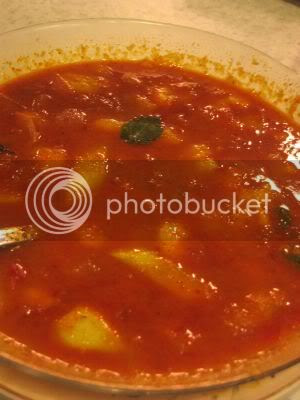 This is the Prawn Curry, not many prawns in it but the curry sauce it came with was full of flavour and went so well with the white rice. 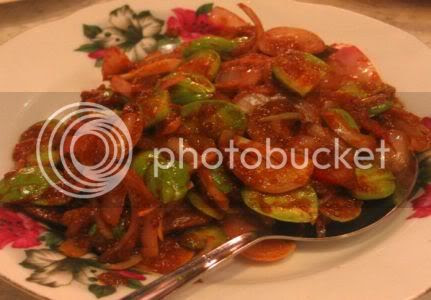 Another must have dish, the Sambal Petai. Petai is also known as stinky beans as they cause quite an unpleasant smell once consumed. These beans are found in jungles and is usually collected by the local Orang Asli. 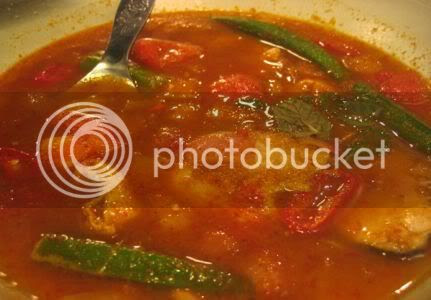 This is the Gulai Tumis, assam based fish curry. I like the taste of their curries but they are a bit watery though. 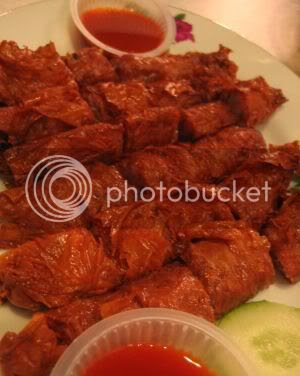 My absolute favourite, Lor Bak which is chopped meat wrapped in bean curd skin that is deep fried till it is crispy. Padi Prada's version is very nice: crispy on the outside but the filling is soft and flavoursome. The Lor refers to the thick brown sauce usually served with this dish that is made from dark soya sauce, five spice powder, egg white and corn starch. Another famous dish, Tau Yu Bak which basically means Pork (Bak) in Black Soya Sauce(Tau Yu) in Hokkien. The pork and hard boiled eggs are braised in black soya sauce with spices such as five spice powder, star anise, cinnamon and cloves till it's full of flavours and soft. 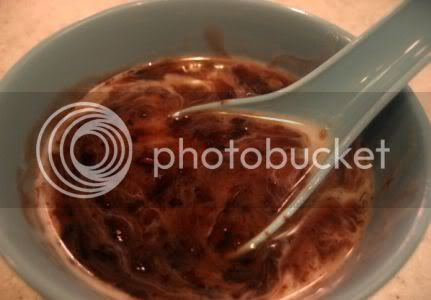 We also had complimentary desserts, black glutinous rice porridge with coconut milk. The rice is cooked with water till it is soft and creamy. Subsequently it will be simmered with pandan leaves and sugar to give it flavour. Just before serving, a few tablespoons of coconut milk will be added. You can stir it in to make the porridge to make it creamier.

Overall, we all enjoyed the dinner and wouldn't mind coming back again especially for their otak-otak and lor bak. Thanks to Shiewie for taking the lovely pictures.

Padi Prada
4 Jalan Anggerik Vanilla Y/31Y
Kota Kemuning
Shah Alam.
Tel No: 03 -5121 0167
(Closed on Mondays- is next to the Hicom Gamuda sales office for Kota Kemuning houses. The place also serves breakfast)
*Disclaimer: The opinions expressed here is entirely based on my personal tastebuds and may vary for others. The reviewer also declares that she has not received any monetary or non-monetary compensation from the restaurant for writing this review.
Posted by boo_licious at 10:30 AM

Definitely got me drooling all over my keyboards!

coincidently i will be going to kota kemuning this sat but for a friend's birthday party, might check out the place and return next time. looks too yummy to pass out. ;)

Delicious Nonya stuffs! I love otak-otak! Everything is so tempting and tasty *drool drool* - except the petai dish... Glutton Rabbit detest stinky beans!

rokh - do check it out

I have been there, I find the fod just Ok. A bit on the pricey side. Iam local in Kota Kemuning and I love to go to a makan place called 'TREATS Cafe" just turn the corner from Padi Prada, real good food....

I just went there based on this review and the food was bland and dissapointing. For Peranakan standards - Mama Fish Head (close to Atria) and even Ah Tuan Ee (in SS2 and the Curve) is so much better.

Will not go there again.