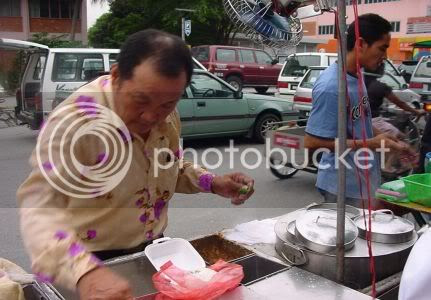 I am not much of a pasar malam (Malay for night market) person but I am trying to change for the better by making a point of visiting them more often! That is why, for the first time after almost ten years, I braved the traffic jams and the almost about to rain weather to do a quick walkabout around the SS2 night market for my dinner.
I totally did not regret getting stuck in a traffic jam and circling around to look for a car park space as I found treasures around the stalls that flank the square within SS2. First find was something I had not eaten for years and years, a kueh tu tu stall. I thought these were extinct ever since I lost my favourite stall near Petaling Street. Not sure why they went out of fashion in Malaysia but it is still going strong in Singapore.
You can see people are totally unfamiliar with this kueh as when I was queueing up for my kueh, kids will walk past and stop to point plus talk among themselves that they have never seen this kueh before. Even a couple who claimed they were from Singapore were curious claiming they have never seen anything like this before. 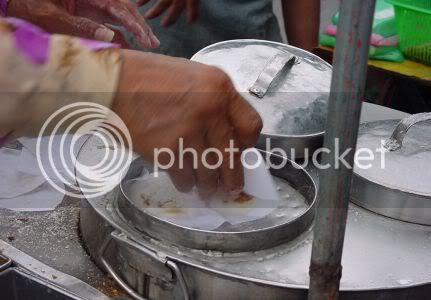 The uncle selling the kueh tu tu said he has been doing this for the past forty years. He claims he was previously selling the kueh in Petaling Street. My Cantonese is pretty hopeless so I caught bits and pieces of the conversation I had with him. He told me he has been selling this kueh somewhere else most of the time but he does this once a week during the pasar malam. 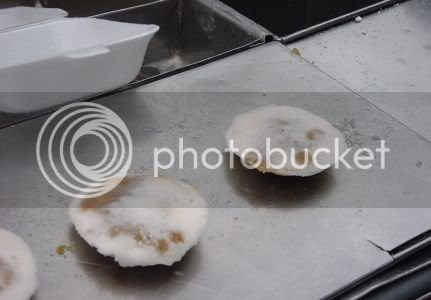 He works really fast hence I couldn't really capture some parts of him making the kueh. He will fill a mould with rice flour, put the cooked brown grated coconut filling inside it and cover it with some more rice flour. A white square cloth is placed underneath the kueh and placed in the steamer. Once ready, he unmoulds them and places a piece of pandan leaf underneath it. It is then packed in plastic boxes or bags for the customers. 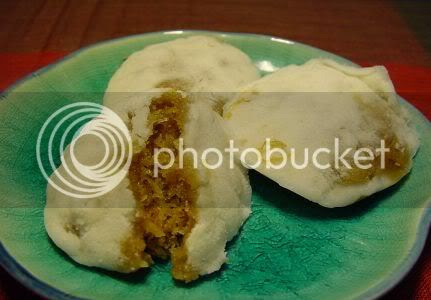 I bought three kueh tu tu for RM1 which I took back for my dessert. Really yummy stuff even though they were not piping hot. For those who are unfamiliar with this kueh, it's kinda like the Malay putu piring or putu bambu except the flour is slightly different (it's packed more) and the filling is cooked coconut with gula melaka (Malay for palm sugar). Another variety they have is crushed peanuts as the filling.

To find this stall, he is located in front of the SS2 police station. You may have to wait a bit for him to steam the kueh tu tu or there may be a queue waiting for the kueh. 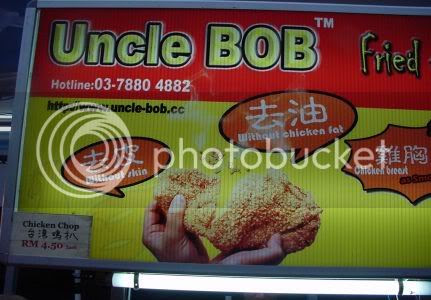 I chanced on this fried chicken stall and decided it must be very good as they had two outlets within the same night market (One stall is along the McDonalds stretch) while the other stall is nearer to the hardware stall. When I walked past the first outlet (along McDonalds), I heard a comment from a passer-by to one of the guys queueing for the fried chicken praising him for knowing what to eat in the market. That peaked my interest and I thought I'll get some when I walk back. So when I saw the second stall, I thought I better just get it here since the queue was not too long. 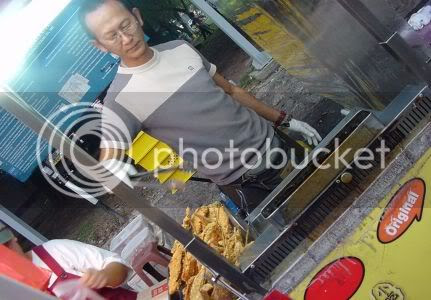 My pictures are at a funny angle as I took them while queueing up for my food (by the way, a lot of patience is needed for foraging food in the night market since queues can be long). A quick look at their signature dish and it looked a bit like the Shihlin Taiwanese XXL Crispy Chicken. 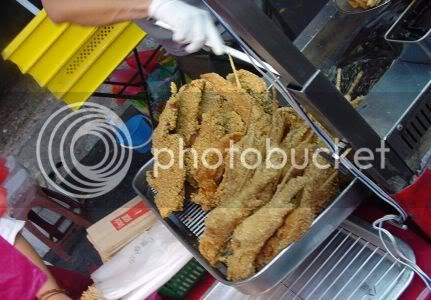 Besides the chicken chop (Shihlin lookalike) they also sold deep fried chicken wings on a bamboo skewer. They will chop the chicken in small pieces and then sprinkle chilli and a spice powder on top of it. Then it is plonked into a brown bag with skewers for you to eat when you walk around the market. 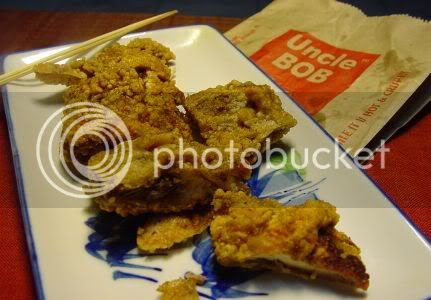 On the way home, I stole a few pieces and it was super yummy. Had to really brace myself not to finish it all since I wanted to take some pictures when I got home. Price wise, it's cheaper than Shihlin since it's selling at RM4.50 without any service tax (Shihlin's chicken is RM4.80 plus 5% service tax). It's even halal as per their brown bag information. What else did I get in the market? I chanced on something I also have not eaten for ages, kerabu chicken feet. It's basically chicken feet skin that is nice and crunchy (not too sure how they do it), chopped onions, chopped chilli padi and mint leaves tossed in a nice tangy dressing. Simply yummy and fiery stuff. You can get this for RM3 all packed up at a stall near the Island Cafe. 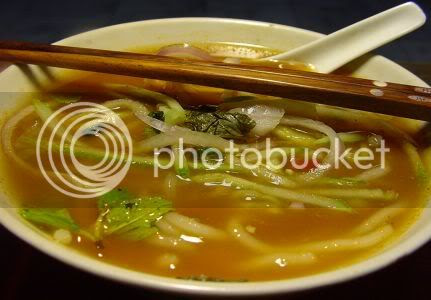 I also had assam laksa which I tar paued (Chinese for packed back). The soup is nice but I would have liked a teeny weeny bit more of fish in it. Guess you can't expect much since it was only RM3 for a bowl. This is from the van near the hardware stall.

I think I am hooked on this pasar malam as I plan to make another trip there again (weather permitting) to try other stalls so you may get further posts on food from this place. For those of you who are totally familiar with the pasar malam there, I would love to hear your recommendations on which stalls to try out since I am a total newbie with this place.
Posted by boo_licious at 5:30 AM

Nice write up boo. You could pay extra if you wanted more fish for your laksa. From memory I think its 50cents extra or something. I've not tried Uncle Bob's chicken though I have noticed its quite popular. Maybe next time :)

Lavamama - Thanks for the tip, but it turned out okay since I had a lot of food to eat. What else is good in SS2's night market?

I recall that asam laksa van as the most popular "back in those days", where people would start a queue as early as 5:30p.m. even though the van wasn't there yet! Haven't had it in a long time, maybe the quality has dropped somewhat since then...

There's a popiah stall on the same row as McD's, somewhere in-between the fruit stalls which is quite popular.

may - the assam laksa was not bad, just lack of fish. I think I need to tambah ingredients. On the popiah stall, which one is it? I saw 2 - the stadium one and another one which looked more popular as people were queueing up for their popiah.

excellent food again as usual..u should b a food critic or maybe u r one already!

boo, you missed the MOST popular popiah stall as the vendor has unfortunately retired earlier this year. One used to have to wait very patiently for at least 45-50min!! But it was one of the yummiest. The next best...well, I'll be blogging about this soon is IMHO the sakura sisters. If you like crispy popiah, this one is fairly similar but cheaper! ;)

wu ching - I wish I was a paid food critic!

lavamama - yeah, I heard about the popiah man retiring from KY's blog. ooo, I love the sisters popiah esp the crunchy bits.

i usually scoure ss2 market for food too, both mondays and thursdays ones. i love the crispy chicken too, plus yea, the sakura sisters popiah.

rokh - hee hee, I want to try the Thursday one. Hopefully can do that before rain starts.

Boo, wow... great photos. I love you dish very much (the kerabu chiken feet one)! Nice write up about. This is the first time I am seeing and hearing about kuih tu tu. Interesting... thanks for sharing!

rabbit - Glad you enjoyed the pixs and kueh tutu is yummy stuff.

boo, i finally tried the Uncle Bob's chicken. Very tasty indeed! *but then I do have soft spot for deep fried things!!* ;)