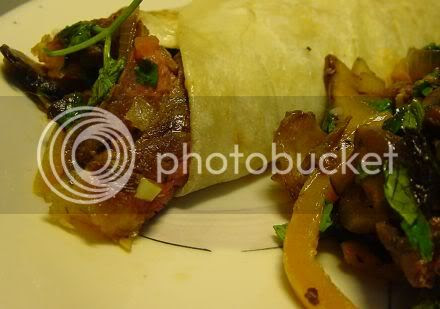 After eating all those traditional Malay dishes, we felt like something completely different so I made some fajitas at home. They were partly inspired by the tortillas which I found ready made from Giant supermarket. Previously, they had ready made flatbreads but they had discontinued them. Now, they seem to have brought in similar flatbreads which have been renamed as tortillas. There are different varieties available; garlic, plain and wholemeal. You just reheat them in a frying pan or the oven and they are ready to be rolled with your fajita fillings.
For the filling, I adapted a recipe I had from Taunton's Fine Cooking magazine. Unfortunately I was unable to rustle up a ripe avocado to make some guacamole but I served it with sour cream and a tomato salsa. Sorry about the picture, I was busy rushing it to the table so it would be piping hot that I hastily plated it and took the pictures in record time. As I had no jalapenos, I omitted those but I did add some mushrooms I had to the mixture. I love the flavours of the filling, very nice and it all went very well together. There was quite a bit to eat too unlike the portions you get at the restaurants so we were extremely full after that meal. We complemented the meal by watching a replay of the NBA match between San Antonio Spurs and Cleveland Cavaliers.
Seared Steak, Pepper and Onion Fajitas

Combine salt, pepper, cayenne and cuimin in a small bowl. Rub the steak with the seasoning on both sides. Heat oil in a heavy skillet until very hot but not smoking. Put steak in hot pan and sear for three minutes. Turn steak and cook for further two minutes. (Note if your steak is thinner, please reduce the time accordingly). The steak will be very rare but will cook more later. Take skillet off the heat, transfer steak to cutting board and cover loosely with foil to keep warm.

Return skillet to medium heat, add the pepper and onion slices and saute, stirring frequently, until soft about eight minutes. Add the jalapeno and garlic and cook until soft and fragrant, about 1 minute. Slide the skillet off the heat and stir in the lime juice, scraping up any browned bits from the pan. Cover and keep warm.

Trim the fat from side of steak and cut the steak into thin slices. Add slices to the skillet along with any accumulated juices. Toss until well blended. Stir in the chopped cilantro and season with salt and pepper. Serve immediately with warm flour tortillas, sliced avocado(or guacamole), sour cream, chopped tomatoes and cilantro sprigs.
Posted by boo_licious at 9:00 AM

Boo, the fajitas look real good... I hadn't had my dinner yet, so I am drooling all over the place now...

real yummy-looking fajitas - have yet to try any supermarket tortillas but you might have just persuaded me to make a trip for them :)

rabbit - they were very yummy, I must admit. The lime juice was a nice touch.

Cath - Like Rajan said, if you can make your own tortillas but for me, when I get the mood to just whip up something especially during the weekends when I am busy, I just look for shortcuts like these storebought tortillas.

YUM! I haven't figured out yet whether I always manage to come over here when I am hungry, or if coming over here makes me hungry! Too funny about the flatbreads reappearing with a new name. : )

farmgirl - it's a marketing ploy I guess. More money to make if it sounds foreign.