One of my lunch companions had recently read about this place in the newspapers that served all kinds of yau char kuai and was keen to try it out so we headed there for lunch.

A bit about yau char kuai for those of you who are unfamilar with it, it literally means, Oil Fried Devil in Cantonese and is basically a flour dough that is deep fried. It is also known as Chinese Crullers or youtiao in Mandarin. This item is extremely popular here and in Hong Kong especially for breakfast. You usually eat them plain with soya milk or with rice porridge. The funny name for this food item started out in China as a kind of hidden protest against a government official who had framed a popular general. The crullers are said to represent the government official and his wife being deep fried in oil, one of the Chinese tortures at that time. Recently, Foodcrazee made some and he has very nice pictures of the whole preparation process. Incidentally, yau char kuai is also known as Char Kuih among the Malays which had even adopted this food item and you even see them at Ramadan Bazaars.

I was a bit excited to try out this place as I wanted to eat Char Leong (or Hong Kong Char Kuih Roll as how the restaurant itemises it in their menu). Whenever I am in Hong Kong, I must always have a plate of Char Leong, Fried Cheong Fun and a glass of hot soya milk from my favourite haunt, Causeway Bay. Char Leong is basically a yau char kuai which is rolled in a rice flour sheet akin to chee cheong fun. It is then cut in pieces and dipped in peanut sauce. Sadly the one in this restaurant just did not make the mark as the yau char kuai was not too fresh so it was not crispy but chewy. They didn't serve it with peanut sauce but with a chilli sauce that was a bit salty. 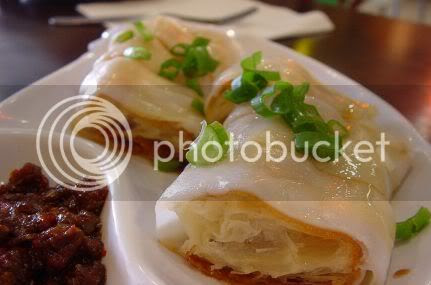 Although they did not have Fried Cheong Fun with Peanut Sauce like Hong Kong, the nearest they had to that dish was Fried Cheong Fun in XO Sauce. XO Sauce is a popular seafood sauce that has chillies, dried scallops and dried prawns and is usually use to fry items or as a dip. I suspect they used the same dipping sauce we had with the Char Leong. This dish was very yummy as they fried the rolls of cheong fun nice and dry and you could taste the XO Sauce. 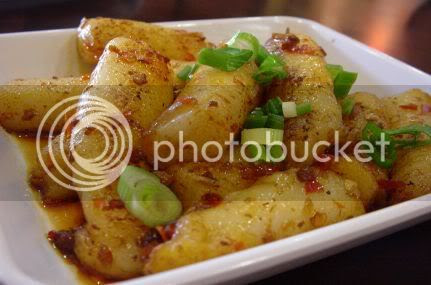 Besides the little dishes we also ordered some set lunch like this Rice with Eight Treasures. The Eight Treasures refer to the mixed vegetables, tofu and mushroom. As it was a set, it came with a bowl of herbal soup and two kiwi konnyaku jellies. 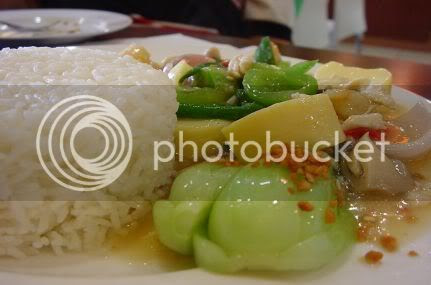 When we saw these Banana Bean Puffs on the menu, we ordered it straight away thinking it will be exactly like the wonderful puffs we ate at Crystal Jade before. Sadly they were not even close to them at all as these ones were soggy with oil! (For a visual comparison on what I mean, click on the Crystal Jade link) 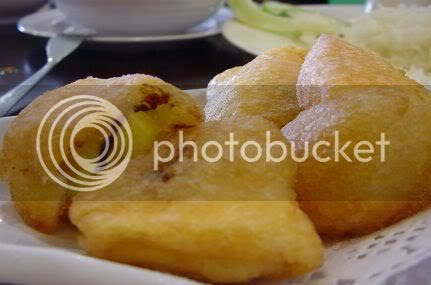 Another main meal we ordered were these Stewed Beef Noodles. Although the soup and the stewed beef was okay, the texture of the noodles wasn't too nice. 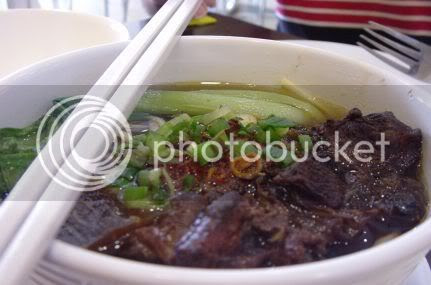 This looked interesting on the menu so we ordered it, the Pattaya Lai Fun. Lai Fun is a rice flour noodle usually used for laksas and it's the first time I have heard of people using it for stir frying. This was not too bad and the lai fun was quite soft. 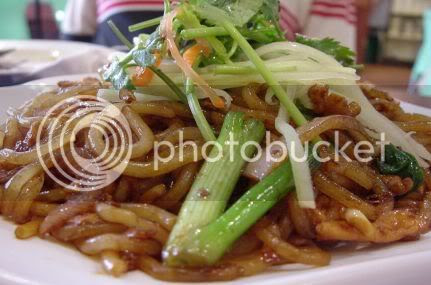 As the dishes were quite tiny and there were four of us, we re-ordered the Fried Cheong Fun with XO Sauce since we liked it so much and it was a disaster. It came wet and soggy totally unlike the previously fragrant and dry version. We suspect that it was not the chef who fried it but the apprentice as we saw them all chatting away outside.

Personally the whole lunch was a bad experience and even though it was a weekday, there were only two tables (including us) eating at the restaurant. The staff and the chefs were too busy chit chatting even though it was still lunch time since the place was quite empty and getting service was difficult. The only saving grace was this pretty nice waiter who was the only one running around taking our orders.

Honestly, I would not go there again since the food was pretty mediocre and the attitude of the people there irked me. Is it just me being fussy or have you had a good experience at this place? Let me know your experience of this place as I always believe food review is a very personal thing.
Golden Bread Cafe
No. 12, Jalan ss 2/63
Petaling Jaya

Tel No: 03 - 7876 1998
(They also have another outlet in Sri Petaling)
*Disclaimer: The opinions expressed here is entirely based on my personal tastebuds and may vary for others. The reviewer also declares that she has not received any monetary or non-monetary compensation from the restaurant for writing this review.
Posted by boo_licious at 6:05 AM

i nearly wanted to try it out after reading bout this cafe somewhere, but now i'm thinking twice!

rokh - dunno, I may have stumbled on them at the wrong time or ordered the wrong food?

Boo,
Is the story about cru(e)llers true? It is funny yet sad at the same time.

Nice place. Wish they had open a branch in Penang..;p

rabbit - no idea abt the truth of these stories or should I say, myths? I guess if bizness is good for them, they will open up one in Penang.

sri petaling where ar ?? u got addy anot ?