Every year just before Hari Raya Adilfitri starts, the sleepy suburbs of Taman Tun Dr. Ismail will be invaded by these smoke, people and lots of food when the lemang stalls start their festive business. Lemang, a Malay delicacy made from glutinous rice cooked in a bamboo tube over slow fire is a must have during the festivities especially with some rendang (Malay for meat curry in coconut milk and spices).

There was a carnival-like atmosphere around the area with stalls lining the main road leading towards 1 Utama Shopping Centre with cars stopping at the side to buy lemang for their festivities or even non-Muslims enjoying the delicacy. 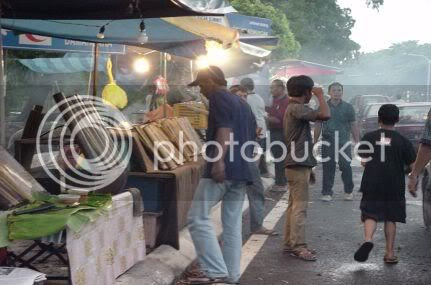 Who says there is no traffic jam in Kuala Lumpur as everyone has "balik kampung"? (Usually the city is almost empty as people travel to their home towns) There were lots of cars along the main road which had to slow down as people were parked at the side plus they also wanted to drive slowly and have a look at the stalls. Note that this stall at the end was selling flowers and plants for the festive season. As the Kiara Malay cemetery is also nearby, some families will stop by to buy flowers to place at their lost loved ones' grave. 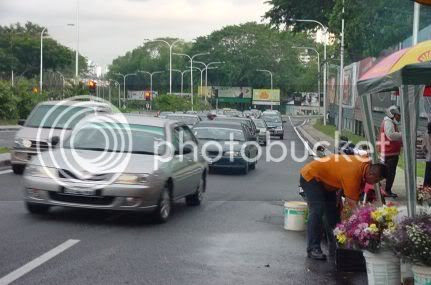 See those rows of bamboo sticks, they all contain the lemang which has been slowly cooked over the fire. Imagine a whole row of stalls each selling the same thing and your mind boggles on which one stall to go to! 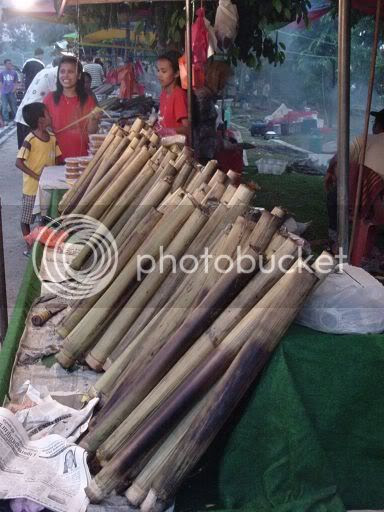 There is a kind of carnival atmosphere to the area with so many stalls and some set up their preparation area at the grassy bit at the back of the main road. Here you can see the lemang being cooked over a fire. They stack them up on a rack and the fire will slowly cook the rice. It takes quite a bit of skill to ensure the whole rice stick is cooked. This family even set up a tent just like they are camping for the kids to play and rest while the parents work on making ketupat and lemang to sell at the stalls. 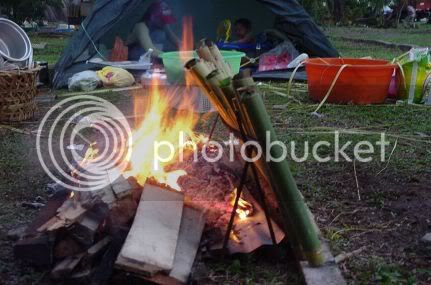 This lady was sitting at the back and making ketupat cases while chatting away. She was so deft in making the ketupat cases from the palm leaves that I had such a hard time focusing on her movements (see how blurry the ketupat case is in her hands). She made those two ketupat casing for my earlier posting. The ketupat will then be filled with rice grains and then cooked in a large pot of boiling water until they are cooked. I had earlier blogged about something similar called ketupat daun palas together with lemang when I found them at a farmers' market before. These ones the lady was making looked more like ordinary ketupat rather than ketupat daun palas which is filled with glutinous rice. 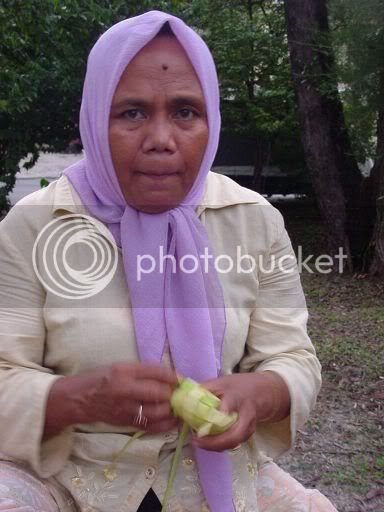 Of all the stalls I saw, this particular one caught my eye as it was not adults serving you the lemang but kids. The whole family was helping out with the dad working the lemang fire at the back. Although the younger boy was not helping, he was fascinated that I took his picture while his brother was busy entertaining customers for their lemang. 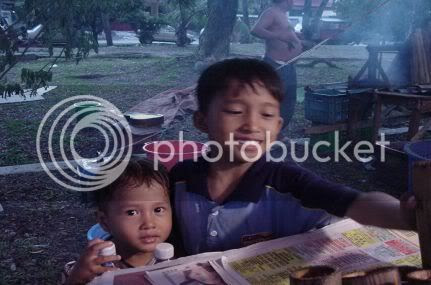 I counted four of them and the older ones; the girl was helping dish out the rendang to go with the lemang while the older boy was unwrapping the hot lemang to wrap them in newspaper for people to take home. Maybe people were also attracted to these kids as they were doing brisk business compared to the other stalls. 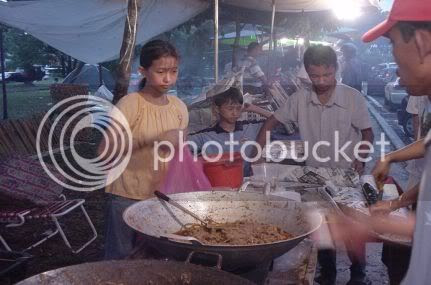 This is essential for your lemang: rendang which has been slowly cooked with spices, lemon grass (can you spy the shreds?) and coconut milk. There will be two varieties served, beef and chicken which you can pack home to enjoy with plain rice, lemang or the ketupat daun palas. 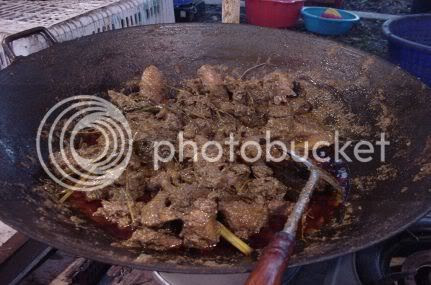 This is what the lemang looks like inside the bamboo tube. They will split open the bamboo tube to remove the long piece of lemang which is still in it's banana leaf wrapper. Then they will roll it in newspaper for you to take it home. Before serving, you cut them to pieces and place them on a platter together with a bowl of rendang on the side. 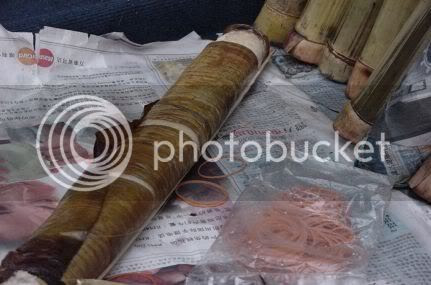 Although it was Hari Raya eve, some lemang fires were still going on throughout the night to cater for the latecomers and to finish up their supplies. Once they have finished, they will pack up to go home for the festivities. 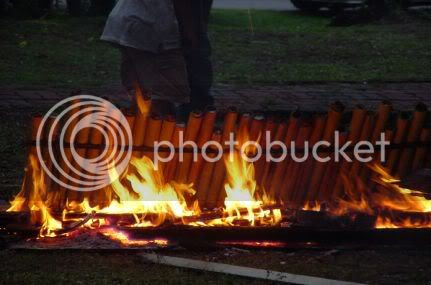 Nice! I ate lemang too. And just blogged it.

Had 1 slice of lemang and 1 piece of ketupat daun palas (can't have loads as they always make me drowsy, not to mention fattening) with serunding.

rabbit - yes, it did feel very raya but it was so smoky though.

lilian - you're back from your hols!

skyjuice - I had a piece of ketupat daun palas today, no lemang though.

boo_licious,
hi.
tks for ur posting
I was looking for a picture of lemang and the search led me to ur blog.
its a great blog.
sorry, but i have since use one of your pictures, with a bit of editing, in my blog.
i did credit it to you. but again, tks
Selamat Hari Raya
i am at http://kionsom.blogspot.com