We discovered a little gem of a place during a shopping trip to Damansara Perdana on Sunday. Being totally unfamiliar with the area, we thought of trying out Umai-Ya, a Japanese restaurant but it was closed. Then it was Mum's Place, but they served a limited menu in the late afternoon so we decided to try this place I had vaguely remember reading about in the papers.

It was a great choice as the place was quiet and cool from the air-conditioner which provided us a nice little haven from the hot sunshine. The place is nicely decorated with pictures of cakes all over the walls and there is even one wall full of rolling pins! Even the menu has a rolling pin holding it together.

Originally we wanted to order their pies but the server told us they were freshly prepared and we will need to wait half an hour. As we were really hungry (it was almost tea time already), we decided to order the pastas instead. 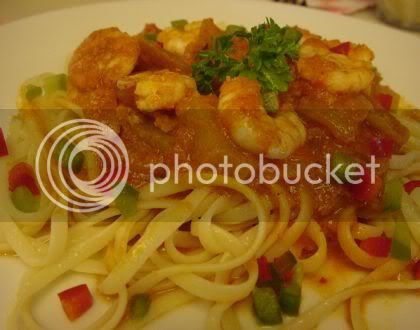 I had the Prawny Pleasure which is linguine tossed in a laksa gravy, prawns and bits of red and green capsicums. I love the unique sauce as it wasn't too spicy but was so different from the usual tomato sauce. 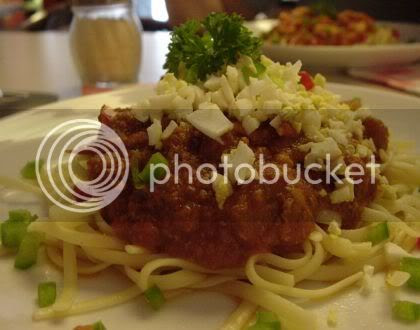 Splashie Boy had the Highly Hawaiian Pasta which had pineapples tossed in a tomatoey sauce topped with hard boiled eggs. An interesting combination of items(!) but he seemed to like it. 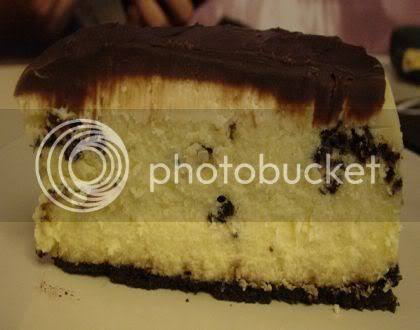 When we walked in, we saw a glass counter full of cakes and cheesecakes so I sent Splashie Boy to pick out a dessert for both of us to share. He sure has excellent taste as the Fudge Top Vanilla Cheese he chose was superb. It tasted really moist and fresh as we had the first slice from a fresh cheesecake. I spied other cheesecakes that looked really good too like the Mango Cheesecake, Cranberry Cheesecake and a chocolate cake called Chocolate Heaven.
I'll definitely come back for some cheesecake as they make them so well here. Moreover, I want to try out their Mango Cheesecake. The good thing also about this place during Sunday is it's pretty quiet and easy to find car park space so you get to have a pretty hassle-free lunch or tea. I guess the only problem will be getting into the area as one will have to fight pass the crowds going to Ikea, the Curve, Ikano Power Centre and Tesco for their weekend shopping fix.
Slices & Spices
11-1 Jalan PJU 8/5F
Perdana Business Centre
Bandar Damansara Perdana
Petaling Jaya
Tel: 03 - 7728 1184
*Disclaimer: The opinions expressed here is entirely based on my personal tastebuds and may vary for others. The reviewer also declares that she has not received any monetary or non-monetary compensation from the restaurant for writing this review.
Posted by boo_licious at 4:51 AM

Gosh... the food looks voluptuous, makes me wanna grab it... Japanese and Italian food are my favs too..

hmmmm... laksa gravy spaghetti... giving me ideas... thanks for the inspiration! :)

Arggh...you make me hungry 'cos I haven't have breakfast yet. Now, a simply bread and butter just won't do anymore. I wanna laksa sauce!

hmm.... didnt really search that area and i've been there only once...somemore staying nearby...

thanx for the tips

Wow.... that place is near my house. I would definitely go check it out! Food looks dam good man

Oh-My-God! (to read Janice -FRIENDS- style). You're killing me boo! That cheeeeesecake! *eyes glazing over, unable to taype...* Did u see my pathetic dinner tonight??!!!

Laksa pasta sauce - what a brilliant idea. God - and it's more than a year before I can next go to Malaysia. Misery.

Cath - can't wait to see what you cooked up.

foodcrazee - you stay near there? I thought your hse is in Klang.

KY - you must eat a lot of cheesecake for you to get fat, you so skinny!

Lilian - so easy for you, Penang is laksa heaven!

lin - hope it tastes yummy for you. I'm now planning second trip there as I want to eat the cheesecake!

squeezeweasel - oh dear! poor you. Never mind, you can recreate the sauce and it'll taste just like you're in Malaysia.

even though i live pretty closeby, haven't explored the area much as it's not really accessible for a person like me. but i'll check this place out one day :-)

Unknown said...
This comment has been removed by a blog administrator.
6:34 PM

q and jackrokh - go try it out! I'm already planning my second visit there, hopefully this weekend if I have time.

Unknown said...
This comment has been removed by the author.
9:01 AM