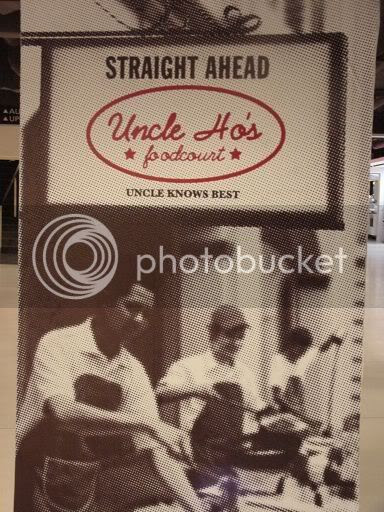 I couldn't help laughing when Splashie Boy said we will be trying the new foodcourt in Avenue K this week for lunch and it's name is Uncle Ho's! I didn't know that fella had branched into the food business following the success of his DVD/VCD empire. A lot of you may not know who Uncle Ho is, he is a fictional character (I hope he is!) from TV Smith's Dua Sen that describes a man who runs Malaysia's largest pirated DVD/VCD network.
Recently I have been making weekly trips down town to join Splashie Boy for lunch at KLCC. Since Avenue K is right next down to KLCC and connected vide the tunnels to the Light Rail Transit station, it was pretty easy to walk towards the foodcourt. (For those coming from the train station, just turn right at Kiosk and walk straight ahead) 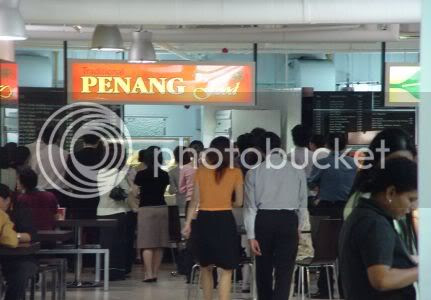 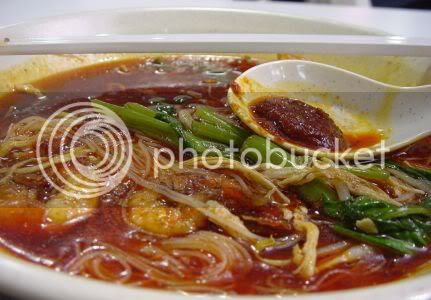 I picked the Penang food outlet on the basis there was a queue there so it must be popular. Then I totally picked the wrong food as I had their prawn mee which was swimming in a pool of oil. Urgh! She must have ladled all the oil that floated on top in my bowl! I am so not having this dish ever again as it was horrible. I must have ordered the wrong thing as the crowds were just rushing towards this particular outlet signifying how popular it is, maybe I should have eaten their Pan Meen instead. 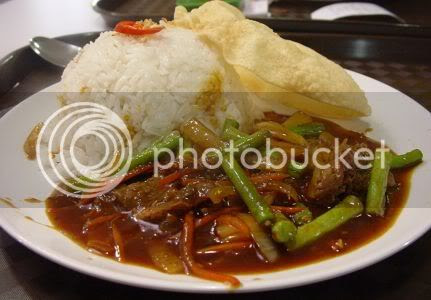 Splashie Boy had better luck with his lunch which was Thai Beef Paprik with Rice. This is a pretty common dish that is served in Thai fast food places in Malaysia, a stir fry of beef strips and vegetables in oyster and dark sauce. I had a bit of his beef and it was pretty tasty. Portions are quite small here but prices seem to be cheaper than the KLCC foodcourts. On top of it, there is a limited 15% discount on all food and drinks within the foodcourt. 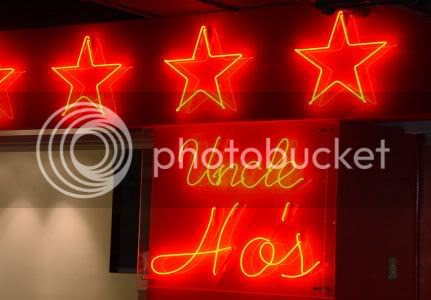 I liked their entrance, kinda reminded me a bit of the sleazy Uncle Ho of TV Smith. There is even an Auntie Ho that serves the drinks at the foodcourt. As I am new to the foodcourt, would love to hear any recommendations on what else to eat or avoid at the foodcourt. By the way, Little Penang Kafe has opened at the top level of KLCC (where Rain Nudle House used to be) and it's packed with people.
Uncle Ho's Foodcourt
Concourse Area
Avenue K
Jalan Ampang, Kuala Lumpur
*Disclaimer: The opinions expressed here is entirely based on my personal tastebuds and may vary for others. The reviewer also declares that she has not received any monetary or non-monetary compensation from the restaurant for writing this review.
Posted by boo_licious at 5:45 AM

Aiikk! U chose the wrong food huh? Hehehhe! Happens to the best of us. I never know what to order at food courts. (My hubby says I'm a restaurant kinda gal ie. likes to be served while sitting pretty on her ass!!) Well, don't blame me, the foodcourts here are SAD!

thaaniya - cannot keep eating at restaurants, sure pokai after a while.

u should call me and bring me there laa.. i work at tower 1!

Boo! Aw... I feel bad that the Penang prawn mee have turned out to be bad. Hope it doesn't create a bad impression of Penang ;p. They prawn mee here are not that oily...

rabbit - don't worry, I have eaten less oily prawn mee in KL. Think the lady did not stir properly.