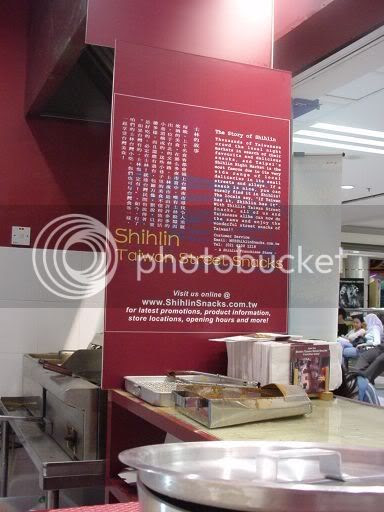 Remember in my Friday's post, I mentioned there is a new batch of "makan" places opened in 1 Utama Shopping Centre? Recently, I visited one more as I so wanted to try out their food after hearing all the stories vide the Net about how popular it has been in Singapore.

The Shihlin Taiwan Street Snacks is the brainchild of two young Singaporeans who sought to re-create the snacks they found at the famous Shihlin night market in Taiwan. They paid the Taiwanese chefs a five figure sum to learn how to make the snacks for two whole months. Now it's a booming franchise with outlets all over Singapore and the first outlet in Malaysia just opened this month. They sell three snacks; oyster mee sua, XXL Crispy Chicken and Chicken Floss Egg Crepes which are priced at RM4.80+ each. 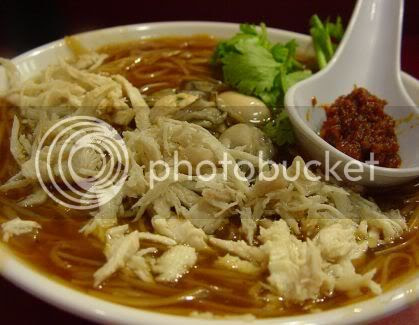 The place is super tiny and you'll sit around the service counter to slurp down your mee sua. It's near the Tanjung Golden Village cinema so you can pack the crepes in a paper box or the XXL crispy chicken in a bag and eat them at the benches along the shops while waiting for your movie. I had the oyster mee sua which came in a thick soup broth, easy to eat mee sua noodles (they had cut them), some oysters and shredded chicken meat. There is also a chilli sambal they serve you with. I was a bit doubtful about it when I looked at it but it was really yummy stuff and I enjoyed every spoonful of it. 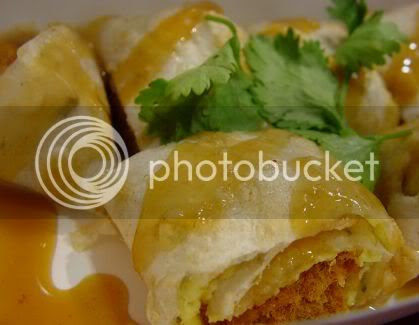 I was still a bit hungry after that so I ordered a chicken floss egg crepe. I thought I'll take a few bites and then pack them home but it was so yummy, I finished it all off. The crepe is a bit like a stretched roti canai except it's crispier and thinner with egg on top of it. They then add the crispy chicken floss and roll them. A sweetish brown sauce is also poured on top that complemented it. Excellent eaten hot and piping from the stove.

I will definitely come back to this place and eat. The only thing I did not try is the XXL Crispy Chicken - I saw them preparing it and it's really huge. They deep fry the chicken and sprinkle some spices on top of it. The only downside of this place is if you plan to eat your mee sua here, it's tiny and cramped. Not too sure if they will extend the back portion but I can envision that during peak hours, it'll be packed and you'll have to wait a bit for the food to be cooked so patience will be a virtue if you plan to eat here.
Shihlin Taiwan Street Snacks
Lot S54 (2nd Floor)
1 Utama Shopping Centre (Old Wing)
(Near Tanjung Golden Village cinema)
*Disclaimer: The opinions expressed here is entirely based on my personal tastebuds and may vary for others. The reviewer also declares that she has not received any monetary or non-monetary compensation from the restaurant for writing this review.
Posted by boo_licious at 9:10 AM

Everything looks yummy.. Is the food "Halal"?

boo, thanks for the review. now i know where to eat when i'm in one u. already sien with most of the food. lol

hi, the food there is absolutely yummy - spot on review!

t.ina - yes, this place is halal. Was served by a Malay lady at the outlet. Hope you'll try it.

rokh - yeah, I know what you mean about food in 1U, I get quite sick of the selection too.

j - you're a fan too? cool stuff! I heard the ones in Spore sell tau fu fah.

The mee sua looks really good. I made some at home once and it didn't turn out as good as this one looks. Mmmm.

what a great review - my fav is the oyster mee sua while hubby's the crispy chicken - yummy, I might just get some for dinner tonight!

reid - I'm thinking how to re-create that dish at home as I want to add more oysters in it.

cath - I keep looking at the pixs and that oyster mee sua is calling me! I am sure dinner will be yummy tonite.

Boo, oh so yummy! The egg crepes with pork floss look so irresistable... You are so lucky to live in KL!

Omigawd! Looks soooo yummy! I wanted to ask u if it was halal, but I see t. ina dah tanya. Double Yum!

rabbit - penang have super yummy hawker food instead so I guess trade off between living in Penang and KL.

Thaaniya - yeah, if you come down from Brunei, make a trip to 1U for shopping and lots of food.