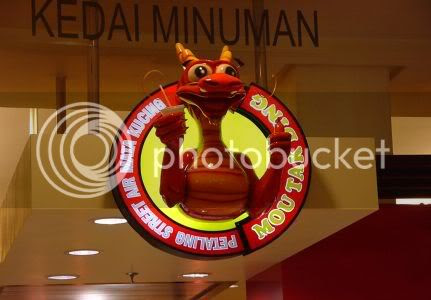 Recently when I was in Mid Valley Megamall, I spied this new stall at the Lower Ground area which was selling the famous Petaling Street Air Mata Kucing. Looks as though I'm not the only one as coincidentally Paul Tan also blogged about it yesterday. What really caught my eye was the design of their stall with the dragon motif everywhere. Not sure what is the significance of the dragon but it does look a bit like Mu Shu the dragon from the Disney cartoon Mulan. On the sign above the stall, he is giving the thumbs up sign while holding the drink. 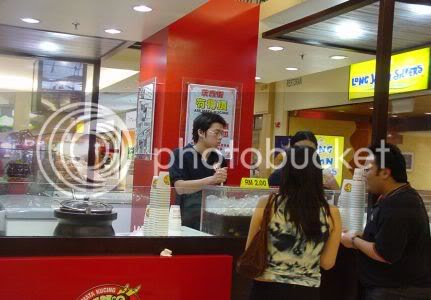 The refreshing drink is extremely popular in Petaling Street as one can cool down drinking it especially after walking around the stalls. They used to serve the drink in metal bowls which made it colder and somewhat nicer but that practise has recently been abandoned. 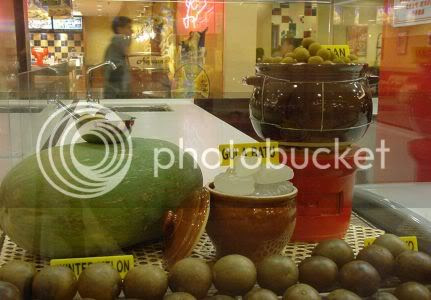 At the other end of the stall, they had a little glass display cabinet with all the ingredients to make the air mata kucing drink: winter melon, rock sugar, dried longan and Buddha's Fruit (luo han guo in Chinese). Traditionally these items are boiled in a claypot over a charcoal fire. See the little metal bowl with the ingredients inside on top of the winter melon, those are the metal bowls they used to serve the drink in. The term air mata kucing means longan drink as mata kucing is Malay for a type of longan we get locally. If you wish to try to make this drink at home, hop over to Green Apple as she made some recently when she was homesick for the drink. 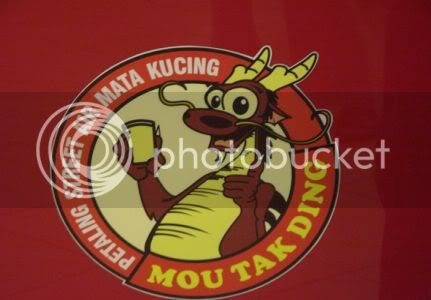 I just love their logo and it's everywhere on the stall and even on the plastic containers they serve the drink too. I interpret the dragon as them saying even the dragon who breathes fire loves this refreshing drink that can cool him down. Another thing that tickled me was the term, Mou Tak Ding on the logo and the fact the stall is owned by Mou Tak Ding Sdn. Bhd.. Mou Tak Ding means so good that it's unbeatable in Cantonese. It's not the first time that term has been used in the food and beverage world, in Taman Tun Dr Ismail, there is a shop called Mou Tak Ding claiming the hawker food they sell is unbeatable. Another rival shopowner then opened a shop nearby calling himself Yau Tak Ding (Cantonese for can be beaten) to show that his food is definitely better than the other shopowner.
Mid Valley Megamall seems to be the place to get modernised version of the Petaling Street snacks as somewhere along the stalls, there is also one stall selling the famous rice roll (chee cheong fun in Chinese) from Petaling Street. There will be more changes to the Lower Ground floor as Beard Papa (the old fella who sells those yummylicious choux cream puffs with vanilla beans) will be opening soon and hopefully the C-Jade Express (next to Yoshinoya) will also be opening soon as I love their pastries and snacks.

This weekend will be a busy one as it's the IMBB/SHF Cookie-Swap. Lots of cookies from all over the world to be featured and I can't wait to see what comes out from everyone's ovens. I spied some already over at Just Heavenly, as she made some cute chocolate cookie pretzels and green tea shortbread.
Posted by boo_licious at 9:30 AM

I love the famous `loh hon gor' at Petaling Street. When I happen to be there (which is like hardly these days) i always drink one bowl or two!

Great, must check out the one in Mid Valley.. So happening that place.. hehe, and I happen to go very often. :)

I think the reason why they chose Dragon as their mascot/logo is because in Chinese language "longan" means Dragon's eye. Oh well...that's my best guess.

rabbit - I think for tourists so they can see what goes into their drink.

jess - yeah I miss the cakes too but cannot as must go entertain contractors and ID people at the house.

tankiasu - I didn't know that and yes, that sounds quite plausible.

air mata kucing this is a kucing that i would like to try cause i love this type of food so i recommend this and also recommend Buy viagra cause this will solved all youre problems.