During the weekend, we did a bit of ramadan bazaar shopping for dinner and it was so fun. We ended up at the stalls in Kelana Jaya as I have not been there before. As it was drizzling and packed with people, I did not take any pictures and we concentrated on getting lots of yummy food. It was a huge haul we got and you can see the table is groaning with the amount of food. 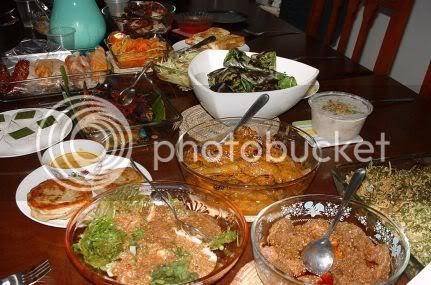 I decided to go back during daylight and when it was not raining to take pictures of the stalls and this time round I had lots of time to browse, walk around and even discover more things. This percik stall is the first one when you enter the bazaar. They have a unique way of hanging the fish i.e. on a metal rack. This is the bottom rack which has all the fish marinated and ready for grilling while the top rack (not shown) is for the fish which have been grilled. 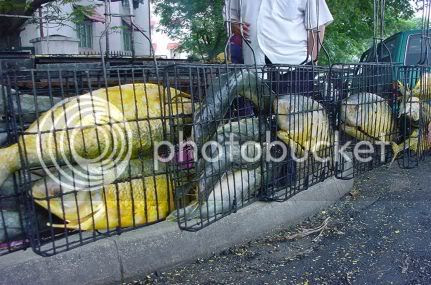 This is their ayam percik, grilled fish in a spicy coconut sauce which we had that night. The fish and chicken was excellent. 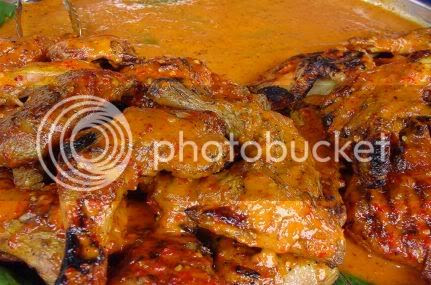 This is mango kerabu which was very popular (the stall had two trays and the other was already half way finished even though it was still early). Very yummy stuff and we prefered it to the som tam we bought. 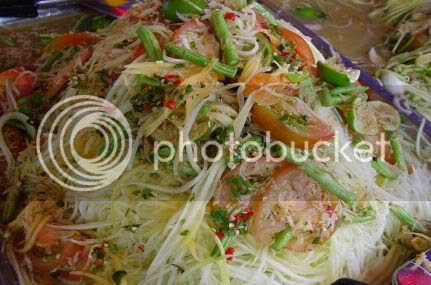 You see this cropping up everywhere nowadays, these stalls selling fried items on satay sticks. 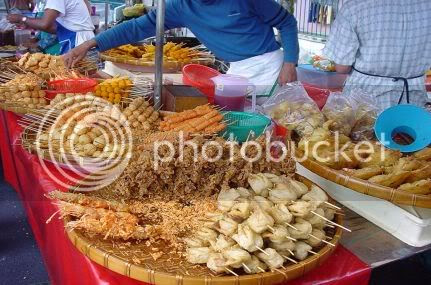 Beautiful rows and rows of sata on the grill. We had some of this which was not too bad. The stall owner told me he is from Terengganu. 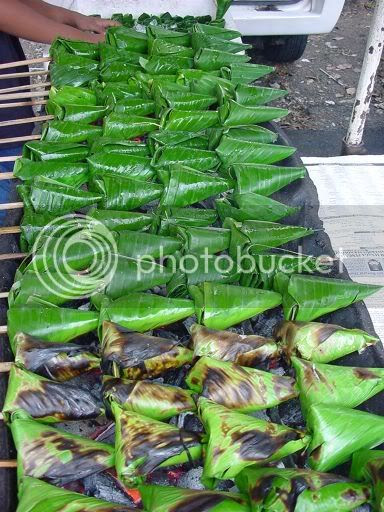 You also get this is almost all the bazaars, these huge woks filled with all kinds of fried noodles and fried rice. 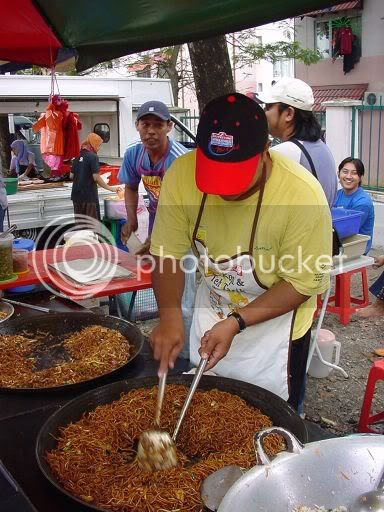 This is called gulai nangka or nangka curry where they use unripe jackfruit to cook in curry. It tastes a bit like potatoes as it is soft. 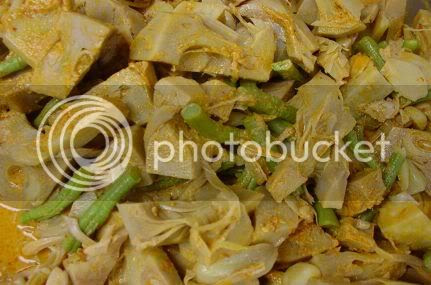 Tauhu bakar, where the tofu is stuffed and then grilled on a open fire. We bought some of this which was nice and crunchy. 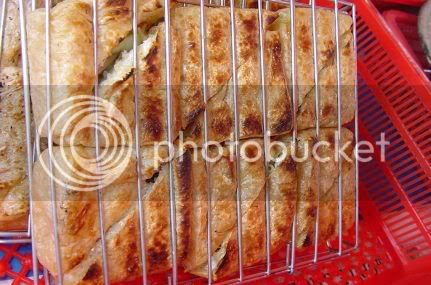 I have seen these before in night markets but this year only this ramadan bazaar seems to have it: deep fried bread. The bread is stuffed like a kebab and then dipped in a batter and deep fried till it is crispy. Here there are two varieties, a chicken and beef one. 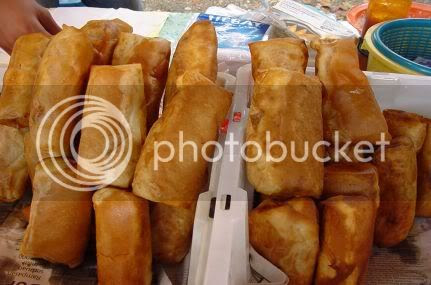 This is the famous keropok lekor that are special fish crackers from Terengganu which are chewy rather than crispy. These crackers are made from fish meat and flour and shaped like sausages. They are then cut in small pieces and deep fried. 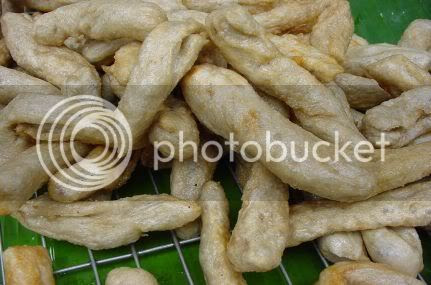 I passed by this stall selling a variety of chicken marinated in honey and grilled on an open fire. At first I thought it was chicken breast cubes, a closer look and zoom on my camera revealed that it was bishop's nose instead! I guess if you like that part of the chicken, this will be heaven as they do look beautifully grilled. There a stall run by some young guys selling all sorts of kerabus (salads) which we had bought a large selection from. They had different vegetables like pegaga (Malay for pennyworth herb), paku pakis (Malay for fern shoots), kacang botol (Malay for four angled beans), jantung pisang (Malay for banana bud flower) and even tripe. We also had another type called daun salon which I have no idea what is it's english name. Maybe some of you can help me out on that?

They were preparing the cencaru sambal which is mackerel fish stuffed with a sambal paste and grilled on a pan. We bought some which was pretty good too. 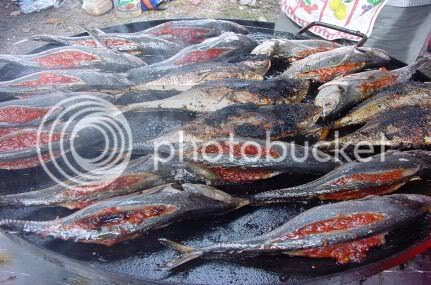 I was lucky to capture these pictures, as this trio of stall owners were making onde-onde on the spot. Here you have the lady rolling the dough and putting in the gula melaka (Malay for palm sugar) and then shaping them into balls. 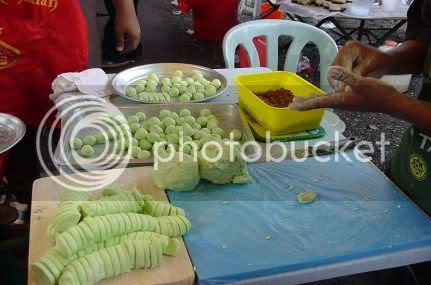 It is then boiled in a big pot of water and it is ready when it floats up to the top. 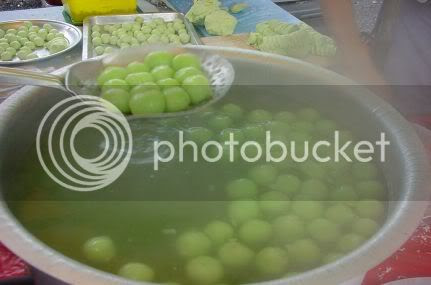 It is then tossed in freshly grated coconut and packed in little banana leaf cups. They were busy making them non-stop so some of my photos are a bit blurry with their movements. 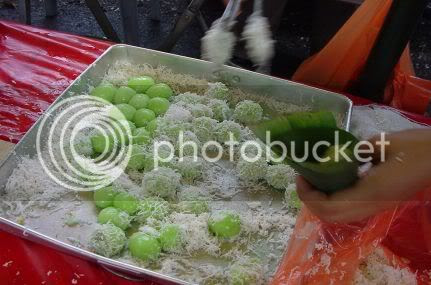 We had these little cakes that night and at first we thought they were like the putu bambu or putu piring. We were almost right as they used rice flour and grated coconut (inside) but there was no gula melaka (Malay for palm sugar) inside them. I asked the stall owner and she explained to me that it is called Putu and a specialty from Perak which does not use any gula melaka. 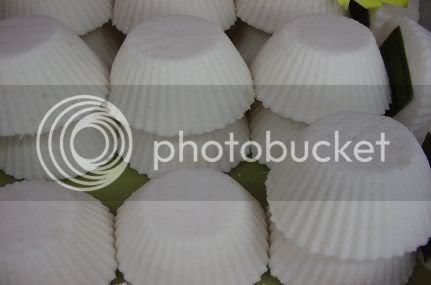 This is kek batik, a specialty during Hari Raya. I was introduced to this cake by Renee of Shiokadelicious when she made a beautiful one. Sadly this one is a bit mangled up after they had cut it up. It is essentially made from Marie biscuits and a dense chocolate cake mixture made from condensed milk, milo, eggs, sugar and butter. 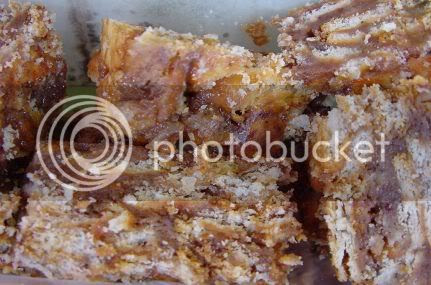 This is known as kuih tepung kacang or gomak, which is a Kelantanese sweet that reminds me a bit of lor mai chee but flatter. The dough is made from rice flour, it has a coconut filling and tossed in green bean flour. 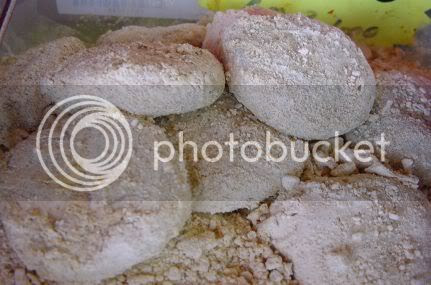 Besides the usual Malay cakes, there was a stall selling cheesecakes, cheese tarts, fruit pies and chocolate fudge cakes and brownies. 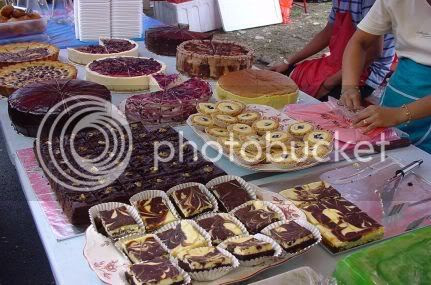 I have heard quite a bit about Lompat Tikam, a traditional Kelantanese dessert so I bought some. Had to take the picture at home as it came in assorted bits and pieces. The green bit is a pandan custard while the pink ones are glutinous rice. You dip them in coconut cream that is sweetened with gula melaka (Malay for palm sugar). I thought this one was a bit tasteless so I guess I must keep searching for some nicer ones. Any suggestions on where to get good Lompat Tikam? 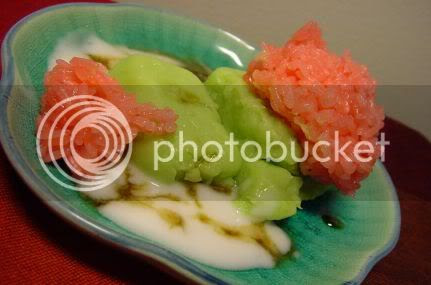 I did not take pictures of the stalls that sold ayam golek or the beef rendang but do try them out at this bazaar as they were fantastic. The chicken was juicy while the rendang was so popular that we finished it that night. Glutton Rabbit has also visited an excellent ramadan bazaar at Alor Setar so do hop over to her place to view those pictures.

Ramadan Bazaar Kelana Jaya
Jalan SS6/1
(Near the old/mini Giant Kelana Jaya, on the road next to the flats that face the main road where Giant is)
Starts from 4 p.m. to 7 p.m.

as usual, i enjoy your photos and descriptions. thanks,
paz

Thanks for the photos.

Kuih tepung kacang or gomak is known as abuk-abuk here in Perlis & Kedah.

Paz - thanks for dropping by.

skyjuice7 - thanks for the info. As I don't know much about kuihs and etc, I do my research on line so if I don't get it on the Net, I have no idea what the things are.

always such great photos... if i lived there i would be 500kg from wanting to try everything LOL delicious interesting cuisines

Hey u are really famous now.. for ur Ramadan Bazaar at least. A friend of mine happens to be your ardent reader. Check out his latest post ;)

catesa - Being a multi-cultural country, we are pretty lucky as we get lots of holidays and great food. Luckily we sweat a lot out as the weather is so hot.

jess - he must be a foodie too.

Wow, I think I can faint from all these delicious looking cookies. Your post makes me want to check these bazaars out!

mycoffee - you still have 2 weeks more to check it out. Hope you enjoy yourself.

Obachan - maybe it is time for a little holiday to Malaysia?

I've been searching high and lows for pics of Bazaar Ramadhan and found your site to be one of the BEST! Keep up the great work...Love all ur yummilicious food pictures.I'm a Singaporean food blogger , searching for HALAL food. I've listed ur wonderful site in one of my post. http://putri-berendam.blogspot.com

Skyjuice7: Daun salon IS NOT daun salam. They are both of different type. Daun salam is bay leaf. Daun salon or commonly known as 'daun selom' is called 'water celery'. It is a herb plant. The scientific name for it is 'Oenanthe Javanica'. It is used to be consumed as vegetable salad for thousand of years. Daun Selom has a very high anti oxidant activity. If consumed daily as herbal supplement, it will prevent chronic degeneric diseases as well as boosts the immune system.