I finally made it to the famous Ramadan Bazaar at Kampung Baru which is touted to be the biggest in Kuala Lumpur with 200 stalls. I have divided this bazaar into two parts; the Jalan Raja Muda Musa stalls and the Jalan Raja Alang ones as I took quite a number of pictures. If you want to get a complete list of all the other Ramadan Bazaars' location in Kuala Lumpur, try this website that is run by the city council.

Kampung Baru is basically a Malay village right smack in the middle of a bustling city centre. In this area, you get typical Malay wooden and brick houses amid modern skyscrapers. During Ramadan, Kampung Baru is famous for it's Bubur Lambuk (Malay for rice porridge) which is cooked at the local mosque and distributed for free. The rice porridge is cooked from rice, coconut milk, spices and herbs. I stumbled on this man who was cooking a large pot of it when walking through Jalan Raja Muda Musa and he advised me that the porridge takes three hours to cook. During that time, he has to constantly stir it or else it will burn. I had a quick peek in the pot and notice there were cloves, cardamon pods, star anise and pandan leaves scattered inside it. His version has minced meat in it. 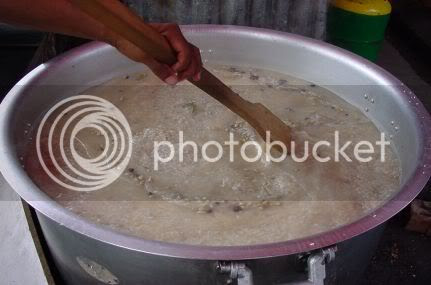 There were various fried popia/spring rolls for sale; plain ones and these spicy ones called Popia Pedas (Malay for spicy fried popiah) that is tossed in a sauce with sesame seeds. Another version I saw had a rojaklike sauce with ground peanuts sprinkled on top of it. 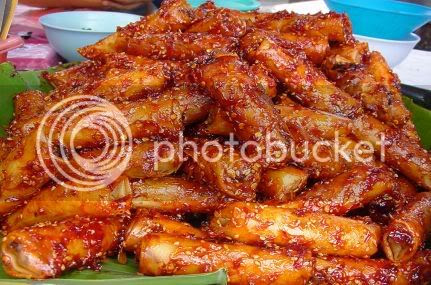 This is one of my favourite Malay dishes, Kerabu Sayur (Malay for vegetable salad) that consists of toasted grated coconut (kerisik) and vegetables that are tossed together. 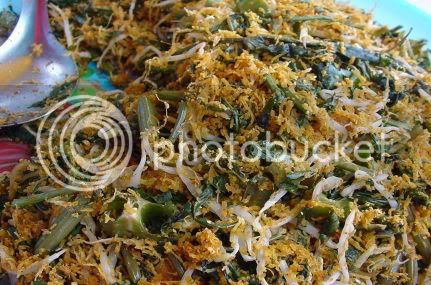 This is Pulut Serunding which is basically glutinous rice balls rolled with serunding. Serunding is usually made in Kelantan, a northern state and there are various types; chicken, beef and fish. It is a floss that is made from spices and toasted grated coconut (kerisik). Usually you eat it with lemang. 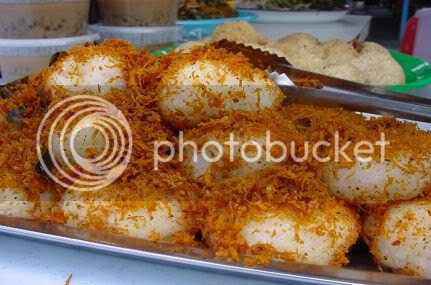 The food in Kampung Baru seems to be not only Malaysian but Indonesian as there was Javanese food being sold at the stalls. A nice Indonesian woman explained to me in detail about Pecal, which is vegetables (per the platter) and tempeh tossed in a sauce made from chillies, tamarind, belacan and shrimp paste. It is then scattered with some tiny crackers (those multi-coloured ones)

This was something unusual, a different style of Tauhu Sumbat (Malay for stuffed tofu). It looks like they had stuffed the tofu and then deep fried everything together. 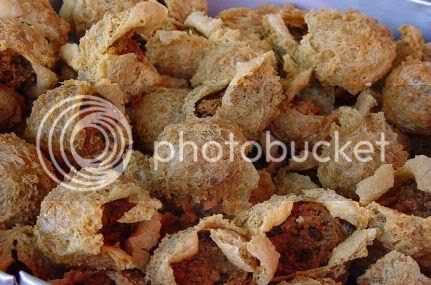 I had blogged earlier about the savoury Kuih Cara, these green cakes are the sweet type that is flavoured with pandan and has a sugar syrup inside them. 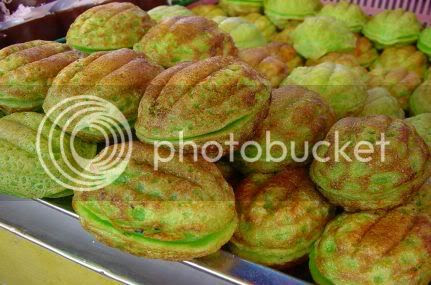 There was this delightful little stall selling Kelantanese desserts which was like Songkhla Hawker. The stall had so many desserts, it was difficult to stop taking pictures of all of them but here is a selection of some of the items. This is Akok which is made from gula melaka (Malay for palm sugar). The other kuih is called Cik Mek Molek is made from mashed sweet potato that is deep fried and filled with a syrup. I had a piece of this which was pretty nice.

This dessert is called Putih Naga (Malay for white dragon) that is a slice of banana wrapped in tapioca and steamed. It is then tossed in syrup soaked freshly grated coconut. I had a piece of this which was also quite nice and surprisingly not that sweet. 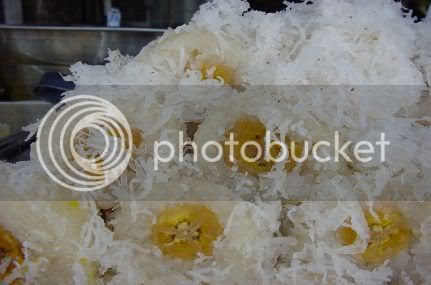 I took an earlier picture of this at the TTDI Ramadan Bazaar but this time round, I got a great picture of it and it's name. It has the unusual name of Puteri Mandi (Malay for Bathing Princess). It is basically coloured glutinous rice balls tossed in freshly grated coconut and coconut milk. This version is topped with slices of jackfruit. Besides these desserts, the Kelantenese stall also had steamed pumpkin and bananas tossed in syrup and various coconut milk desserts (bubur manis). 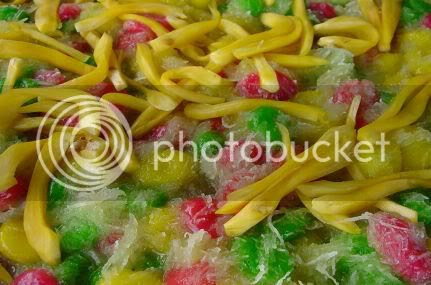 These multi-coloured cakes are called Kueh Lapis (Malay for layer cake) that is made flour and coconut milk. 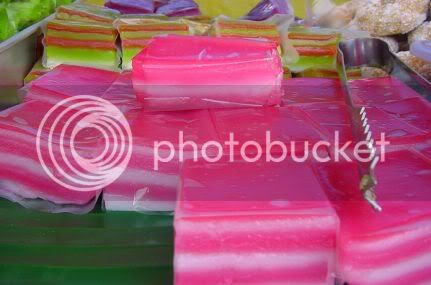 This is called Badak Berendam (Malay for wallowing hippo) as those green balls are said to resemble hippos wallowing in the river of coconut milk. The balls are made from glutinous rice and have a stuffing of grated coconut and gula melaka (Malay for palm sugar). 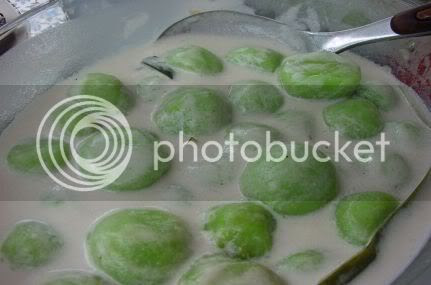 Ramadan Bazaar Kampung Baru
Jalan Raja Muda Musa
(Take the LRT to Kampung Baru station, exit at the Jalan Sungai Baru entrance. Turn right once you reach the road and walk down with the flats on your right. At the crossroads, you can either turn left or right as this is Jalan Raja Muda Musa. The stalls are all around the roadside)
Starts around 4 p.m to 7 p.m.
Posted by boo_licious at 6:45 AM

Thanks for these wonderful posts and photos of the Ramadan Bazaars. It's fascinating for me!

Paz - it's even fascinating for me too and I am a local. All the varieties of food is mind boggling.

boo - It is so, so mouth-watering. I have never seen some of those foods. Isn't it a pity these aren't sold all year round? Some of the makciks could make lots of money if they do it on a permanent basis.

Boo, Wah liao!!!! you visiting all the Ramadhan bazaars ar?? kewl!!! hehe!
It's been ages since I last checked one out...mebbe I shud. I miss the ayam percik!

never did go to ramadan bazaars when I was in malaysia. now I can just look at your pretty pics :(

5xmom - I suspect some are sold all year round at the night markets at these places. Not too sure but the selections are fantastic are this bazaar.

pk - do go, each bazaar has ayam percik so not hard to get them. Love the pixs of your seafood dinner.

turtle - I never been to so many too so I thought I better do it quickly or else I have no idea when I have the chance.

The tauhu sumbat you referred to is actually indonesian styled stuffed tow pok. In Sundanese Restaurant they call it taupok goreng isi but I think it is called tauhu kipas in Indonesia.

Btw it is sold all year round at the junction food court beside the mee rebus stall.