I have been cooking up a storm this whole weekend and I hope I am not too late for this month's Blog Party with our lovely host, Stephanie from Dispensing Happiness. I missed the second edition but I am determined not to be left out from the third one. This month's party is all about the Big Game (yeah!) which is such a great theme.

One thing Splashie Boy and I love is Formula One Racing and every race weekend, you see both of us right smack in front of the telly looking at all those whizzing cars. This year, we started watching the races with a group of friends at a restaurant cum bar which has a big screen television and it is such great fun. Sadly the race season has ended last weekend but the great thing is Renault won the Constructors' Championship and Fernando Alonso was crowned this year's World Champion. It was a close race with Mclaren Mercedes but they triumphed over them at the end. 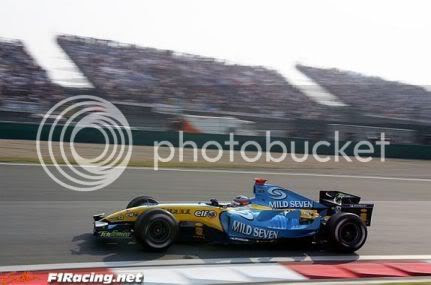 In honour of the World Champion who is from , I thought I will do some Spanish Tapas dishes for my blog party. Here's the spread for tonight: Slow-Cooked Tomato Squid, Tortilla and Pomegranate Juice. 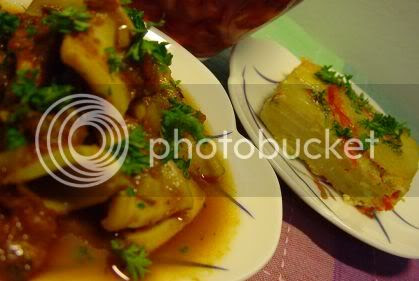 The first tapas dish was this yummy Slow-Cooked Tomato Squid that smelt so great with tender squid. It is pretty easy to make and just involved simmering the squid hoods for thirty minutes in a fragrant tomato sauce. I used some lovely paprika that a friend had given me from her recent trip to and omitted the capers as I did not have any. The recipe is from Donna Hay.

400g can of diced tomatoes 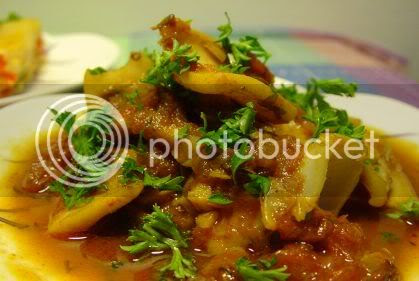 This is essential whenever you go to a tapas bar, tortilla. This version from BBC Good Food is low fat as it omits the cream and instead of cooking it on the cooker, you bake the tortilla. The tortilla on it's own is yummy and went beautifully with the squid and it's sauces.

Preheat oven to 180C. Heat 2 tablespoons olive oil in a pan. Tip in onion and potatoes and fry gently for 20 minutes until potatoes are tender, turning frequently, adding garlic and peppers for the last 5 minutes. Tip into large bowl, season and allow to cool for 5 minutes. Stir in the eggs, chilli flakes and parsley. Leave to sit for 5 minutes, then put a non-stick 20 cm square pan in the oven to heat up. After 5 minutes, remove from oven and brush with oil. Pour in egg mixture and return to oven. Cook for 15-20 minutes. Once cooked, remove and cool for 5 minutes. Turn out on a board and cut into squares to serve. 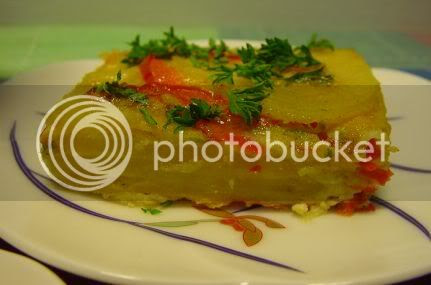 For drinks, as I did not have any red wine in the house to make sangrias, I made a pomegrante drink instead. Just a simple splash of juice from the packet but I added a touch of as I had some fresh pomegranates from . They are a bit different from the ones I got before from as these ones are a pale pink rather than jewel ruby red. They make it up with their sweetness as the Indian ones can be a bit tart. 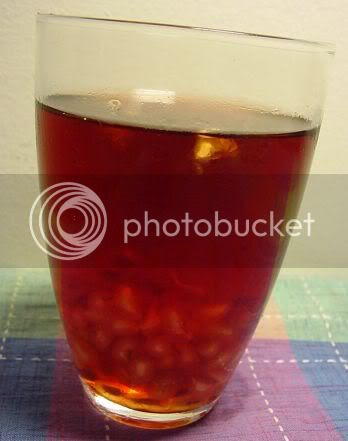 Thanks to Stephanie for hosting as I had great fun with the food.

The round up is online, so hop over to Stephanie's at Dispensing Happiness to view those yummy snacks and drinks.

Honestly, I’d never expected to find a F1 fan among foodbloggers. I used to be one (I even had a Maclaren－Honda T shirts!) but I stopped watching the game after Senna’s crash.
Your party sounds and looks gorgeous! Thanks for sharing :)

Boo,
I used to watch F1 during college days, but now not anymore...
I would love to try your tortillas and pomegranate drink! They look absolutely yummies...

What a fun time with fun food! They really look good in the photos. ;-) I had a fresh pomagranate over the weekend. It was good but messy to eat. ;-)

obachan - I'm glad to find a F1 fan among the food bloggers and wow, you have a tshirt from those days too.

rabbit - I started watching F1 since they came to Malaysia. Glad that you are also a fan.

Paz - I know they are messy to eat but we have so many this time round that I can't resist trying them. The Spanish ones are so juicy.

paz - I must go get some more this weekend.