Not too sure if all of you are sick of the Ramadan bazaars but this should be the last entry. I do want to make it to the Jalan Tuanku Abdul Rahman one but that depends on if I have time so if I get there and see anything nice, I will blog about it later on.

Before I go to the food, I thought I will tell you about some Raya celebrations around town. We were at the Curve last weekend and we stumbled on their Raya celebrations. They had set up this lovely Malay house in their concourse and strung paper stars all over the shopping centre. People were taking pictures and you can even play congkak, a traditional Malay game that uses shells or seeds. There was even a little mini orchestra at the side with the traditional Malay instruments like the many types of gendang (Malay for drums). Not too sure if they have any other instruments but usually these orchestras will also have a flute (serunai in Malay) and a trumpet (Nafiri in Malay). Unfortunately they were not playing at that time but we did catch another kind of performance. 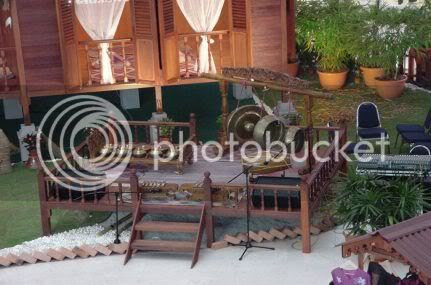 They had these traditional Malay dances in front of the house which I caught that afternoon. Here you have the ladies doing their gentle dance moves right in front of the men who are waiting for their turn. 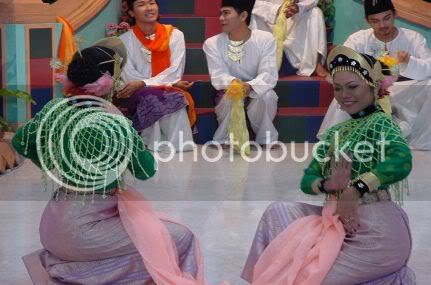 Then it is the men's turn and they were dancing quite energeticly across the floor. Funny costumes though as they had the bright pink plume of feathers on top of their songkoks. They have quite a lot of other performances lined up during the weekend so if you wish to see them, do drop by. 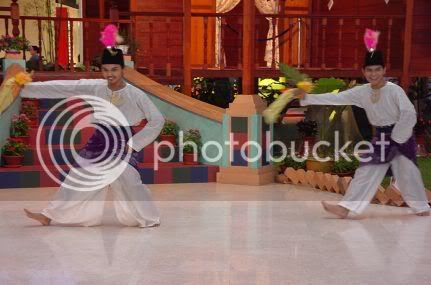 Back to the Shah Alam stadium's ramadan bazaar, it is enormous! I saw rows and rows of stalls that I was a bit overwhelmed as it took quite a bit of time to walk the whole place. I didn't take many pictures as I was with Splashie Boy that day and he was giving me that look which said, do hurry up and not dawdle around. The Shah Alam municipal council officers were at hand to make sure everything goes smoothly and I asked them how many stalls there were and he said around 300!

Okay on to the food, another Chinese influence that seems to be quite popular with the Malays is their version of Chau Kuih. The Chinese call these chinese crullers, Yau Chau Kwai or Golden Devil. These are excellent with a hot cup of local coffee or eaten with porridge and in Hong Kong, you can dip it in hot soya milk. I love the Hong Kong version as they wrap rice flour sheets around the cruller to make char leong for breakfast. Not only has the Malays borrowed the idea of the chinese crullers, if you make a trip to Thailand, you can see something similar at their street stalls. So far, I have seen them at Haadyai and Bangkok but they look more like small rounds instead of the thin type as seen below. 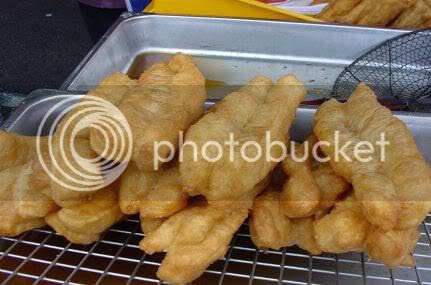 This stall was making all kinds of deep fried pandan leaf chicken from different parts of the chicken. What caught my eye was their deep fried pandan leaf quails (Burung Puyuh Daun Pandan in Malay) that looked good. I was tempted to get some but I had to walk on as there was two more rows of stalls for me to look around. 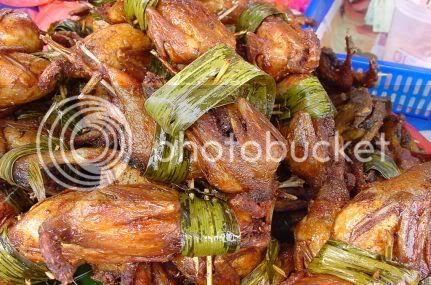 I had blogged about this earlier but this is the first ones I have seen so far in a Ramadan Bazaar, the ketupat daun palas. The bags on top contain serunding, the meat floss that you eat with the ketupat. 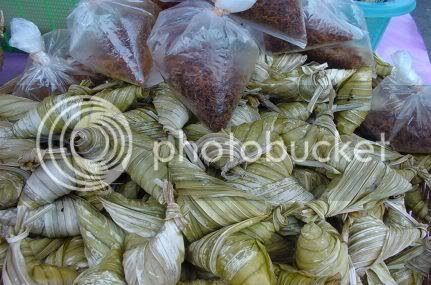 Besides the usual fare of ayam percik, murtabak, roti john, nasi kerabu and dagang, the Shah Alam bazaar stood out as it was the only place so far I have been to that had this Masakan Minang or Padang. This kind of cooking is special to the Minang people from Negeri Sembilan. They are influenced by the Sumatra people as that is where the Minangs were originally from and it is known as Padang food too. They will cook their food in these big woks and you can choose from a large selection of dishes. 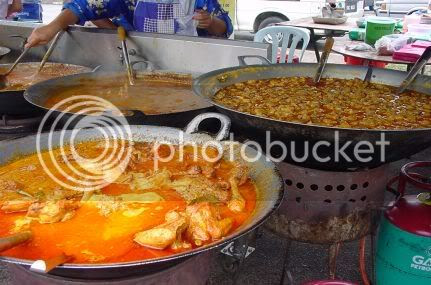 There were stalls selling various coloured drinks and for the first time I saw them selling fresh fruit juices including carrot juice with milk. We stumbled on one stall selling this air katira from Johor, a light green coloured drink which we bought and tried. It is supposed to be dates blended with soya milk and has raisins, selasih (basil seeds) and barley in the drink. We liked it quite a lot and we did see something similar at Kelana Jaya but it did not taste as nice as the Shah Alam one. 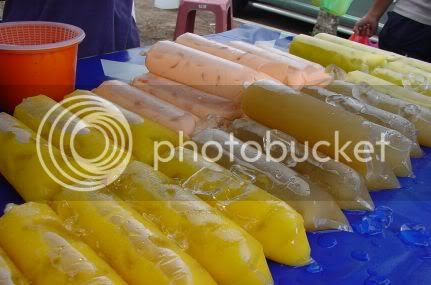 More multi-coloured agar-agar including bright blue ones. I saw at the nearby hypermarket that they sell the agar-agar strands pre-coloured in bright yellow and blue. 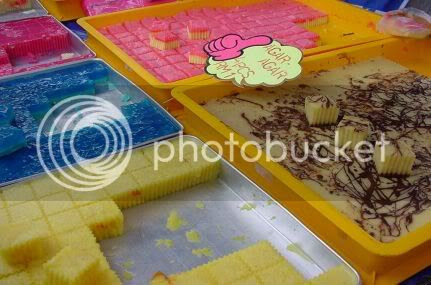 Here are some scary looking fish heads cooked in curry that one stall was displaying. Malaysians love fish heads and we eat them Indian style in curries like these ones, Nyonya style with tamarind and there is even steamed fish heads with soya sauce. 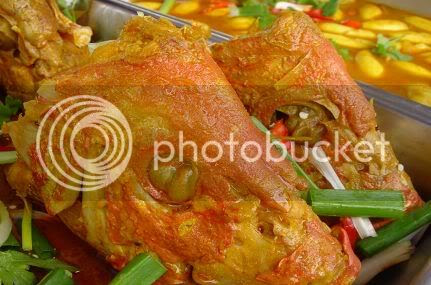 This lady had some interestingly decorated cakes, at first I thought they were cocktails as she had used the cocktail umbrellas to decorate her chocolate cake. 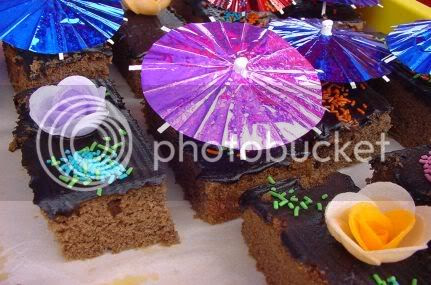 This stall was doing big business with their popiah basah (Malay for spring rolls) and there were so many workers rolling them simultaneously it felt a bit like a production line! Here you can see the rows and rows of popiah basah they had prepared ahead. 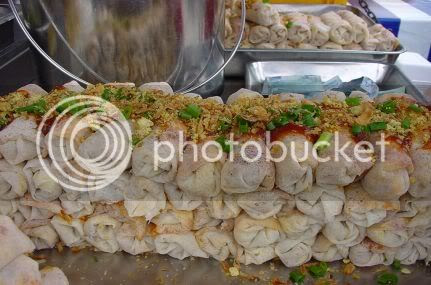 One stall was selling ketupat (Malay for rice cakes) still wrapped up in their leaves to go with the various types of rendang. I like these rice cakes with the peanut sauce you serve with satay. 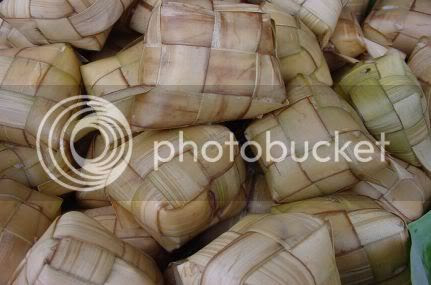 I have yet to see the lemang stalls, probably nearer to Hari Raya but I did see these cut up lemang made from glutinous rice wrapped in banana leaves that is grilled slowly in a bamboo tube. Excellent with serunding or rendang. 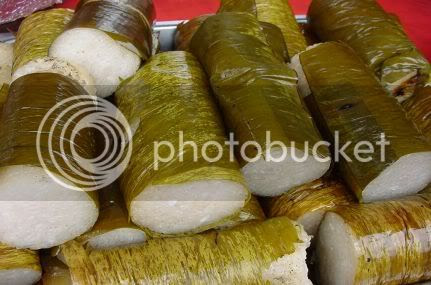 It is a big business at this bazaar and everything is huge. I saw rows and rows of ayam golek (about 5 of these contraptions) which were churning out these barbeque chickens. I read in one person's blog that during the peak time, the queue for these is horrendous. Can you see the contraption that rotates the chicken, it has a motor on the side and looks a bit like a bicycle gear? 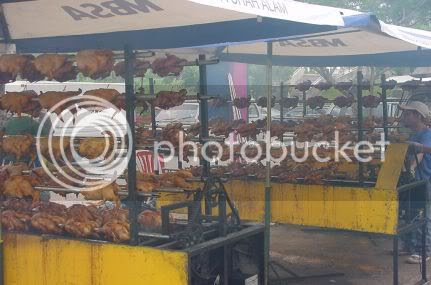 Not much food pictures but I was busy also buying food for dinner that night. You can get putu bambu from this bazaar (there are two stalls) which we bought but the one in Kampung Baru is much nicer. Before I left the bazaar, I saw these colourful balloons that put a big smile on my face. Hope you enjoyed my coverage of the bazaars!

By the way, if you have been to any Ramadan bazaars, I would love to hear from you about your experiences so send me a link to your site and I will put it up. 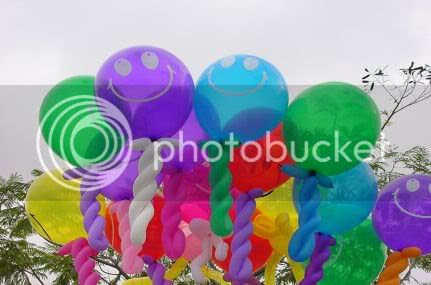 Ramadan Bazaar Shah Alam
(at Shah Alam stadium grounds/carparks between the Giant hypermarket and Makro)
Starts around 4 p.m. to 7 p.m.

was wondering what happen to some traditional food. Its so commercialize now that i think every bazaar will have at least 2 stalls seliing the same thing. Example - same old whole ayam percik. Had yet to see a genuine nasi kerabu around much.

Errr.. u do travel extensively for food.

foodcrazee - there are loads of nasi kerabu and dagang stalls in all the bazaars. They are a bit too hard to take pixs as the food needs to be plated. The Shah Alam place has nasi ambang which is quite unusual.

Those agar-agar cubes are so pretty and tempting! I just finished my late night supper, but I'm getting hungry again!!

WOW BOO
I just read the rest of the Ramadan posts I didn't finish last time :) THEY ROCK, thanks for sharing a unique piece of your culture that would be hard to experience otherwise :)

What were the ingredients inside those poppiah basah? Do you know?

obachan - they even had konnyaku type of jellies too that looked good.

clare - glad to hear you sound better and yes, the food does rock! More festival delights next week too.

anasalwa - hee hee, I also want some as I love those rice cubes.

Boo, I know I'm saying this again and again but this is true everything looks great! Great job!I like the the first photo. Kinda reminds me of wonderland!

rabbit - yes, I love those lights hence we took it from afar to get the effect.

Hi Boo: I went to the Shah Alam ramadan bazaar at the one nex to Makro (car park lot)

THE FOOD .... sucked man.. and there were no colourful jelly jelly...so disappointed la....

p/s- the Kampung Baru one? ok bo? I might head there this weekend n try out....