Yesterday was the first day of Ramadan which marked the beginning of the fasting month for the Muslims in Malaysia. During this month, they will abstain from food, drink and smoking during the day. In the wee hours of the morning before the sun rises, they will have a pre-fast meal during sahur. Then around the evening when the sun sets, they will buka puasa (Malay for break fast).
When they break fast, they will eat something sweet like dates or kuih-muih (Malay for cakes). Then they will pray before having their dinner. During this month, the community aspect is emphasised hence families and friends will gather for buka puasa dinners to meet up.

Throughout the Ramadan month, there will be bazaars with temporary make shift stalls selling a variety of local Malay food and drinks for buka puasa. I visited one bazaar at Petaling Jaya last evening and it was packed with people jostling to buy food and rush home before it is time to buka puasa.

At these bazaars, they will sell a variety of sweet drinks that come in multi-coloured hues. I saw a brilliant green honey dew drink, the more traditional sugar cane drink and even soya milk being sold. 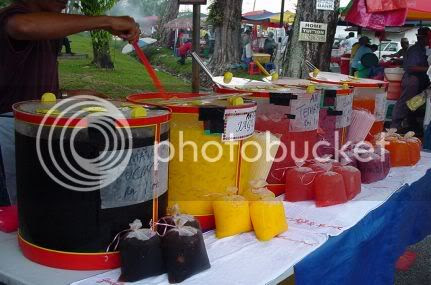 There will be various kuih-muih sold at these bazaars as you need something sweet to break fast with. I didn't take any close-up pictures since I did not get any but head over to Lilian's Malaysia Best as she took some beautiful pictures of the kuih pelita and kuih bingka at a Penang Ramadan bazaar. 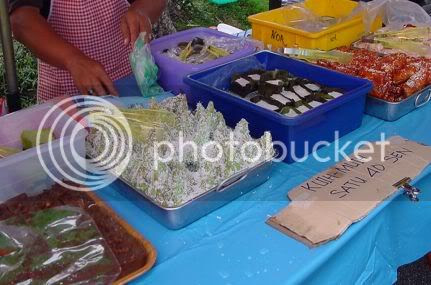 This is pretty popular even though it is more of a Western dessert, the Creme Caramel which is sold by individual pieces. 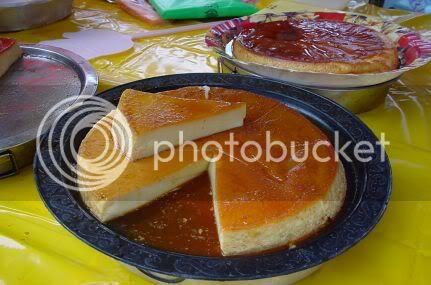 This is something unusual I came across. You don't usually get this at the bazaars as it is a Terengganu specialty called Sata. I had blogged earlier about it with what it looks like inside and a recipe if anyone wants to try their hand in making it. 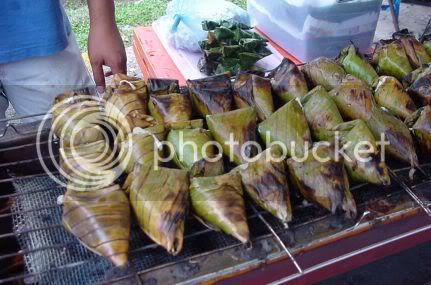 This is a pretty popular item in these bazaars, the Kelantanese Ayam Percik, where the chicken is placed between bamboo sticks and grilled on an open fire. It is then smeared with a spicy and sweetish sauce made from coconut milk and chillies. 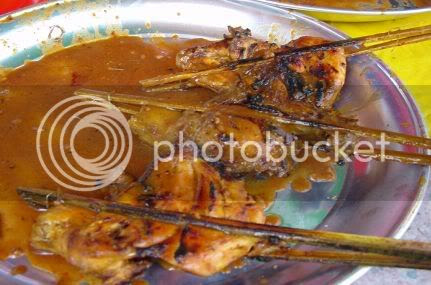 Another traditional Malay treat, satay that comes in two varieties: the darker beef and lighter chicken ones. At the back you can see the ketupat (Malay for rice cake) that is served with the satay and it's spicy peanut sauce. 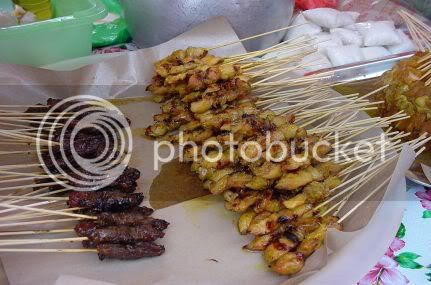 One of my favourites is the Ikan Bakar (Malay for Grilled fish) where they will grill fish like this ikan pari (Malay for sting ray) on banana leaves. Done right, the fish meat is sweet and infused with the spices it is smeared with. It comes with a sauce that is made from belacan, chopped onions and chillies. I bought these for dinner last night and it was wonderful with rice. 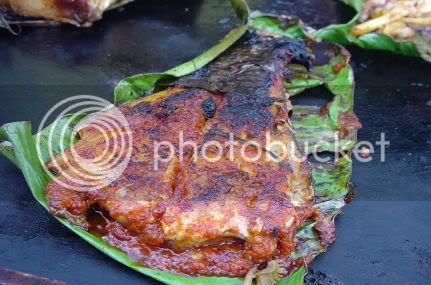 There was also Sotong Bakar (Malay for grilled calamari) which I also bought. Very yummy as the sauce gives it flavour. 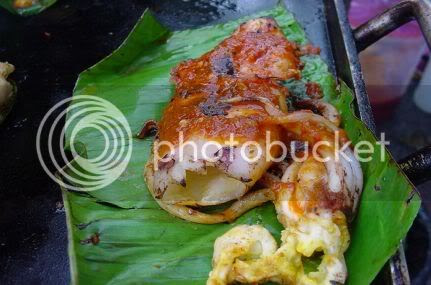 Usually these stalls are opened by home makers or even students looking to earn extra monies during this festive season. Some of the stalls are super popular with long queues of people. One of these popular stalls was this Popiah Basah (Malay for wet spring roll). There are two kinds of spring rolls, one is the wet variety which is just filled and wrapped in a spring roll skin. The other one is Popiah Kering (Malay for dried spring roll) which is deep fried. 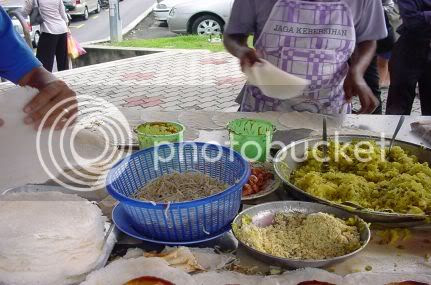 Another Malay delicacy is the Otak-otak, which is fish meat mixed with spices and chillies wrapped in banana leaves and grilled. It is spicier than the Sata which has grated coconut and can be sweeter. 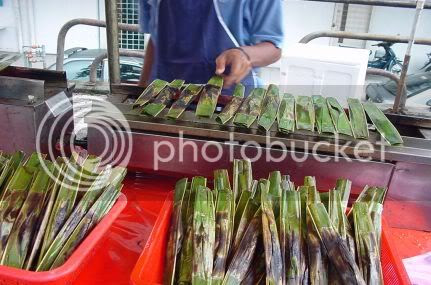 Ramadan Bazaar
Section 14, Petaling Jaya
(next to Utusan Melayu's office and near the mosque)
Starts around 4 to 4.30 p.m. onwards until 7 p.m.

good food blog! you know, one downside about the bazaar ramadhan is that it spurs every other timah, din & harith to set up a stall to take advantage of the hungry crowd. i find that we need to choose carefully to avoid ending up with mediocre food. will refer to your site for references in future :)

oreos - I usually go with the rule of thumb that if there is a crowd, it must be nice. What I observe for this Section 14 bazaar is the lontong near the popiah is also super popular. They also have sup ekor which is pretty unusual.

Your blog is really foodelicious!!! It's a very interesting read for someone like me who's interested in Malaysia's culinary traditions.
Please, come and visit my blog which is dedicated to international and Swiss cuisine...
Regards,
Rosa

Your photos make me feel like I’m actually at the bazaar! I’m fascinated with those ones wrapped with banana leaves and grilled. The banana leaves must give them wonderful smell. It’s so interesting that they put drinks in plastic bags!

Rosa - thanks for dropping by.

Obachan - yes the leaves give them a nice fragrance especially when grilled. They pack the drinks in bags so it is easier for people to buy them. Usually they sell them by the jugfuls as people buy for their families to share.