Recently I got a bit diligent in making things from my kitchen, I think I must have missed it since I had not cooked or baked for a while hence I made these blueberry swirl cheesecakes. The recipe is originally from September's delicious magazine (the Australian edition) that was for raspberry swirl cheesecakes. Sorry I can't post the recipe but Kits had a bit of chew at the magazine hence it is in a mess.

These mini cheesecakes are great for individual portions and extremely addictive with an oreo biscuit crumb base. They are very simple to make, the cheesecake portion is just whipped philidelphia cream cheese with eggs. I had pureed some blueberry filling I found at the bake shop and added it on top and swirled it with a toothpick. Not much blueberry taste there and it was more like a decoration there. The next time I plan to put a dollop of blueberry filling in the middle so it has more taste. The recipe still needs quite a bit of work as I need to perfect when to take these cheesecakes out (I did them when they had a slight wobble rather than cooking them through to avoid cracks).

Since there seems to be so many of you that want the recipe, I pieced back the chewed bits of the magazine for you all. He didn't chew off that much, only the side bits so it wasn't too hard.

Preheat oven to 170C. Line a 12 hole muffin pan with paper cases. (I used double paper cases to hold them better) Mix ground Oreos and butter in a bowl. Divide mixture among paper cases, pressing down well. Bake for 5 minutes, then remove and cool. Mash the raspberries to a pulp with a back of a fork. Strain through a sieve into a bowl, pressing down well, then discard seeds. Stir in the icing sugar.

Place the cream cheese in a bowl of an electric mixer and beat until light and fluffy. Add the caster sugar in a slow steady stream beating until combined. Add eggs, one at a time, beating well after each addition, then beat in vanilla. Pour cheese mixture over biscuit bases. Place small drops (about 1/2 teaspoon) berry puree on top of cakes and use a wooden skewer or toothpick to carefully swirl through cheese mixture.Bake for 10-15 minutes until just set Open oven door and allow cakes to cool completely in a switch off oven. (Note that it took more than 10-15 minutes on my oven, I baked it till it was wobbly in the middle and cooked at the sides). Once cooled, put in fridge overnight to chill and set. 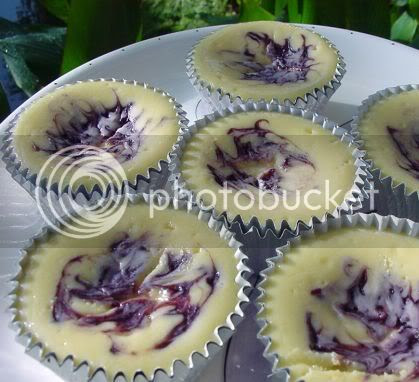 If I may ask, what portions of cream cheese to eggs did you use?

oh i would love to try making those. maybe there's a recipe somewhere on the web...

q and tiger - recipe is up. Do enjoy.