Yesterday afternoon, I decided to drop by Bangsar to do a walkabout at their Sunday night market and the Ramadan bazaar. To avoid the crowds I went there super early and I scored a fantastic parking space. It was great as the weather was sunny unlike the past week which has seen rain every afternoon. I even bumped into Mrs. ecr who was doing her shopping at the night market.
Before I went to Bangsar, I was a bit worried that I will not be able to get any good pictures at this Ramadan Bazaar seeing I had visited two others already but the first thing that greeted me when I walked in was this unusual sight of fish being grilled Sarawak style. Don't know if you can see clearly from the picture but they stick the cut bamboo inside the fish's mouth, making the fish look like some alien with that gaping mouth from this angle. It is called Ikan Terubuk Sarawak (Tunuk) which is grilled fish done in a special Sarawakian style. I read in last week's papers that the stall is doing brisk business since it is something special and the fish is marinated in a special sauce. 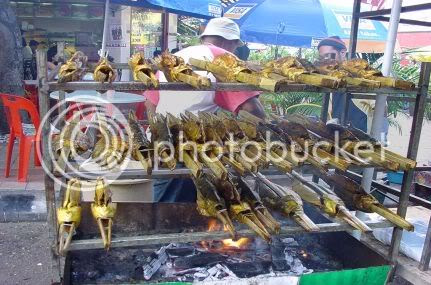 The stall owners were preparing their food in advance before the rush starts and making stacks and stacks of murtabak. The sauces are also all packed in small bags making it easier to pack them when people order their food. 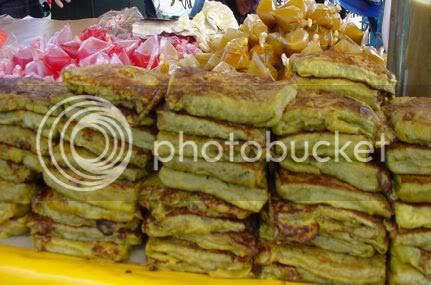 There is this stall called Sarawak Corner located opposite the mosque and in front of the Jolly Green car park selling roti jala and an interesting variant of roti jala. Here you can see them moving the batter cup to drip the batter on the griddle in circles to make the lacy pancakes. 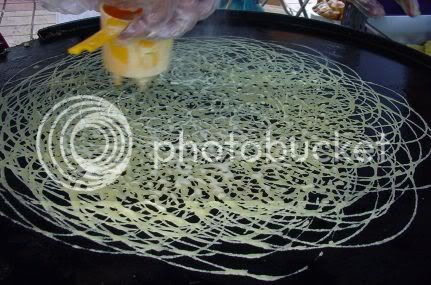 A new invention they had come up with was their murtabak roti jala. They had fried a flat chicken/beef patty earlier on and once the roti jala is ready, they add the patty inside the roti jala and fold it up just like a murtabak. I bought some for my dinner and tried it so it was so unusual. It is pretty good stuff but my only gripe was they added some peas and carrots inside it which I am not too keen on. 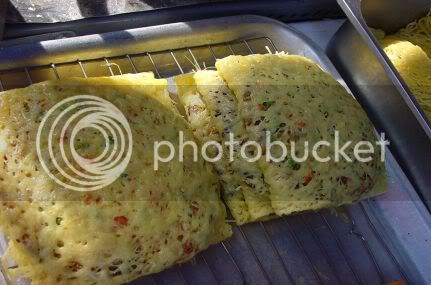 I know you have all seen this before but I could not resist taking pictures of these beautiful Kuih Bakar which has lots of sesame seeds sprinkled on top of it. This kuih is essentially a baked pandan cake topped with sesame seeds. It has a nice crunchy crust and is soft in the middle. The extract from the crushed pandan leaves gives it a distinct green colour. 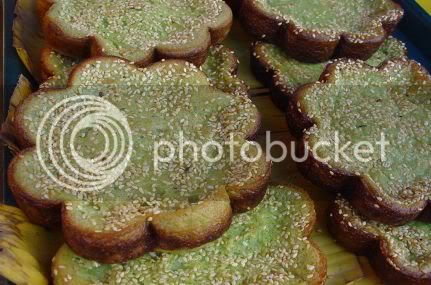 I love onde-onde, another popular Malay dessert which is made from a rice flour dough that is flavoured with pandan extract. Inside the little ball is a piece of gula melaka (Malay for palm sugar). The dough is shaped in little balls and tossed in freshly grated coconut. When you bite into one, be careful as the syrup inside may drip out. This stall had a lovely way of packing their onde-onde in these banana leaf cups that made them stand out among the many varieties of cakes. 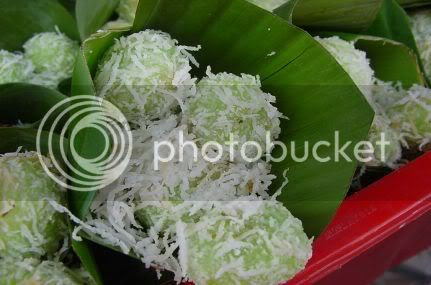 A few years ago I bought some ayam golek (Malay for roast chicken) at Bangsar which was fantastic with the flavours of pandan and lemongrass stuffed inside it. Sadly that stall never came back to Bangsar so I have not eaten that for a few years. This guy was making something similar, a honey roasted chicken on skewers which is totally different from the usual ayam perciks you get at these bazaars. The ayam percik is usually grilled directly over a grill and smeared with sauce. 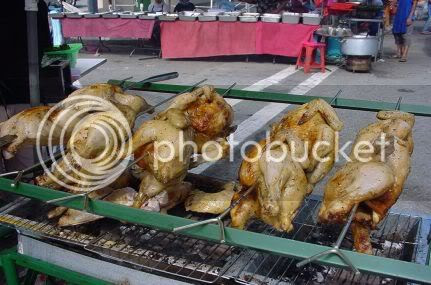 Another unusual item at this bazaar is the Nasi Pulut or Nasi kunyit which I had blogged earlier about. The glutinous rice is yellow from the addition of the spice, turmeric. 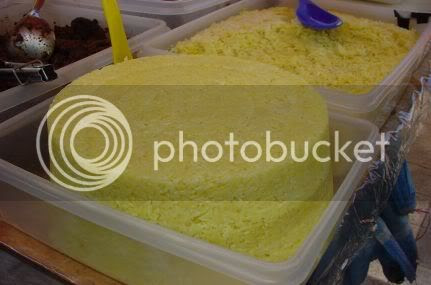 It is served with Rendang Tok that is either made from beef or chicken (the one below is the beef). This type of rendang is said to be special as it is made from lots of grated coconut called kerisik and is from the state of Perak. 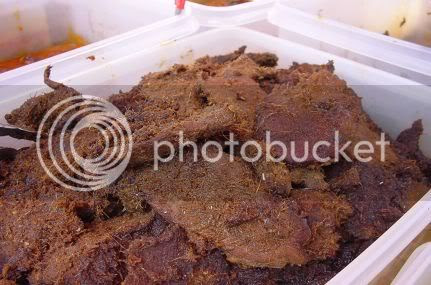 This is Mrs. ecr's favourite, the pulut udang/pulut panggang which is glutinous rice with a filling of sambal prawns that is wrapped with banana leaves and grilled over an open fire. 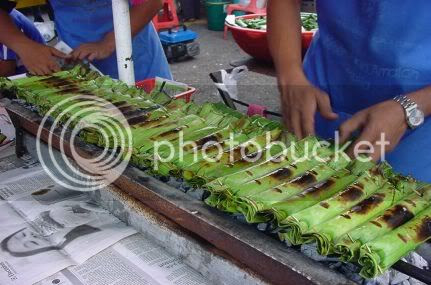 It took me a while to realise that this is Nasi Briyani but they had spelled it as Bariani. This stall is from Batu Pahat, a little town in Southern Johor which is famous for this dish. I peeked into the three big metal pots they had and I was bowled over by their lovely fluffy rice that is flavoured with spices. 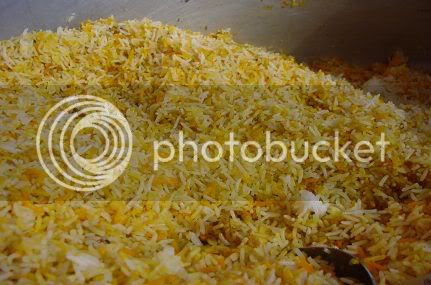 They had two types of curries to go with the rice, this chicken one and a lamb one. Okay, I know the picture does not look too appetising with that huge pool of oil but the curries looked good especially the lamb one. I bought one portion of it with the lamb curry and it was fantastic! The rice was fragrant and the lamb was so tender. Usually the ones we get are so tough as they use some unidentified parts of the lamb but this was fantastic as they gave me a piece of the lamb rack with the bone sticking out. 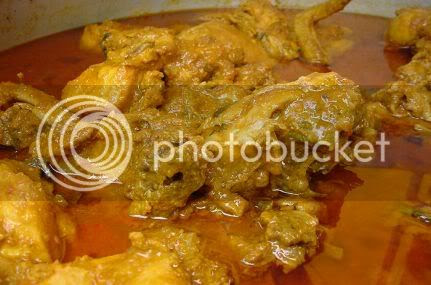 As this was Bangsar, there was of course some Indian Rojak being sold. Indian Rojak is essentially fried fritters like these ones called cucur udang (Malay for stuffed prawn fritters) that is cut up and tossed in a sweetish peanut sauce, some spicy sambal and bean sprouts. 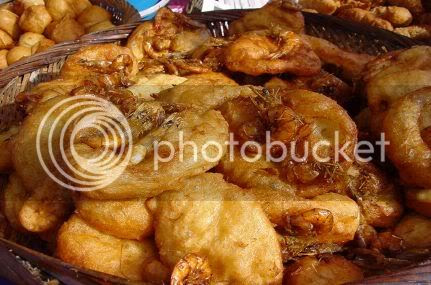 Besides these stalls, there was also leng chee kang, laksa Kedah, the ayam percik stalls with their traditional smoky grills, nasi ayam (Malay for chicken rice), honey grilled chicken wings, various kuih muih and drinks. The only thing I realised is they have yet to start selling their usual variety of cookies. I guess it is too early for cookies and if one goes to these bazaars later in the month, you will probably see jars and jars of them for sale.

Ramadan Bazaar
Bangsar, Kuala Lumpur
Located at the road leading to the mosque. The stalls are placed from the front of Bangsar Village to the mosque.
Starts around 4 p.m. until 7 p.m.
Posted by boo_licious at 4:40 AM

Wow, what a post! The Kuih Bakar looks incredible! I hope I am able to sample one oneday.

Gemma - Are you making Msia one of your stop overs? Hope you do so you can try them.

Onde-onde...nice...very nice indeed. Why are you doing this to me???Hahaha, great post.

These ramadan bazaars are fantastic! I'd love to taste ALL the foods you've featured. Thanks, Boo!

humblewarrior - thanks for dropping by and I hope you get to eat the onde-onde soon.

Paz - Overload of street food is what the blog is now suffering from.