I was getting a bit tired after my walkabout around the bustling street so I took a look at some of the teatime snacks they had to offer at the stalls. They seem to be selling three kinds of items namely two types of vadai and pakora.

Vadai is quite a popular Indian snack here and you get small stalls opening during the afternoon which just sell them. The South Indians eat them with sambar and coconut chutney. I like them plain and piping hot. This is paruppu vadai which is made from ungrinded dhals (lentils) and it is crunchy and hard. You can see the bits of spice and curry leaves peeking out from the vadai. 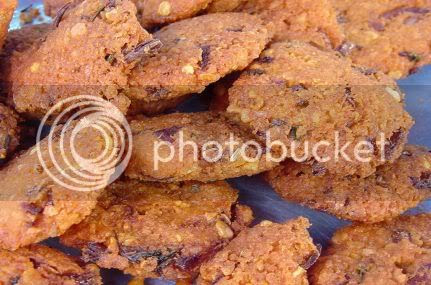 This type of vadai is extremely popular in Malaysia and you see them at almost all the Indian restaurants or stalls. It is made from grinded black gram dhal (lentil), flour, rice flour, onions, curry powder, shredded curry leaves and chopped green chillies. I prefer this type as it is softer. 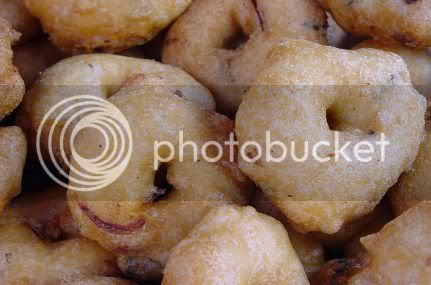 This stall was also frying up freshly made pakoras in large wok of oil. 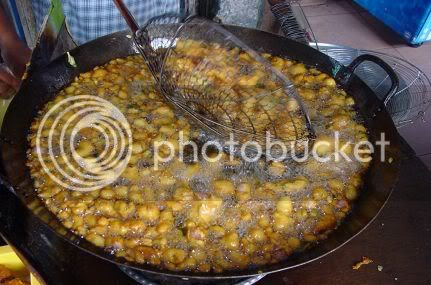 Here you have the pakoras all ready for the customers. Not too sure what is their fillings but I can see bits of green peeking out so they could be vegetables or curry leaves. I was tempted to get some as I have not tried them before but since I had bought vadai, I thought that was more than enough for a snack. 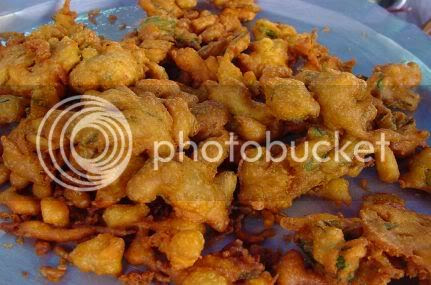 I was feeling a bit thirsty too so I stopped by for some cendul at this little stall in a side lane. (It is next to the huge muruku stall) The cendul was very refreshing and a great booster for me to carry on walking the main street for more sweets. 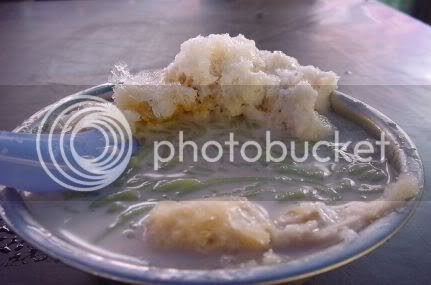 I finally got to the mithai (Indian for sweets) shop, Chennai Masaala which I had heard quite a bit about from reading the papers. The sweets are flown in weekly from Chennai and it slightly different from the ones you usually get at the Indian restaurants. The only bummer was the way their glass display cabinet was done, there was no way I could take pictures without the glass. This caused a slight reflection for my photos so some are not perfect.

These discs are called white pistachio peda. Peda is a sweet that is made from khoa which is milk that has been boiled until it seperates into a solid chunk and liquid. The solid part is used to make the sweet and slivers of pistachio(known as Pista in Indian) is placed on top of them as a decoration. 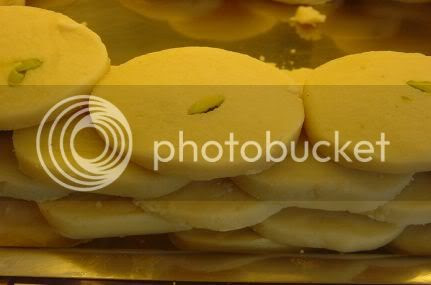 This stacked squares are Kaju Dry Fruit is made from ground nuts and is studded with niblets of cashew nuts and pieces of dry fruits. 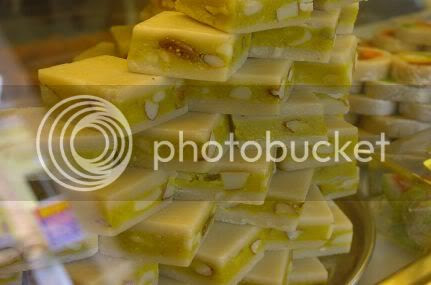 There are a few types of Kaju (Indian for cashewnut) sweets made from ground nuts and this one is called Kaju Melon as it looks like a watermelon with the red and green colours. Silver foil is added also as the outer layer which makes it quite festive. It is made from ground cashewnuts and almonds. 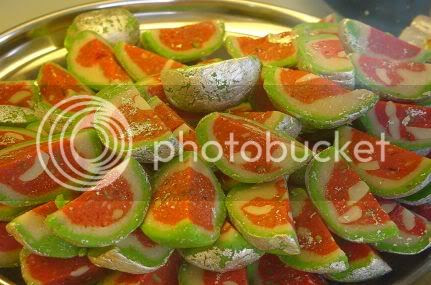 Another festive looking sweet, this is known as Badam (Indian for almond) Roll which is made from ground almonds. Silver foil is added to each roll as it is more of a celebratory sweet. 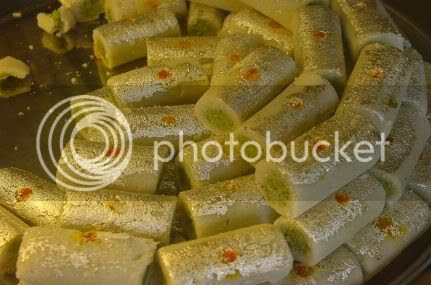 Don't they look like real life apples? This is known as Kaju Apple and is made from ground pistachios and cashew nuts. Their little stems are pistachio bits and they are painted yellow and orange to look like the real thing. 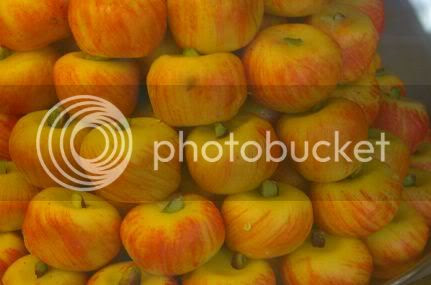 This is known as Kaju Flower as they have been cut to look like a flower from the top. It uses the same ingredients such as ground pistachios and cashewnuts as the Kaju Melon (which is a cut up version of the Kaju Flower). 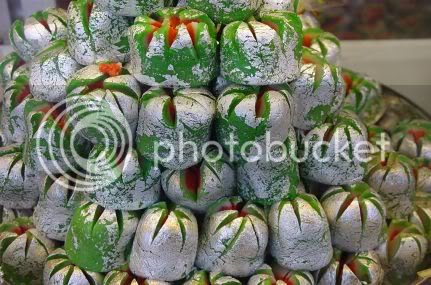 These colourful rounds are known as Kaju Four in One as four colours are added and consists of ground cashewnuts and almonds. 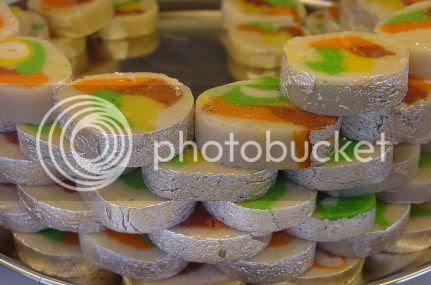 Then you have the many varieties of ladoos, this one is called Bombay Ladoo as it has saffron to give it a yellow tinge. 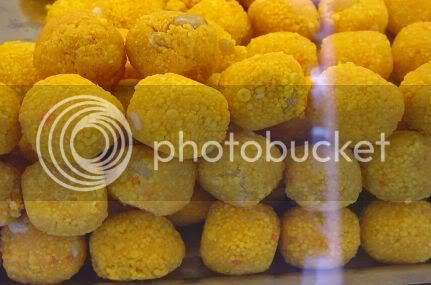 These look similar but they are known as Boondhi Ladoo which is made from sugee (semolina) flour. 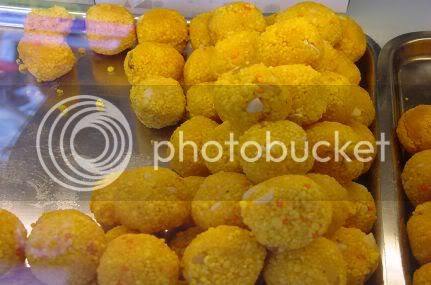 Then this is Spice Ladoo which is flavoured with spices like cloves. 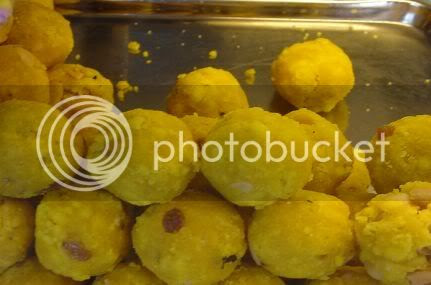 They also have a wide selection of halwas made from brown sugar and cashewnuts. 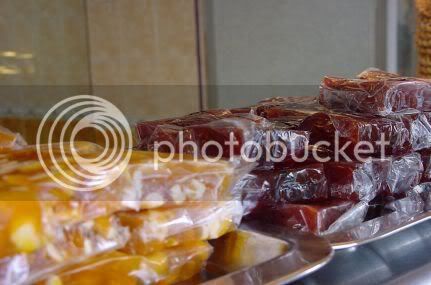 A very unusual way of flavouring barfi, the milk sweet, these ones are mango barfi. According to the shop owner, the milk is from a cow after it has given birth. 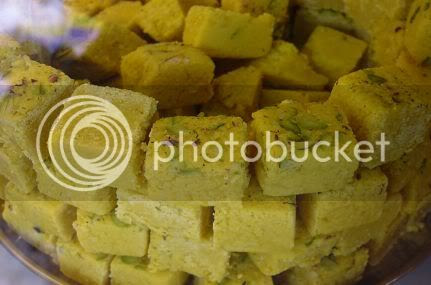 This is plain milk barfi which has flecks of pistachios decorating their tops. 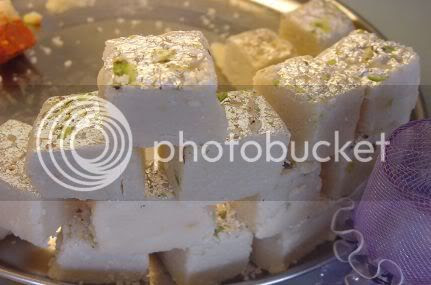 These ones are chocolate barfis with silver leaf decorating their tops. 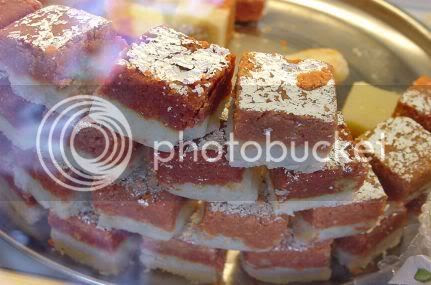 Something unusual, this is date mysore and you can see the bits of dates and nuts in them. 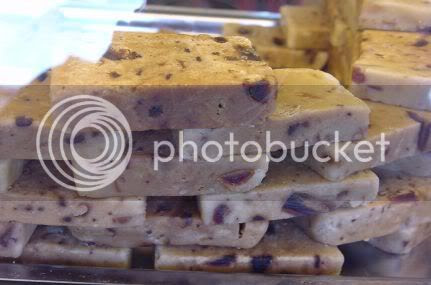 Another mysore but this one is plain ghee. 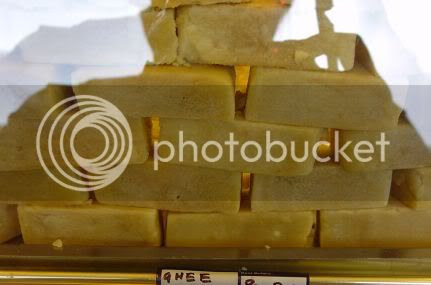 This is SPL Cow Peda which is made purely from cow milk. 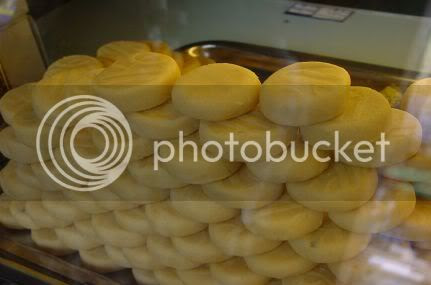 These tri-coloured squares are called Sangam Barfi which have three types of nuts; cashew nuts, almonds and pistachios. 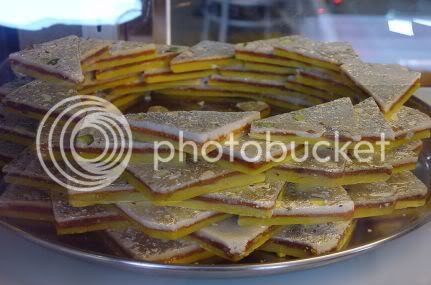 Hope you enjoyed my jaunt to Little India in Klang. Sorry about the short descriptions for the sweets but there does not seem to be much written about some of them in the Internet. I will probably do more posts on the other places celebrating Deepavali as there are lots more places like Brickfields (which I have been) and Masjid India that are booming with Deepavali shoppers.

Your making me homesick! Especially when I grew up in India! Oh the Ladoo. How I miss it!

oooohh...!!! and oops i forgot i'm boycotting your blog all of this month *kidding*

lightbulb moment - i think i should just get these yummy looking sweets to bring to the kampung for hari raya. do you know if they can keep long?

nick - wow! I am impressed, did not know you grew up in India. Never mind, Mongolia quite ok mah.

q - long time no see. No problems if boycotting, I understand as you are "puasa"ing.

The sweets can keep for quite a bit ( according to the lady - 3 mths in the fridge) but I suspect you can't eat them directly from the cold as it will hard so leave them out a bit to get to room temperature. Be warned, the some of the Chennai sweets can be pricier than the normal ones in yesterday's post as they are "imported". I reckon that is one the green and yellow apples in yesterday's post are cheap knock offs of the Chennai ones.

Great idea to buy them for Raya as the Indians believe exchanging mithai/sweets bring good luck.

Boo, such a great post! I've never seen so much Indian sweets before in my life. I really admire the ones called Kaju Apple. They really look like real apples. Wonderful!

Rabbit - They only seem to have this apple shaped one in Klang. Amazing stuff as it is nutty.

Ahhhhh!!!!! I kept screaming as I scrolled down to see all those Indian sweets. It's almost a torture that I can't be there to actually taste one of each kind.

obachan - when is your trip to KL?