I was not planning to go to this particular bazaar since I wanted to cover the bigger ones but I spied it when I was on the LRT back to Petaling Jaya and I could not resist. It has been pretty easy to track these bazaars as they have a distinctive plume of smoke emerging from them with all the ayam percik grills.
The bazaar is quite a simple but colourful one that caters for the residents within this area. After a quick tour of the stalls, I found this lilac yam/taro cakes which looked so pretty with the pink stripe. Usually the ones I see at the other bazaars are just two layers; a purple and white one but this stall added a pink layer which was so striking. 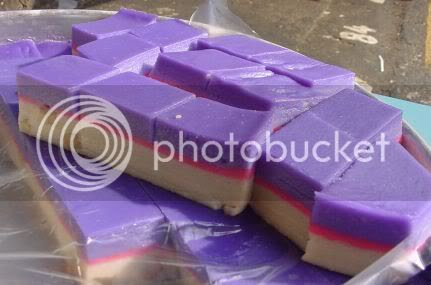 There was also a lovely golden yellow pumpkin version with niblets of pumpkin flesh scattered around the cake. 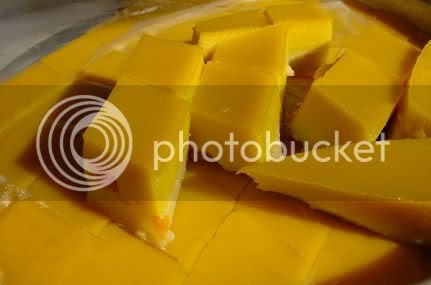 I had blogged about the kuih bakar earlier on but this was the first time I saw a savoury version. The lady called it kuih bakar berlauk and it looked like they had made savoury kuih cara but used a kuih bakar mould to bake it. 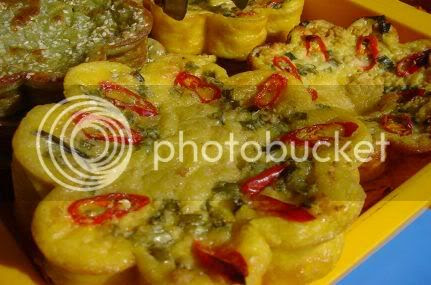 Most of these bazaars have a selection of cold drinks which you can buy by the packets or jugs. They come in all sorts of colours and flavours. These seem to be quite common in the bazaars; the pink air bandung (rose syrup with evaporated milk) that has bits of pink agar-agar inside and the brilliant green honey dew drink. 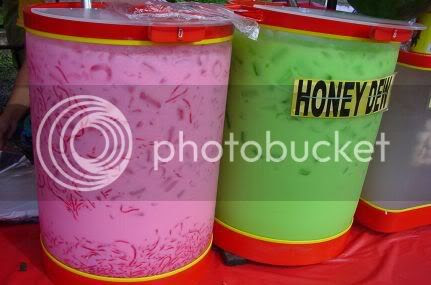 To save time when the crowd comes, the drinks stall will usually pack their items ahead. These multi-coloured packages caught my eye as they came in rainbow layers; black for the grass jelly, red for agar-agar bits, yellow sago balls, green cendol bits topped with the black and white selasih (Malay for basil) seeds. 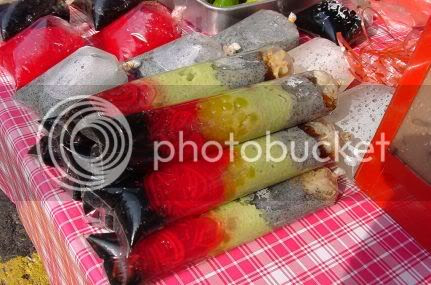 During the ramadan season, after fasting for the whole day, you need lots of liquids and some people survive on soupy diets. There will be stalls that sell soup in a big pot like this one and you can order them plain or with rice/noodles. 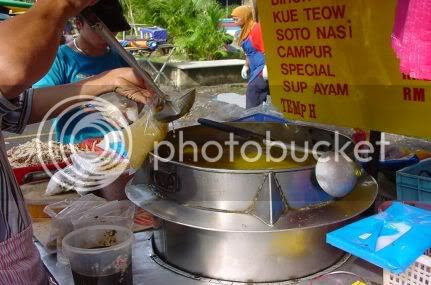 I have been discovering different versions on how they barbeque whole chickens (ayam golek). I liked this one which consisted of thick steel rods that rotated over a smoky grill to make perfectly golden brown chickens. 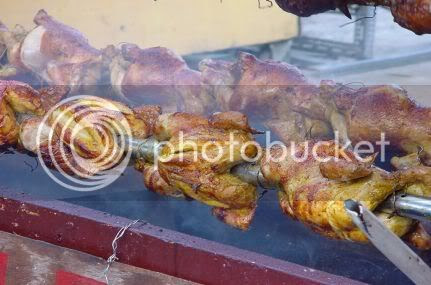 Another version of kuih cara, this one has corn bits inside them. 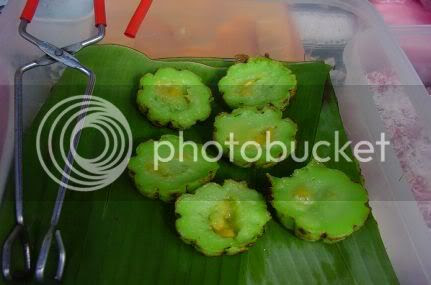 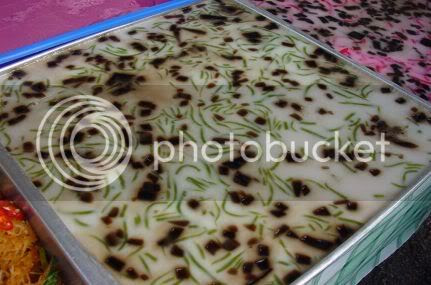 First time I have ever seen this, bread agar agar! Slices of bread are laid on the tray and agar-agar mixture is poured on top. I wonder what it tastes like? 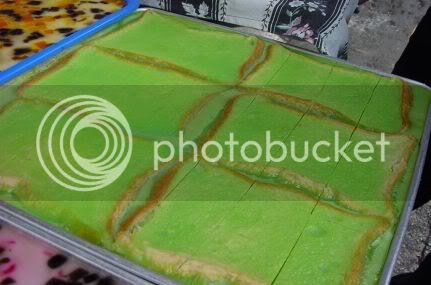 This stall also had their version of banana agar-agar which had pieces of bananas, green agar-agar bits in a coconut milk agar-agar base. 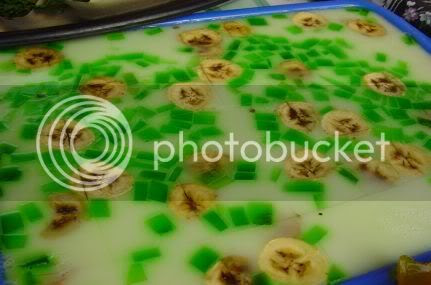 The second stall had various types of agar-agar which they had pre-cut. When I took these pictures, it was too sunny for me to notice what they had put inside them. I only noticed that the top of the agar-agar has Marie Biscuits in them when I looked at them on my pc. 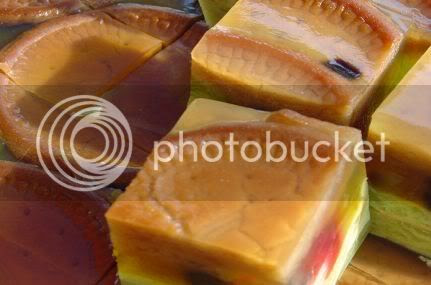 I love the multi-coloured layers of this agar-agar with their technicolour pink tops. Reminds me a bit of the colourful Bassets Dolly Mixtures. 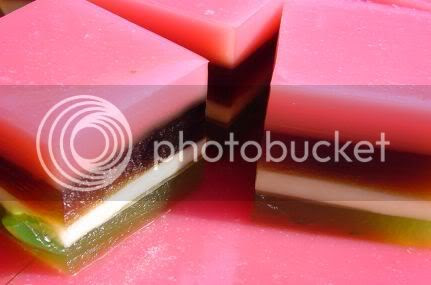 I am not too sure what they added in this particular one but it looks like a type of bread or sponge on top while the bottom layer is agar-agar with green and pink agar-agar bits. 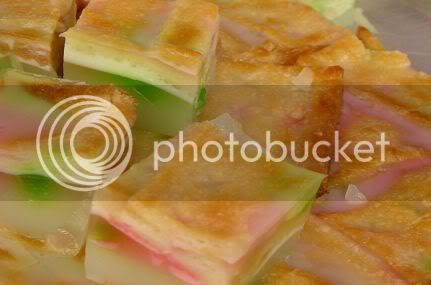 Ramadan Bazaar
Kampung Kerinchi
(Take the LRT to the Universiti stop and alight from there. Walk out of the station and cross the road. The stalls are in front of the low cost flats and behind the hawkers on the roadside)
Starts around 4 p.m to 7 p.m.
The local Star paper ran a series of articles on bazaars in Petaling Jaya in their Metro section. It looks like those were the journalists I saw at the bazaar in Section 17 last week. Links to the articles are below which will be "active" for a week before it is archived.

Oh! How I miss those Ramadan food stalls! My favourite is the Terubuk ikan bakar!

I think i will only come back to asia during Ramandan..! that way i can get to eat all these gorgeous food..! i love the way they packed the chendol..! so artistic like eh..??

shagen - never mind! You have NZ lamb to eat everyday.

mamabok - yes, I think visiting Msia during Ramadan month is a must esp if you love Malay food.

All this beautifully coloured food makes me hungry; I'd love to go through one of those yummy bazaars!
You are really lucky...

The look of the kuih-muihs is improving nowadays :). Got different design some more ;P.

Your photos are gorgeous--and your mini Malaysian food culture lessons are always fantastic! : )

I would love to see the type of pan that is used to make the kuih cakes (the ones that look like flowers). Is it a single mold or are there many mold impressions per pan?

rosa - malaysia is a place for festivals and eating!

emotionalistic - yes, lots of new designs. I think they have to keep up with the times.

farmgirl - I love promoting Malaysia and it is so easy since we have so many nice stuff.

anasalwa - hop on an LRT and get some. It is so near the station so it's easy.

evil jungle prince - I suspect the pan has a few mold impressions and it's one side. Some put the 2 sides together and some don't esp if they put in stuffings.

Boo, nice pics... you're really lucky to stay in KL! I'm hungry...
The agar-agar with Marie biscuits is interesting. Wonder how it taste like?

rabbit - hey you stay in Penang which has fantastic hawker food! No idea abt the taste but I guess it will be a bit like sponge cake since it should have soften a bit.