I know my blog has been suffering from a massive infusion of sugar with all those Indian sweets I covered the past few days. It is going to reach even higher as today is Sugar High Friday time so I am timing this entry as late as possible. This round is hosted by Lovescool and is all about dark chocolate. I love the Dark Side theme as it reminds me of Star Wars. (Incidentally I just met two kids who are so Star Wars crazy that they could remember all the scenes in the six episodes. Amazing stuff!)

This round I thought I will show you my two sides; the good and bad/dark side. As I was born in May, I am a true blue Gemini and depending on my mood, I can swing from being a practical and sensible gal to a crazy one who does things on a total impulse. Hence when it came to making my entry for this month's SHF, I was all sensible about things telling myself that it has to be simple as I have too many events stacked up near each other. After doing my "good side" dessert, I switched to Lovescool's write-up to double check something and read the last paragraph where she challenged us to think outside of the box to create an unusual dark chocolate dessert. Somehow those words clicked my "dark side" on which took over sensible old me. My impulsive nature said, "Hey, I can make another dessert" while ignoring the "good side" that kept saying, "Just get on with your IMBB souffle! as time is of the essence."

Here you have my "good side" dessert, an easy yummylicious but elegant Hot Chocolate Fondant. Recently I am massively into Gordon Ramsay ever since I found an old issue of Olive magazine that had a free DVD of him cooking up items from his book, Gordon Ramsay Makes It Easy. As we don't get any of his cooking shows or the reality television show, Hell's Kitchen, I have not seen him in action before and was impressed when I saw him at work in the DVD.

Although I have not gotten his book, I had some of the book's recipes when BBC Good Food did a feature on it. The fantastic thing about this recipe is it's simplicity and most importantly, it turned out perfect when I made it after one try. The only slight bit was I got my fondant at the wrong side when I took the pictures, the recipe did ask for it to be turned over so it shows the bottom bit. The top bit looks better as it is all smooth and nice which is what I should have used. Never mind, those are minor details as one bite into that fondant was heavenly and I could not care less what it looked like from whichever angle. Do try them as they are great little desserts for entertaining and I can imagine your guests going "WOW!" when they dig into it and get that sublime river of melted dark chocolate.

Heat oven to 160C/fan 140C/gas 3. Butter two large ramekins, about 10 cm in diameter, then dust liberally with cocoa powder. Slowly melt the chocolate and butter in a small bowl over a pan of hot water, then remove from the heat and stir until smooth. Leave to cool for 10 minutes.

Using an electric whisk, whisk the whole egg, egg yolk and sugar together until it is pale and thick and holds a trail, then fold in the chocolate mixture. Sift the flour over the mixture and gently fold in, using a large metal spoon. Divide between the ramekins and bake for 12 minutes until set with the slightest wobble in the middle. Turn the fondants out onto warmed plates and serve immediately. 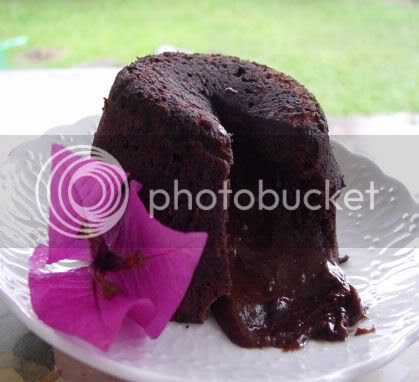 So what did I make for my "bad/dark side"? Before I made the fondant, I was toying with the idea of making some chocolate salted pretzels that Jill Dupleix had featured in one of my Delicious magazine issues. They sounded delish as I love pretzels and covering them with chocolate sounded so divine. My implusive nature said, pretzels sound quite boring, why don't I coat those Indian snacks called muruku instead? I so wanted to do that but when I decided to make them, there weren't any at the supermarket. Then I thought, hey how about some wasabi potato crisps coated with chocolate, that will be a real clash of flavours!

Sadly there was also none at the supermarket but I did find some unusual crackers shaped like edamame beans which I bought. They tasted pretty good before and after I coated them with chocolate. I also made some with Frito Lay's Ruffled Potato Crisps which turned out pretty great too. Kinda reminds me of the Royce Chocolate Coated Potato Chips which I had before but I did not coat the whole side and I used dark chocolate instead of milk chocolate. It's pretty simple to make them but the only problem would be preventing them from melting in our tropical heat. 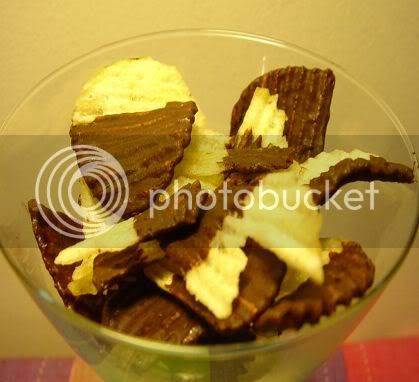 Set out two baking trays covered with baking paper. Dip each pretzel/crisp into the chocolate, tap against the side of the bowl to get rid of any excess and lay on the baking trays. You can use bamboo skewers to do this delicate operation. Leave for twenty minutes, the transfer the finished pretzels/crisps to a fresh baking paper, leaving the excess chocolate behind. Transfer first batch after twenty minutes and set aside for 3 hours for it to set, then store in airtight container for 2-3 days. Do not refrigerate. (In tropical countries like ours, you will need to put them in the fridge as they will not set otherwise) 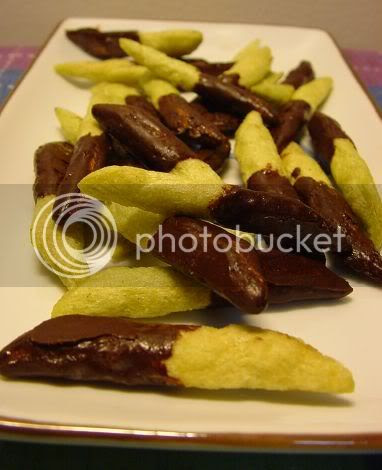 Three scrumptious chocolate indulgences! I particularly like the combination of salty and sweet you have chosen to highlight with two of them...delicious!

Thanks so much for joining in on SHF!

wow! the fondant looks so luxuriously good...lovely post, as always...

The good and the bad join the dark side! What doesn't get better once it's dipped in chocolate?

Boo,
Yummies! The fondant looks very very rich. Now, if I could only taste some of it. Frito Lay with chocolate sounds very chic... great recipes!

jennifer - salty and sweet went very well together that I am now thinking of other things to make. I think I am hooked on it.

J - The fondant was so yummy to eat, not too sweet as it was all pure bittersweet choc.

nic - hee hee, luckily I did not suffer loss of limbs like Anakin Skywalker when he succumbed to the dark side!

Rabbit - surprisingly it was not too rich and just nice portion. Could be because of the choc which was bittersweet.

Indira and Cin - yes the fondant was so tempting with that river flow of melted choc. Sublime stuff!

Oh the fondant cake looks devine. I can almost taste it! Chips and snacks with chocolate. My favorite is fritos! Fun entry, thanks!

chronicler - the fondant cake is yummy and not too sweet with all that bittersweet choc. I had fun with the fries, do try them with your fritolays.