The bazaar in Kampung Baru is divided into two parts whereby the second bit is along Jalan Raja Alang where the mosque, Masjid Jamek is located and it is just a short walk from the LRT station and Jalan Raja Muda Musa. If you walk further on, you will encounter the daily night market stalls which sells vegetables and fruits just before the road ends with Jalan Chow Kit.

At almost every ramadan bazaar, there will be at least one stall selling ayam percik or ayam madu panggang (honey barbeque chicken). They will usually cook them ahead and place them on platters for people to choose them. I liked these ones which they placed on top of banana leaves as the colours go so well together. Mrs. ecr has a wonderful post on the ayam percik in Bangsar's ramadan bazaar so hop over there for a read. 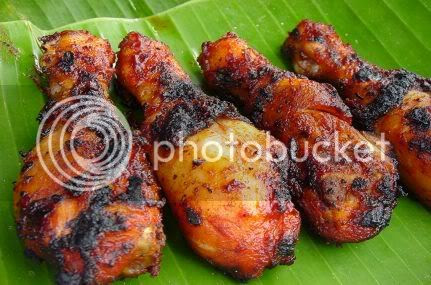 This stall was serving all kinds of bubur manis (Malay for sweet porridge) made from coconut milk, green beans, red beans and etc. Reminds me a bit of the tong sui we get in the Chinese dessert shops. 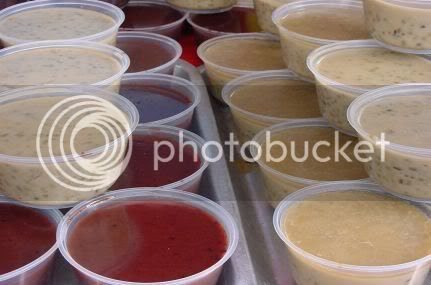 There was this stall selling beef rendang and chicken rendang in two huge woks. Besides the usual variety, they were also selling a Perak specialty called rendang hitam where the colour is more black rather than brown. 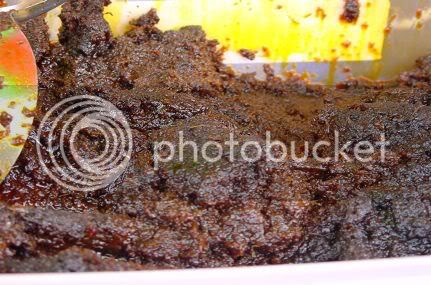 At these bazaars, they usually sell different varieties of drinks but this one was really unusual, a blue colour drink mixed with calamansi limes (Limau Kasturi in Malay). 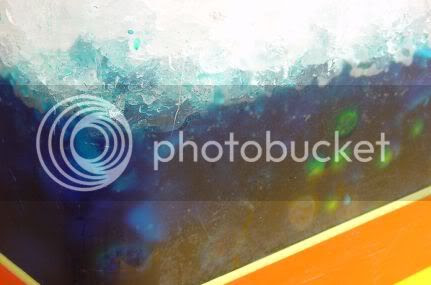 This is dadih which is akin to local yoghurt that has comes in different flavours like chocolate, strawberry, corn, honeydew and etc. It is made from fresh milk that is fermented and is said to be good for your health as it contains probiotic enyzmes. 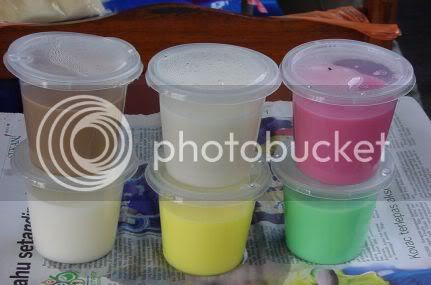 One stall was selling salak, a fruit which is popular in Indonesia. I have eaten them before during a trip to Lake Toba, Medan but it was so long ago, I can't remember it's taste. It's not a common fruit in Malaysian markets but seems to be popular at Kampung Baru as there are a lot of Indonesians around the area. 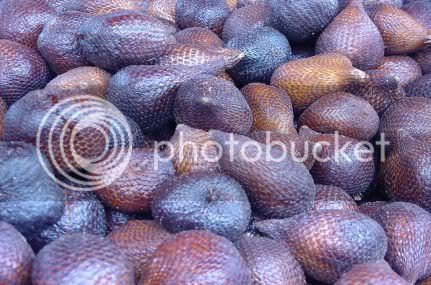 The stall also had these avocados which looked so different from the ones we usually see at the supermarkets. Not sure if they taste the same as they look so hard compared to the imported ones. 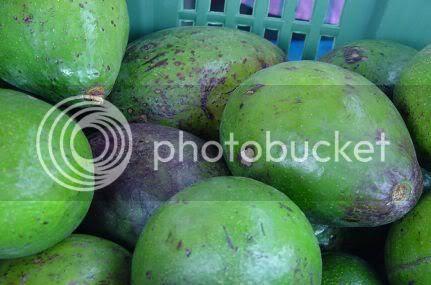 Almost at the end of the stalls, just before the vegetables and fruit stalls start, there was this wonderful stall selling Putu Bambu. It is something I have heard of but never seen until that day. I have been searching the bazaars for Putu Piring which I love and so far seen them at the Bangsar and TTDI bazaars. The Putu Bambu is similar to Putu Piring, but packed in bamboo casings instead. The casings has ground rice flour packed into it with a filling of gula melaka (Malay for palm sugar). The putu is then steamed until it is ready to eat. 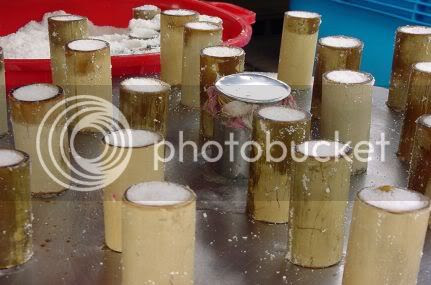 This is what it looks like when it is removed from the bamboo tubes. It will be packed on top of a banana leaf and sprinkled with freshly grated coconut. I bought some but sadly I gave them to Splashie Boy so I did not get to taste any. He said it was very nice so I am now hankering for some after viewing these pictures again. I guess I must make another trip to Kampung Baru to get these. 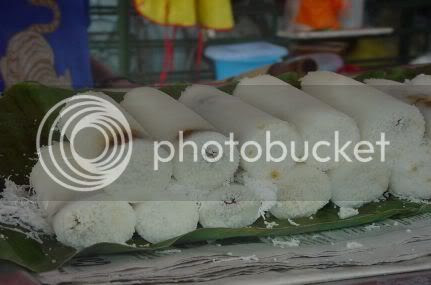 When I saw these Taukua Sumbat, I thought about Glutton Rabbit who had recently talked about them at her blog. The tofu is slit in the middle and stuffed with sliced cucumbers. You eat them with a spicy peanut sauce. 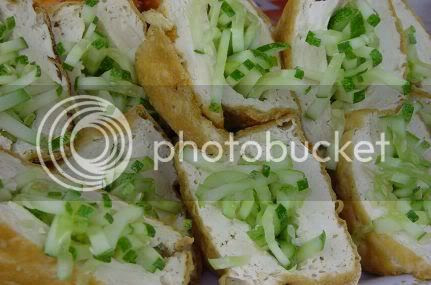 There was this stall that sold all kinds of kuih which I have not seen before like this Kuih Tepong Sagu that is made from sago flour and has freshly grated coconut in it. 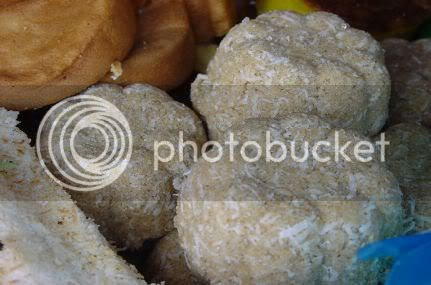 These chicken wings are also quite popular and coated in the honey sauce and grilled on the open fire. I love the way they keep them in those skewers before they grill them. 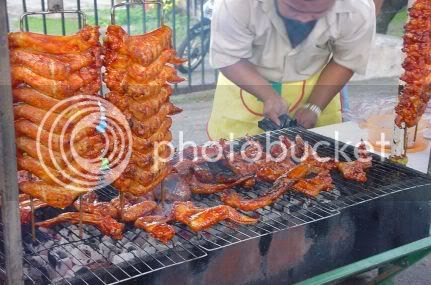 I found two versions of tepung pelita along the road, one which had been packed in plastic containers while the other one had the more traditional banana leaf containers. With the plastic ones, you can see clearly the second layer which is pandan flavoured.

On the way back to the LRT station, I walked towards Masjid Jamek, Kampung Baru's local mosque. See those cute ketupat lights strung on top. Those are the Hari Raya street decorations that are placed in major tourist areas celebrating the festival. If you walk further, there are stalls around the mosque area selling clothes for the Hari Raya celebrations. 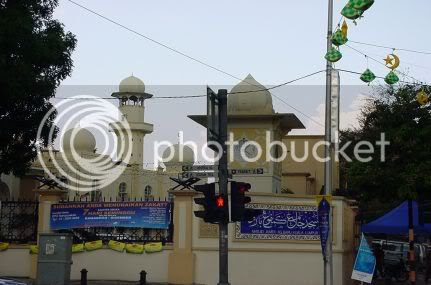 I did mention that Kampung Baru is smack in the city centre, here you can see the view of the KLCC twin towers from Jalan Raja Muda Musa. The flats is where the LRT station is. 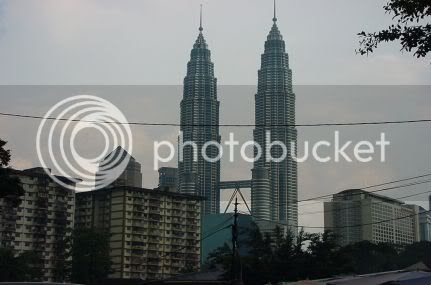 Along Jalan Raja Muda Musa, I spied a typical Malay house made from wood and concrete stilts. It's slightly modernised with it's concrete stilts as the ones you get at rural areas are usually made from wooden stilts. Traditionally the houses are built on stilts to protect it's residents from any wild animals coming in to attack them. It also helps cool the house interior as most houses in the rural areas cannot afford air-conditioners. 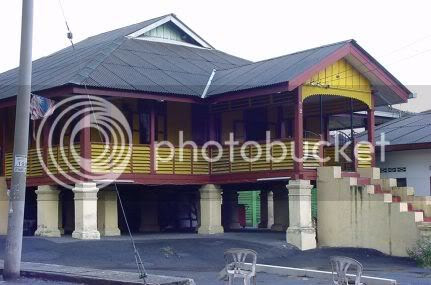 Ramadan Bazaar Kampung Baru
Jalan Raja Alang
(at the end of Jalan Raja Muda Musa, turn right and walk along Jalan Raja Abdullah. You will come to a traffic light, turn left and cross the lights. The road ahead of you will be Jalan Raja Alang which leads to the Chow Kit area.)
Starts from 4 p.m. to 7 p.m.

your blog is cruel and unusual punishment for those of us away from malaysia.
hungry....

I've been trying to stay away because I was getting so hungry (and jealous that I was not in M'sia) every time I stopped in. Well, I stopped in today, and I have to slap myself for all the torture.

The food looks to die for! =P

vagus - sorry! Never mind, it reminds me that it is time to visit home soon.

reid - sorry also for the torture. My pixs should be ending soon by early next week as I am running of places to visit.

Boo, is it possible for you to prescribe me a stronger "dosage" for fighting food cravings?

humblewarrior - sorry about that but don't worry, the torture will be ending soon.

waaah.... u really so rajin go to all the different places... very good la

You like inflicting pain on other people, don't you? The photos are sooooo good...

mahaguruasia - sarawak got any? Will be great to see some there.

lin - I am not "rajin" just greedy for pixs!

collin - I am sadistic, but seriously, these bazaars make great pix material.