Another famous bazaar among the Petaling Jaya and Kuala Lumpur people is this one located at a suburb called Taman Tun Dr. Ismail which is fondly known as TTDI. This bazaar was packed with people and cars already at 4.30 p.m. when I went. Everyone was rushing around buying their items and queues were already starting at the popular stalls.
I saw a few stalls selling this Apam Tepung Beras, which is a steamed cake made from rice flour. It is quite similar to the chinese Huat Kuih/Fatt Koh which is also a steamed rice flour cake except they add Eno, a kind of fruit salt. The malay one has a few versions, one made just from plain rice flour or with the addition of tapai, which is fermented rice. 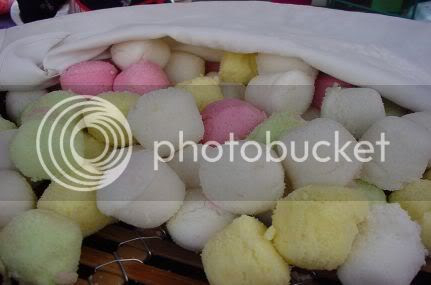 More chinese influences were evident as I saw these paus being sold in a bamboo steamer at one of the stalls. 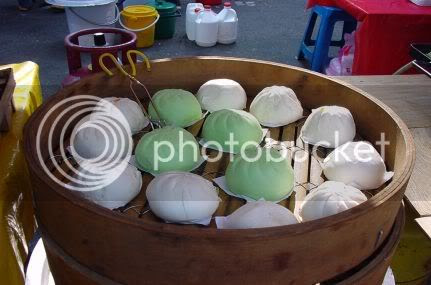 I am not too sure what this is called but it is a dessert with the rice flour balls mixed in coconut milk and freshly grated coconut. It was extremely sunny hence the shadows were in the way of some of my picture taking. 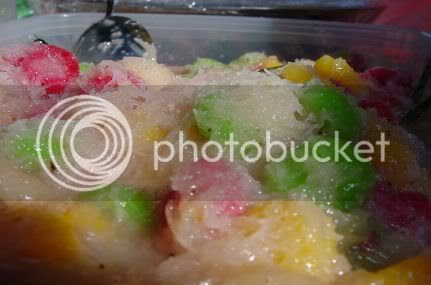 This is the earlier mentioned tapai that is made from fermenting glutinous rice and is packed in these banana leaves. This sweet sticky glutinous rice has an faint aroma that is similar to rice wine. It is a popular dessert and I have eaten a tapai dessert with vanilla ice cream and strawberry sauce at a Malay wedding dinner which was wonderful. You can also make tapai by fermenting tapioca or cassava and in some states, you can even get tapai flavoured ice cream. 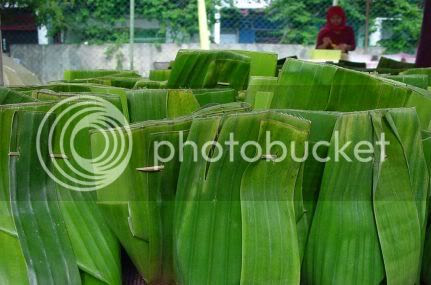 Something you don't see in the other ramadan bazaars, this stall was selling deep fried oyster mushrooms in a cup. 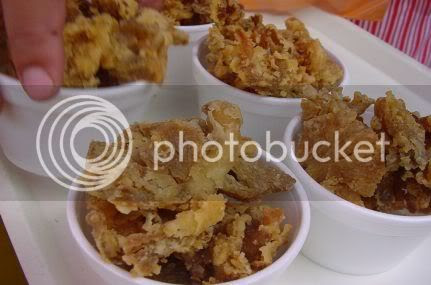 Another popular item in all of these bazaars is the kebab stall. Here you have two varieties of shawarma ready to be placed in pitas or hot dog buns. Usually they drizzle some chilli sauce on top of it also. 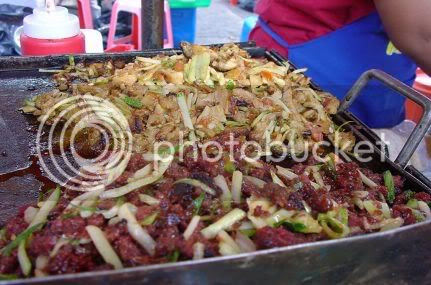 This stall at the other end of the entrance to the bazaar was doing brisk business and a queue was already forming patiently waiting for their chosen fish to be grilled. The white coloured fish in front is a whole sting ray. Sorry I couldn't zoom in as there was so many people crowding around the stall, it was difficult to jostle for a good picture. 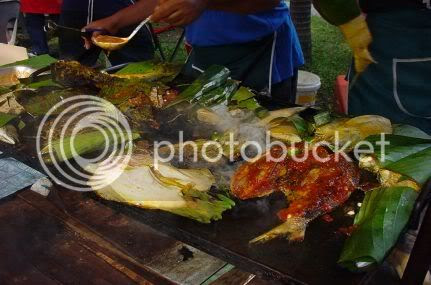 Something unique to the TTDI bazaar are these stalls selling roti canai and this Roti Boom, which is one of my favourites. The roti boom is thicker than a normal roti canai and has a very crisp top and bottom. Excellent with curries, this was also another popular stall with a long queue. 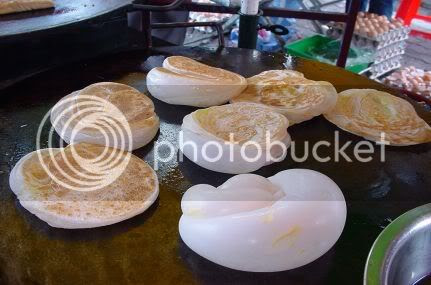 I know I showed you some satay from a previous bazaar but do check out this guy who was preparing his satay and grilling them. He is using the fan to get the fire going. 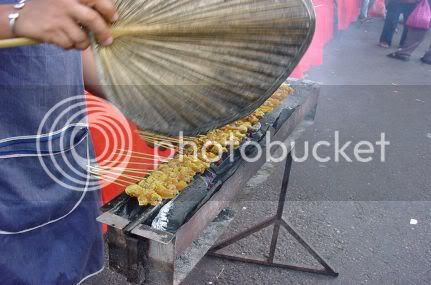 Something not featured earlier on and found in this bazaar are deep fried samosas. These are chicken flavoured while they were also selling the beef ones. 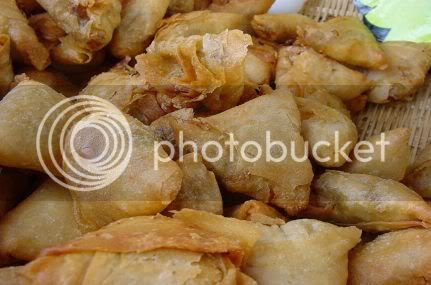 The bazaar also had an ayam golek (Malay for barbeque chicken) stall which had this interesting contraption to barbeque the whole chickens in the open air. I didn't get any this time round as I prefer the traditional way with the bamboo sticks. 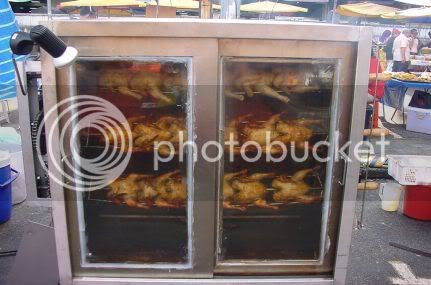 Remember I mentioned the nasi kerabu and nasi dagang we had at Songkhla Hawker, this is what they look like. The blue coloured rice is nasi kerabu while the brown one is nasi dagang. For the nasi kerabu, they will add herbs, raw bean sprouts and dried fish flakes on top of it to give the rice flavour.

The nasi dagang is eaten with this curry made from Ikan Tongkol or tuna. Have a look at Teepee's site as she has a lovely nasi dagang all plated with the curry and pickled vegetables. 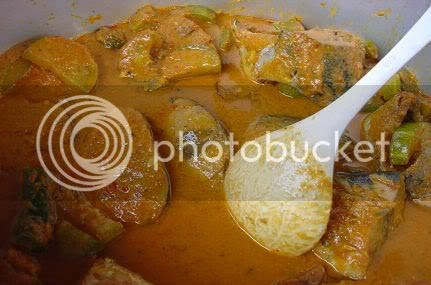 Do also check out Glutton Rabbit's pictures of a bazaar in Penang. She has some pictures of lemang including one made from black glutinous rice which I have never seen before.

Ramadan Bazaar
Taman Tun Dr. Ismail
Kuala Lumpur
(at the car park next to the TTDI market)
Starts from 4 p.m. till 7 p.m.
Posted by boo_licious at 9:00 AM

i was there yesterday and got so hungry with the smell of grilled food! great pics you have there!

came across ur site while browsing the net one day.

for ur information, i'm a blogger myself too and has started my site recently. i used to utilise blogdrive as my host but switched to blogspot now.

if u can see, my site is very much on political and current issues, so if ur interested, y not drop by my site some time n find out, i bet it won't bore u.

since i'm new on the bloggin scene i thought it would be good to get 2 know more ppl n get the mssg across. u can also recommend ur frends to my blogsite.

u r welcome 2 drop by and post some good comments in my site.

btw, great pics u have in ur site. definitely get my appetite going in these ramadan month.

Wow!! how many Ramadan Bazaar have u visited and going to visit? You can be an expert and maybe publish a book on it one day!! hehe. Yeah u're so famous now one of my friend has quoted u in her blog http://melanzanelane.blogspot.com, she heard it not from me but from another friend http://tehtarik.kurangmanis.net who most likely got it from my blog! :) (have u been visiting my blog lately ah? no comments one?)

eternity - you were? I wonder if we bumped into each other at the bazaar, there was so many people.

kelvin - welcome to the world of blogging and hope you enjoy yourself.

jess - I kinda plan to visit the major ones and hope to finish all of them this week. Easier to take other people's food rather than cook as I am lazy!

Boo_licious,
so much cun food! let's makan together one day!

Wow Boo
You have done an especially fab job on the posts of late! I have just caught up and am drooling over the food! Which is a good thing as I haven't really felt like eating.. I will come back tomorrow to get my appetite up for breakfast :)

Good grief, I actually put on 2 lbs since I first visited your blog a few days ago. Keep posting, boo. I am telling you, I'm inches away from licking my computer screen...

mob 1900 - thanks for dropping by. Great food review on Eric's place.

Clare - hope you get well soon and the moving headaches get sorted out. Glad that the pixs piqued your appetite.

wingz - we do exchange, food for 1 set of the problogger keyboard?

humblewarrior - if we all had screens that gave off the food smells, there will be serious problems. Do enjoy it, once a year experience.

hi boo_licious... got ur link somewhere while blog hopping...

omg.. nice pics and ur making my stomach grumbling at 10 am!

"I am not too sure what this is called but it is a dessert with the rice flour balls mixed in coconut milk and freshly grated coconut. It was extremely sunny hence the shadows were in the way of some of my picture taking"