This month's IMBB hosted by Kitchen Chick (such a cute little taro chickie dim sum she has as a header!) was a real challenge for me as I went through the downs and ups of making souffles throughout my weekend. It was also one of my busiest weekends in terms of food events as it felt like a non-stop marathon of baking and cooking. Luckily I was all for it since I have not been in my kitchen for quite some time.

When I started planning my menu, I decided that I will use different containers to bake my souffle in. My original plan was just a sweet and savoury souffle each for the event but somehow I ended up making four souffles this weekend! Here goes my very long story on my "souffley weekend" which does have a happy ending at the end of it:

My weekend kicked off on a slow start as I was still a bit doozy from preparing for Sugar High Friday plus we had a nice buka puasa dinner on Friday night. (No pictures of food as we were late and all the food was almost gone by the time we queued!) Hence it was only after lunch before I started making my Apple Souffles which I got from a cookbook called Dangerous Desserts. Caramelising the apples and cooking their sauce was very relaxing. Then came the tough part, trying to carve my Red Delicious apple to fit my souffle. It was especially hard as I panicked a bit when I saw the insides turning a bit brown so I kept brushing it with lemon juice in between my carving efforts. Cooking the apple to a pureed state took a while so I had to blend them. The souffle mixture was easy to make and I filled up my apples and some glass ramekins I had. Not too sure why but the souffles in my ramekins puffed up while the apple ones didn't puff up as much as I liked. I reckon it could because the sides are not straight enough or I had not filled up apple cups until the brim to make it overflow on top. Never mind, it tasted great with the caramelised apples which I had added lots and lots of lemon zest. I won't share the recipes here (except the last souffle) as it will be an extremely long post if I do but if you wish for copies, email me. 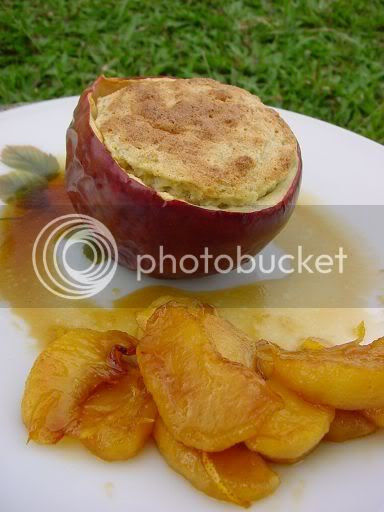 I wasn't too satisfied with my apple souffles as I wanted a puffed up top but I decided not to worry about it too much as I had to cook for my Blog Party which took the whole night to cook, take pictures and write up. The writing took so much of my time as I had some technical problems posting that by the time I finished, I was yawning my head off. The next morning after a great night's rest, I made my savoury souffle. I wanted something small and simple so I chose to make a Stilton Souffle Stuffed Mushroom. The recipe is from the BBC's Food website and was featured in Ready Steady Cook by Ross Burden. There was another similar recipe by Paul Rankin but I decided on this one since it used chef's rings and had no cream in it. As it was an Internet recipe, I also had no picture to guide me on what the end result looked like.

The souffle was a small puff on top of the portobello mushroom but I had a bit of liquid pouring out from the bottom which I suspect should not happen. However, it tasted great and made a light brekkie for me before I went out for the day. Before I went out, I did some surfing and thumbing through the other entries, I was a bit forlorn as I so wanted a souffle with a lovely high top. 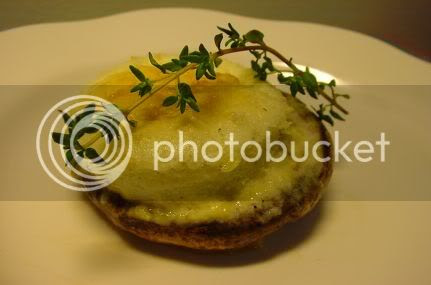 I decided to make another souffle as I so wanted a puffy top one so I chose this recipe that said, fail proof chocolate souffles from my BBC Good Food magazine. Can you believe I failed in making them? Maybe it was a combination of factors but I suspect I did not beat my egg whites enough before I folded them in. Nevertheless they tasted great although not souffle like and photographed like a dream as I took them on a sunny Sunday afternoon. They were also incredibly decadent with a scoop of coffee ice cream and bittersweet chocolate sauce that they would have been perfect for SHF instead. 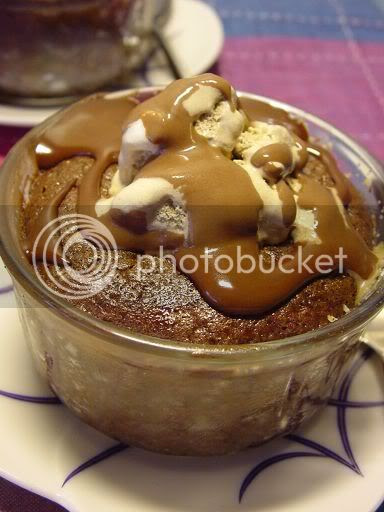 I moped around, counted the hours before my deadline for IMBB and thought I will give it one more try after dinner. After a yummy dinner of spicy Chinese food with friends, I was inspired to get it right. Maybe it was all those chillies I consumed which is supposed to boost my Vitamin C but I struck success with my souffle. It rose beautifully that I almost wanted to weep with joy! Not only that, it was beautifully straight and not crooked. Only bummer was my picture quality was a bit compromised since it was almost midnite when I took it. Never mind as I am happy that I can make souffle and I found a fool proof recipe. I ate my oh so light souffles with gusto and wow, they were fantastic. It was sweetish from the icing sugar I sprinkled on top with a slight tang from my cream cheese and so fluffy that it melted in my mouth leaving such an airy feeling. 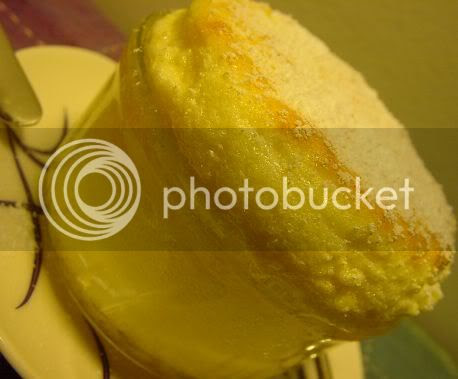 The great thing about this recipe I found in my Olive magazine that came from Paul Merrett and the BBC television show, Ever Wondered About Food? is they explain to you the science behind the methods.

To make the base, mix the flour and butter together to form a paste - this is cold raw roux called a beurre manie. Warm the milk and cream cheese in a saucepan until the cheese is melted. Add the paste (beurre manie) and whish it in, the heat will activate the starch and cook any floury taste. Cook for about three minutes, as this a fat heavy mixture, it will stick to the pan easily so keep stirring to stop it. Whisk the egg yolks with 1 tablespoon of caster sugar and add to the cheese mixture, stirring for 2 minutes to cook the eggs. Remove from heat.

To prepare the ramekins, first butter them thickly and evenly and then chill until the butter has set. Butter them again to make sure they are well covered. Then tip some sugar into one and tilt the ramekin untul the entire surface is dusted with sugar. Tip the excess sugar into the next ramekin and so on until all four ramekins are dusted with sugar. Don't chill them at this stage or the sugar will weep.

Heat the oven to 180C. Whisk all the egg whites to almost stiff peaks, whisking in the remaining caster sugar towards the end. Mix a dollop of egg white into the souffle base taking care not to knock too much air out of the whites. Carefully fold in the rest of the souffle mixture. Spoon into the ramekins filling them right to the top. Be careful not to scratch the buttered and sugared surface or drip any mixture down the sides; if you creat any "drag" at this point, your souffle will be lopsided. Bake for 10-12 minutes until risen and pale gold. Dust with icing sugar and serve as is or with some fruit and whipped cream.

You can open the oven door to check on it but close it carefully as if closed too quickly the cold air is pushed in and will affect your souffles. The souffle base forms the structure and flavour while the folded in egg whites makes it rise. The heat makes the air bubbles in the egg white expand while the protein in the base sets, trapping the enlarged air bubbles.

You need a straight side for the souffle to rise and buttering and sugaring it gives it a rough texture so the souffle has something to grip on when it climbs the side of the ramekin. The souffle base is easier to work with if warmer so if it is fridged, bring it back to room temperature before you mix in the egg whites.

Hope you enjoyed my souffle stories and thanks so much to Kitchen Chick for choosing the theme.

Those are four breat looking souffles, but the fourth one is really special! Beautiful! Excellent job!

that is sheer dedication to the task at hand, not one but four souffles.. and they all look good, I especially like the souffle in apple container (really unusual).

brett - thanks for the lovely comments. I love the fish head logo you have on your site and that pudding souffle. I am also into pomegranates too!

cath - I was quite free last weekend or else I would not have made so many! The good thing abt making souffles is they don't take long though. Thanks for the nice comments.

Boo, Yeahhhh!! At last a puffy souffle to end your post! Happy ending! I'm so happy for you...

Actually all your souffle looks nice and delicious. The apple one looks unique. I love the way you capture the photo with the grassy background.. testeful.

Chocolate one looks so gooood! I wish I can dip my spoon into the screen and try it! Great job!

Rabbit - I wanted a fluffy top so much!!! Luckily I had time to myself last weekend or else my bf will be like, why don't spend time with me but cook and bake?

Oh, my! Sorry I'm late with my comments. ALL your souffles look GREAT! So impressive! I can't even do ONE!

paz - do give it a try! They are yummy, light and airy.