Sorry for the very late posting today, I woke up a bit too late to finish this in the morning so I had to get it all wrapped up this evening.

Recently we were invited to Apek and Mas' wedding so I thought I'll give you a peek into what happens in a typical Malay wedding. Apek is one of Splashie Boy's Lanun Darat 4WD friends. Usually in Malay weddings, they will hold two receptions; one at the bride's house and another one at the groom's side. As this was the bride's turn to have the reception, a whole group of us went to support him.

Long tables were set up under white tents at the side lane near the surau for the wedding guests to sit and eat. The tents were decorated with magenta colours, which was the chosen theme for the wedding. See that little red pot, it contains water so you can wash your hands before you eat your food. The base is used to catch the excess water. No cutlery is given and one must eat with their right hand.

They served three varieties of rice at the wedding; plain white rice, nasi minyak (Malay for scented rice) and nasi briyani (Malay for rice with spices). Traditionally nasi minyak is always served at Malay weddings. The rice is cooked with butter, ginger, coconut milk and spices. The nasi briyani has saffron and spices that makes it slightly yellowish and full of flavour.

The food was served buffet style so everyone can help themselves to what they want. They had this special Daging Kerbau Gulai Ah Tok, which is buffalo meat cooked in this Kelantanese style curry. 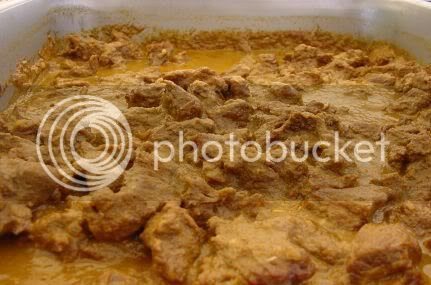 This is beef rendang, a must have in Malay weddings which was yummy. I always pick out the gravy to eat with my rice rather than the beef cubes. According to the caterer, this rendang was cooked using the Minangkabau style. Not sure what's the difference from the normal ones but it was a lot more creamier than the usual rendangs we get at the Malay stalls. 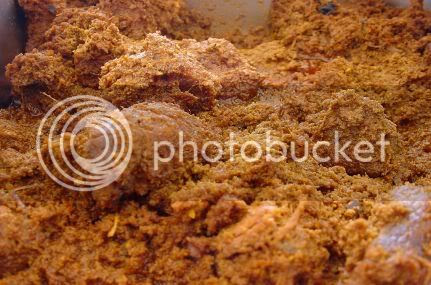 This is some cooked pumpkin which was not too great as there was not much flavour to it. 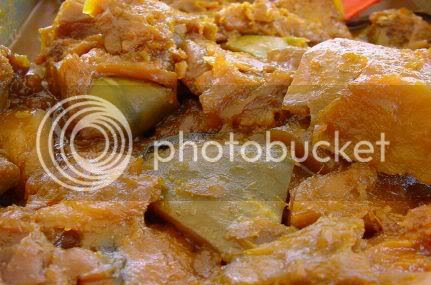 One of my favourites, Pajeri Nenas which is pineapple cooked in a thick and sweet kerisik flavoured sauce. Kerisik refers to toasted grated coconut that is used in most Malay dishes. 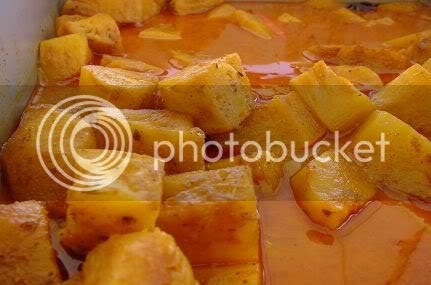 This is the Ayam Masak Merah, another typical Malay dish where the chicken is cooked in a spicy red tomato sauce. Another must have in weddings. 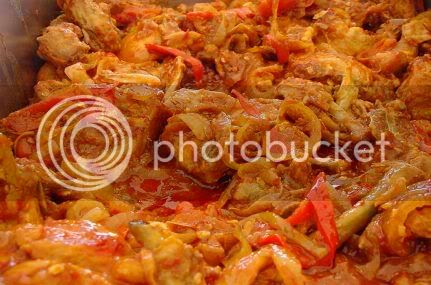 These were the condiments they served, the achar which are pickled vegetables and the yummy sambal belachan which was nice and spicy.

They also served some mixed vegetables that consists of sliced cucumbers, pineapples and onions tossed in vinegar. 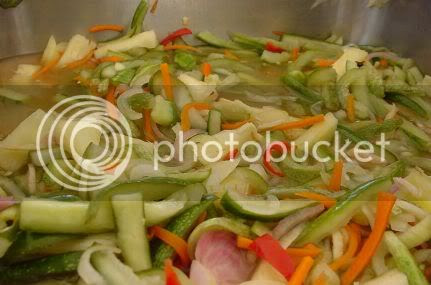 After the akad nikah ceremony at the surau, it was time for a walking procession to the bride's house. It was just a few minutes walk but the groom who is also known as "raja sehari" (Malay for the king for the day) was escorted to the house under a yellow umbrella and bearers of bungga manggar (the decorative flowers at the side). Sounds of the kompang (drums being beaten) heralded the arrival of the groom. The bride greets him with a kiss on his hand and they are led away to the bersanding ceremony. See the little kids gathered around the bottom of the bersanding dais, they were all patiently waiting for the ceremony to start.

Then it is time for the bersanding ceremony, where the groom and bride will sit on the pelamin (Malay for dais) that is specially prepared and decorated. They are attended by two friends who will fan them while the sit in state looking like a king and queen for the day. See those nicely decorated flowers at the bottom of their feet. Those are the bunga telur (Malay for flower egg), which is traditionally given out to those who bless the happy couple. 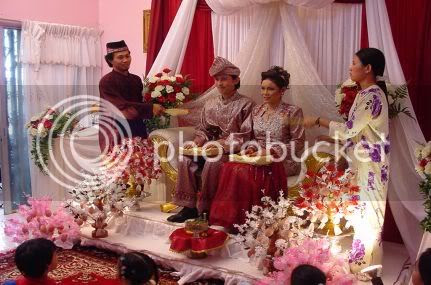 Guests will bless the happy couple with a sprinkling of petals and scented water. Here's the chief Lanun (Malay for pirate), Nassa blessing the couple. 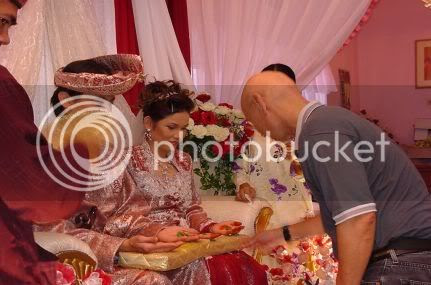 There were different types of wedding favours available for everyone that ranged from soaps, sweets for the kids, little teacup eggs and the bunga telur. Traditionally the egg is always given to the wedding guests as it symbolises a fertile union and lots of children for the married couple.

hey, you do know your malay wedding stuff, much more than i do. excellent description of everything ;-)

How not to get fat like that...just by reading alone already I can feel my stomach filling up ;)

q - I am hopeless about Malay weddings as I rarely go, some stuff I got off from the Net.

kokonutsoldier - who told you not to come with us that day? By the way, Splashie Boy said this wedding's food was one of the best he has eaten as the food was very tasty.

What a wonderful-sounding celebration. I want to attend a Malay wedding, now.

Hi Boo,
What a wonderful post. Fascinating. I loved reading about everything--and that picture of the King & Queen for the day was so beautiful. All the food looked delicious--but you had to eat everything without utensils? Wow. I guess that might slow you down a little bit at the buffet at least! : )

paz - hopefully you get to attend one as it's great fun.

farmgirl - yeah, no utensils since it's quite an old style wedding. I'm not an expert with eating with my hand so I do take my time with it.

hi Boo-licious, thanks for sharing this. It all sound and look so exotic. And the food - ahh my favourite beef rendang. Btw, didn't they look at you funny for taking pictures of the food. ;)

Wow, you really take great pictures. You know so much! I want to go to a wedding...

Food plays a major role in making an event successful. It is also necessary to select the best food option and catering service. I am absolutely amazed at how terrific the stuff is on this site. I have saved this webpage and I truly intend on visiting the site in the upcoming days. Keep up the excellent work.

I have heard fine obsessions about this topic. Is there a way I can move all my word press content into it? Any kind of assist would be very much respected!
Android Application Development