We finally made it to the Songkhla Hawker located around the Chow Kit area late last week and it was a wonderful experience. This hawker stall was first mentioned by the Fried Chillies foodsters who have done a review of this place. They also coined the name Songkhla Hawker for this unnamed stall which I think is perfect for them since they serve Northern cuisine with Thai influence.

We ordered a selection of food together with the Nasi Dagang, Nasi Kerabu and Laksam. Sadly, I was not able to take pictures of what we ordered as the lighting was horrendous. Even with a flash, the food looked overexposed. Hence I only took pictures of the stall which were lit up especially the desserts as that was brightly lit with a fluorescent light.

Kelantan is well known for it's rice dishes and they start having theirs from early in the morning. I still remember having a breakfast of rice, satay and peanut sauce in Kota Bahru. Nasi dagang is actually an east coast signature rice dish as it is also served in Terengganu. However in Kelantan they use reddish brown rice while Terengganu's version uses white rice. It is traditionally served with kari ikan tongkol (Malay for tuna curry) which has coconut milk and palm sugar. Songkhla Hawker's version was a bit chewy for our taste as the red grains felt a bit uncooked. However their hands down winner is the nasi kerabu which is the best I have eaten so far outside of Kelantan. The rice is coloured a nice tinge of blue and tossed with finely shredded herbs, raw vegetables like bean sprouts and chopped long beans and sprinkled with sweet fish sambal. This fish sambal is made from grated young coconut fried with shredded baked fish, shallots, black pepper and ginger that is pounded. If you are in Kelantan, they have many varieties of nasi kerabu with different colours.

This is a snap I managed to take off the dishes that you can pick from to eat with your rice. The top ones look like fried fish with sambal and there is a selection of vegetables like water spinach (Malay for kangkung), long beans and cabbage. 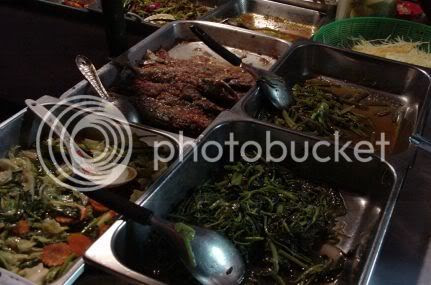 We had the famous Thai salad, Som Tam which is made from shredded mango (seen below). They will pound the dressing in that brown bowl using the wooden pestle. The Som Tam was not too bad even though it was not too spicy as I think someone ate a whole gulp of chilli padis in their portion. 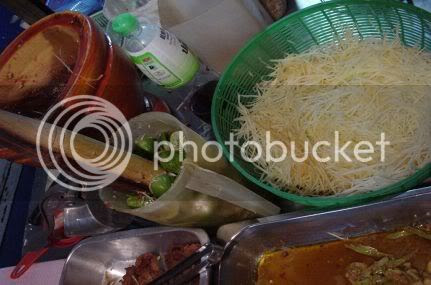 This is solok lada which is eaten with Nasi Kerabu. It is fish paste mixed with grated coconut stuffed in a green chilli. Really nice stuff as you get the sweet and spicy flavours when you bite into it. 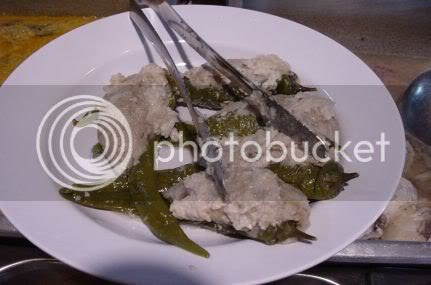 This is Ikan Bakar(Malay for grilled fish) that is usually grilled over charcoal fire. There was also a stall selling Kerang Bakar(Malay for grilled cockles) but we did not order any. We also had Kelantan laksa called laksam that was not too hot and spicy but came with a creamy coconut milk broth mixed with flaked fish. I love the broth which went well with the thick rice noodles and ulam (Malay for herbs) they sprinkled on top. 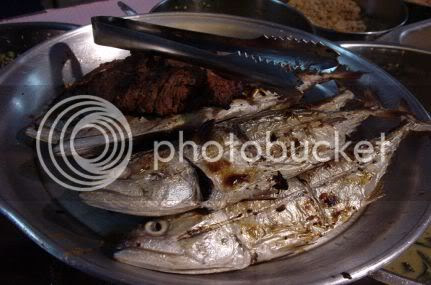 This stall has lots of desserts which was given a seperate review by the Fried Chillies foodsters. Here you have an assortment of steamed pumpkin, taro, sweet potato and tapioca. Usually when one orders the pengats below, they will add in say a piece of steamed sweet potato.

This is Topak Sotong, something I have never seen before. The sotong/calamari has glutinous rice stuffed inside it and is served with a sweet broth. 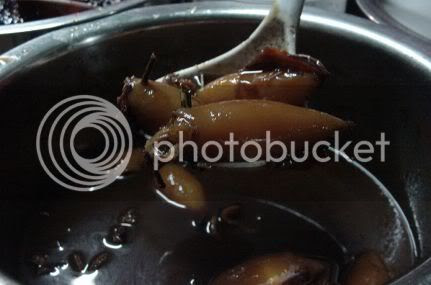 This is one of Splashie Boy's favourite Malay Kuih (Malay for cake), Kuih Pelita that uses banana leaves like a mould. The white bit is made from coconut milk while the bottom is soft jelly like and flavoured with pandan. It is quite similar to the Thai dessert Tako except it is softer and does not have any water chesnuts inside it. 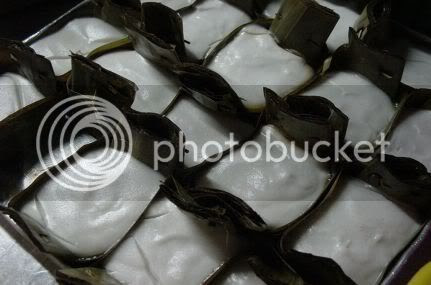 We ordered this but I am not too sure what is this. It kinda tastes like it is made from dough made from glutinous rice flour that is tossed in freshly grated coconut. They give you a gula melaka (Malay for palm sugar) syrup to dip them into. 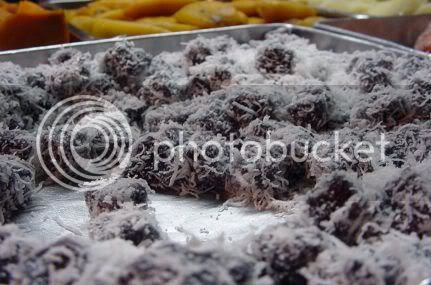 This is Kuih Keria, a deep fried doughnut made from mashed sweet potato. It is then dipped in melted sugar giving it a sweet crust. 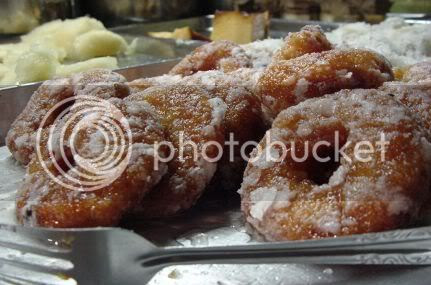 This is Putih Naga which has a slice of banana stuffed in tapioca. It is then steamed and tossed in freshly grated coconut. 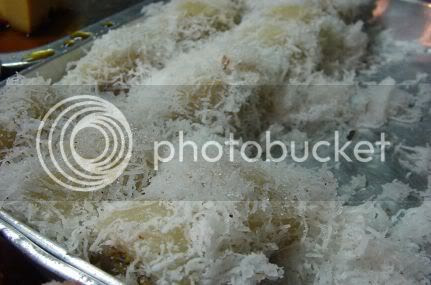 This is wajid which is made from black glutinous rice, pandan leaves and coconut milk. 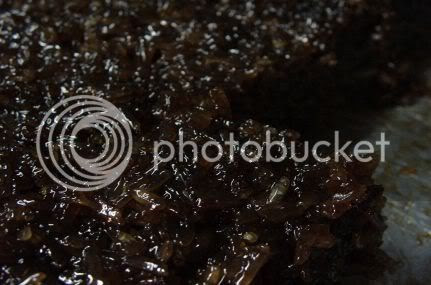 There were a variety of bubur manis/pengats that is desserts served with sweet coconut milk broths. They had Pengat Pisang (Malay for Banana), Pengat Sago (sago pearls in a cube form and coloured), Pengat Jagung (Malay for corn) and Pengat Kacang Hijau (Malay for green beans).

One interesting pengat we had was these multi-coloured glutinous rice balls that reminds me of the Chinese tong yuen with slices of nangka. 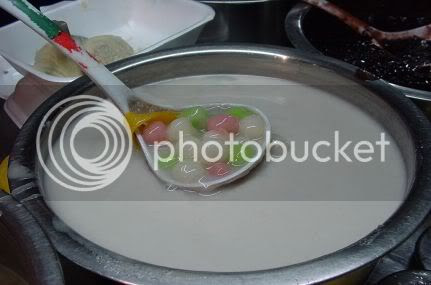 If you are around that area at night, do give this stall a try especially if you love Kelantanese food. Details of the exact location with a map can be found on the Fried Chillies review.

Oh wow, everything looks so delicious. Except the sweet sotong? How come we don't have these in Penang. What we get is the Haadyai group. But I guess worry not 'cos pasar ramadhan is coming soon. Whee!

clare - too bad no pix of the nasi kerabu, as it is so amazing with it's blue rice.

5xmom - I read that the Thai group is at South City Plaza here. Think this food is slightly different as it is Kelantanese food with a touch of Thai.