Sorry about today's posting, I was rushing a bit this morning hence I could not do a full write-up of the trip but no worries as I will do it now now now! (in between watching Desperate Housewives)

Last weekend, we did a little day trip out of the bustling Kuala Lumpur city to a sleepy little town called Kuala Selangor, located at the mouth of the Selangor River (Kuala is Malay for river mouth). It took us about an hour and a half to get there using the old trunk road from Sungai Buloh. This sleepy little town is quite famous for it's seafood market at the riverside shanty called Pasir Panambang and the fireflies sanctuary. It made a real change to drive to the town during the day as my last visits were usually at night to see the fireflies.

We were on the hunt for seafood since it is reputed to be fresh and cheap and came equipped with two big cooler boxes. As the fishing boats come back in the afternoon, one should visit the market in the afternoon around 3.30 to 6 p.m. to get the daily catch. There were quite a number of stalls selling a variety of seafood.

We saw these big fresh prawns in ice that we had to have for our dinner that night. I also bought some to stock up my freezer at home as they were pretty reasonably priced. 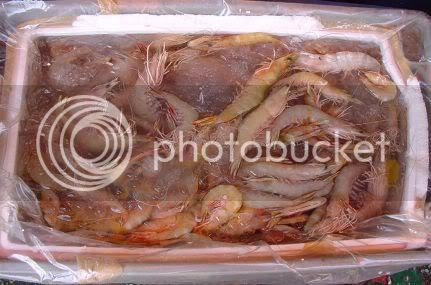 We saw a couple of stalls having this skinned fish but we had no idea what it was until we spoke to one stall owner. Turns out it is baby shark that they had skinned which they usually cook in curry.

There were a lot of different varieties of clams, ranging from the blood cockles, conch shell clams, whelks and bali tong. I never knew conch shell clams could be eaten and have been collecting the shells from my walks on the beach. We bought some clams to be cooked over the barbeque that night. 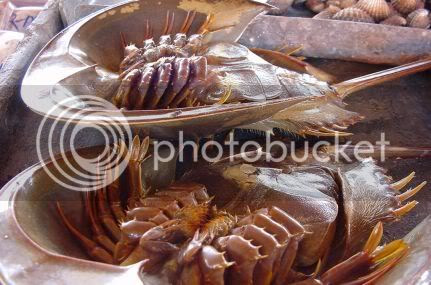 There were a few fresh crabs for sale but the market seems to be mainly selling fish and prawns. 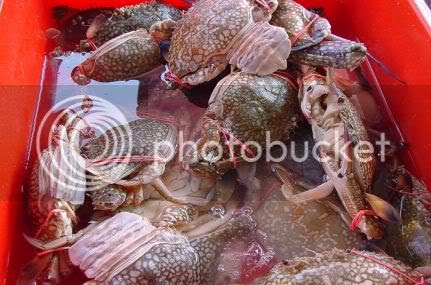 These are mantis prawns (La Liu Har in Chinese) that look a bit like bugs with their squarish bodies. 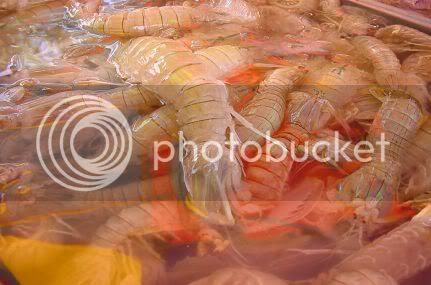 We bought a few for the dinner and I also got some to try at home. The man at the stall was very nice to help and show us how to cut them up and peel them. We bought loads of fish, even one called a Love Fish (Ai Ching Yu in Chinese) that looked really strange with no scales but was covered with thick skin. Other fish we took home was a big red snapper, some small mackerels and a sea bass. We must have made the stall owner's day as he even threw in a free tenggiri fish for us.

Satisfied after all that shopping(the cooler boxes were packed to the brim!), we took a little break at the nearby stalls and had some refreshing coconut drink before heading back to the city. We also had some pulut panggang (Grilled glutinous rice) that had some dried prawns inside it. 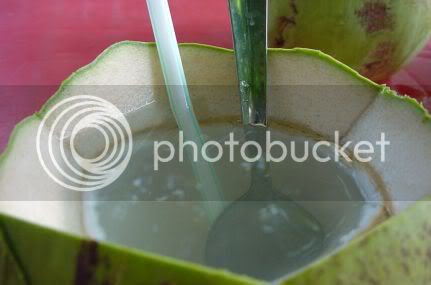 Stay tuned tomorrow as I will post on what we cooked from the trip.

What an absolutely unusual bunch of seafood - haven't tried horseshoe crab before and the spiky shellfish - wonder if there's any good-size meat in them?

cath - We didn't get those as we bought my conventional stuff like the fish and prawns. Maybe next time, I will get more adventurous and try the conch shells one.

Mrst - Wait till you see the cooked food pictures. Those were super yummy.

boo_licious,
What a gorgeous seafood photos you got here :))
It has been a long time since the last time I saw horseshoe crabs. I was at grandmother's house more than 3 decades ago in Batu Maung Penang when I tasted horseshoecrab's eggs for the first time, and I got really sick later.

Horsehoecrabs don't have meat, but the horshoecrab fans enjoy their eggs (the size of small sago). The horseshoecrabs were roasted over open charcoal fire. When they were cooked, cut them opened and scooped the eggs out.
The eggs were eaten with air asam jawa (mixed with sliced onions, bird chillies). That was how I remember they ate the horseshoecrabs back then.
Sorry for a long comment.