Occasionally we both get the urge to just eat some steak and this time round, we decided it was time to make some at home. Hence we went to Bangsar Shopping Centre and wandered around the Cold Storage to pick up some rib eye steaks for dinner on Saturday night. We did pop over to Mr. Ho's Fine Foods that has been nicely renovated and saw some fantastic wagyu beef which we drooled over but decided it was way too expensive.

When I was at the supermarket, I had a slight memory lapse so I kinda forgot that I had ran out of instant dashi granules and there was no young ginger at home so I had to omit that from the sauce plus the roast pumpkin mash. My cookbook of the week (that I was currently reading) was my copy of Yoshoku by Jane Lawson, which I just got from Kinokuniya after ordering it since end of July. I decided to pinch bits and pieces from it to make the roast pumpkin mash(which originally has ginger in it) and the mushroom sauce (which has dashi in it).

The pumpkin was left over from my dessert efforts for SHF 12 and incredibly easy to make since it just involved bunging the sliced pumpkin in the oven to roast for about one hour plus. This will make it soft and you can mash it with butter and sesame oil till it is smooth. The mushroom sauce was just something I made from whatever I had in my fridge as the original did ask for a selection of mushrooms. Earlier, I had spotted some baby shitake mushrooms (my favourite) at the supermarket and bought some to keep for the next meal. You don't get these baby ones all the time so whenever I see any, I always buy a packet. I did stick to the original flavouring of adding soya sauce and mirin even though I had to omit the dashi. We also had some blanched baby pak choy as greens which was leftover from another meal we had.

I must admit for a meal that was made from all sorts of things I had left over from my fridge, it was yummylicious. The steaks were juicy and went well with the pumpkin mash and creamy mushroom sauce. 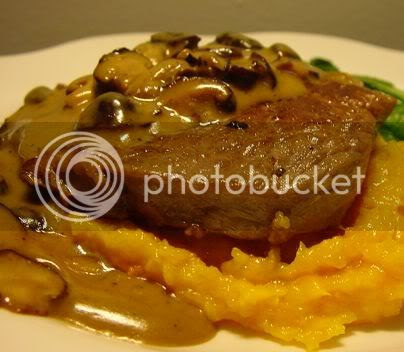 Oh sigh...another yummy post from Boo :) I so love going to Cold Storage too but grocery shopping there's too expensive for me! And Mr Ho's really good! You should try the salt beef there!

sue - Thanks for the nice compliments. I have never tried the salt beef although I always see it. I must give it a try the next time I am at Mr. Ho's.