After all that great seafood shopping, it was time to cook them all up so we could feast on it. We headed over to Mr. and Mrs. ecr's place to grill, roast, steam and stir fry the food. We had great fun at their place and met some of the residents there too, the cats and Frankie the dog. Not sure how many cats are there in total but I did manage to catch one in action. This is Coco that I am holding, isn't she a sweetheart? 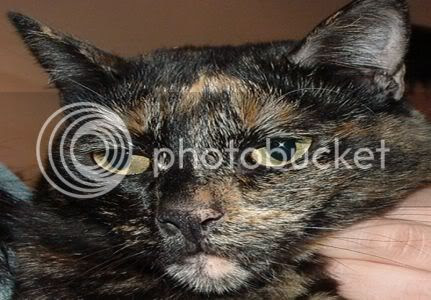 Here's Frankie, she is just wondering why are there so many people invading her kitchen and cooking up all this delicious smelling food. 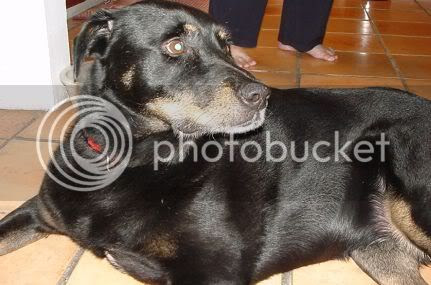 Mr. ecr was manning the grill expertly where we grilled two fishes and the clams. Unfortunately the mackerel(Ikan Kembung in Malay) and sea bass (Ikan Siakap in Malay) stuck a bit to the grill but that did not stop it from tasting great. The fish wrapped up in foil was a free fish we got, another mackerel which was bigger (Ikan Tenggiri in Malay). 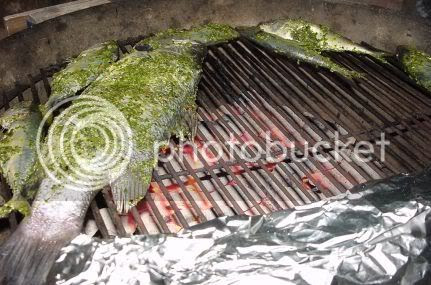 I made two salads, a cucumber and pomegranate one as I had just found some pomegranates in town. Recipe for this salad was from Nigella Lawson's Feast that involved tossing the cubed cucumber, pomegranate in some chopped mint leaves, spring onions with a dash of lime juice. 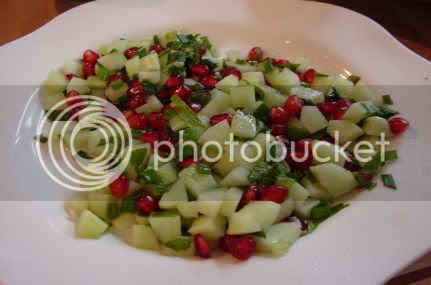 Here is the grilled fish you saw earlier on the grill, it has been marinated by Shiewie with chermoula, a spicy Moroccan herby spice mixture of cilantro, parsley, garlic, cumin, coriander and lemon juice. Very yummy and I love the chermoula as it smelt and tasted great. 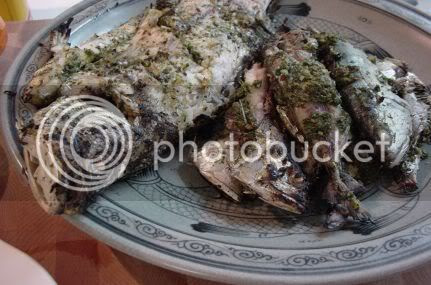 This is the second salad I made, a mango and chicken one which was also a Nigella Lawson recipe but from Forever Summer. It had shredded gem lettuces, chopped mangoes, chicken cubes tossed in lots of spring onions, red chillies, lime juice and chopped coriander. 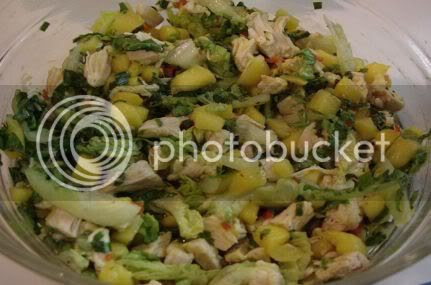 We had a bit of clams which I tossed in chopped red chillies, lemon grass and ginger shreds with a touch of mirin. These were wrapped up in foil and grilled for about ten minutes. 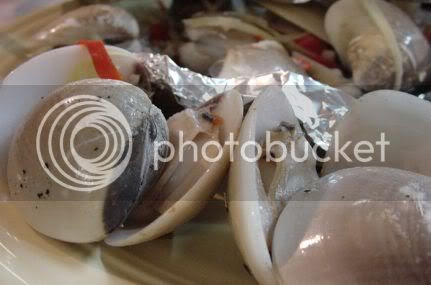 Maukitten cooked the mantis prawns you saw earlier in this yummy chilli-tomatoey-plum sauce. This is a perfect dish with hot rice and I must remember to get this recipe so I can cook my mantis prawns with this too. 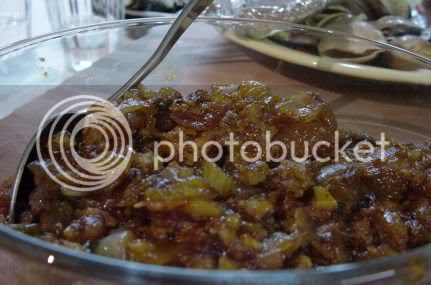 I mentioned the love fish earlier and this was steamed Chinese style with a sprinkling of ginger shreds, a dash of soya sauce, sesame oil and mirin. Unfortunately I did not get a picture of the whole fish as we had to cut it up to fit the steamer. 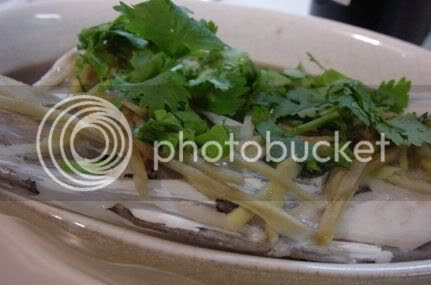 Mrs. ecr made some garlicky oven roasted beans which was yummy. 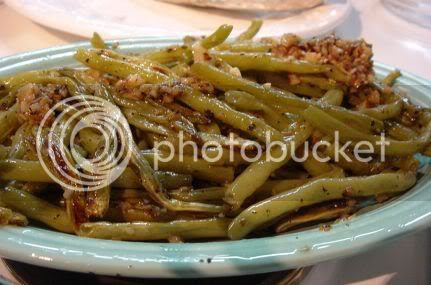 She also roasted a red snapper(Sang Hoong Joe in Chinese) in the oven using lots of cilantro and Indian spice paste which tasted great. 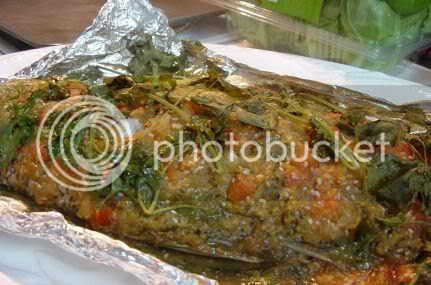 Maukitten steamed those big prawns you saw in yesterday's post with some fragrant home made lemongrass oil. 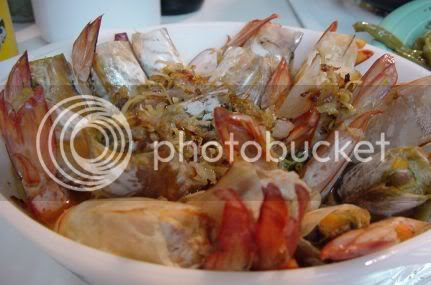 The dinner table was laden with food that we were worried we could not finish the food so reinforcements were called to help. See the last fish at the end, that was our free grilled fish that Shiewie had smeared with some bottled sambal sauce and sprinkled some shredded kaffir lime leaves, chopped lemon grass and calamansi juice. 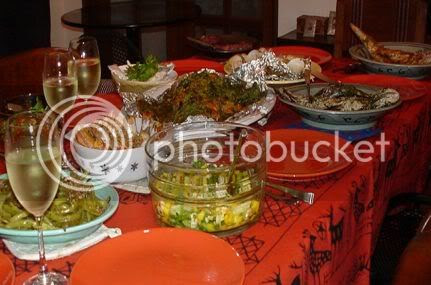 As everything was nice and light, we had room for dessert which was a yummy plum torte that Shiewie had baked the night before. 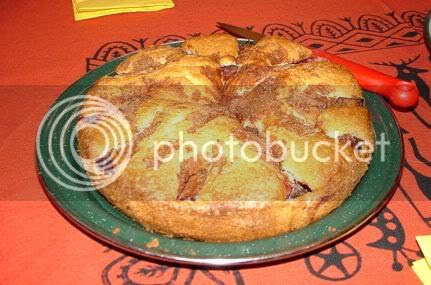 Mrs. ecr made a beet and polenta cake which was great as it was not too sweet and so moist. 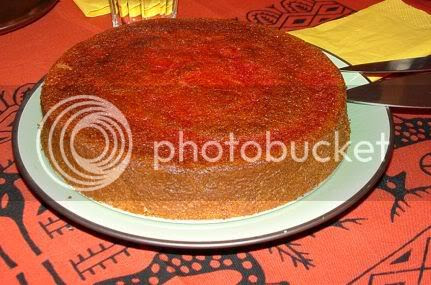 It was great fun that we did not even feel the time as it was past midnight by the time the last dish was cleared and washed. Thanks so much for the great time, Mr. and Mrs. ecr for volunteering their place, Maukitten for driving through those trunk roads and Shiewie for organising.

Shiewie has also put up more pictures and the write up of the market visit and the dinner on the e-gullet forum.
Posted by boo_licious at 9:40 AM

It looks like you had so much food to eat. The shrimp, prawns and salads look so good. After eating all of that, you would have to roll me home! =P

nice pix! got doggie also for once! hehe.. anyway, just wondering how did u post all the pictures as ONE post? what do u use? for me, i use Picasa and each pix comes as one post with comments also.. a bit space wasting sometimes.