Last Friday, we ended up at Bangsar Village shopping centre as I wanted to do some quick grocery shopping for the IMBB fry up menu. As we were rushed for time (the shops close at 10pm), we ate around at Basil Thai Nudle Bar located within the shopping centre rather than joining the crowds around the Telawi area. This Thai place is part of a chain of restaurants which have numerous outlets in most of the major shopping areas. Each outlet have your basic Thai dishes but run on slightly different concepts. For instance, the Rain Nudle House in KLCC and Basil Thai Nudle Bar is quite similar since they serve noodles and also some Thai dishes with rice. However, their Amarin Heavenly Thai outlet in Mid Valley Mall serves more fine dining Thai food.

It was a good choice as the food came quickly so we were able to shop comfortably rather than rushing through our purchases. We last ate at Basil when it first opened and although we thought the food was not too bad, it was a tad bit expensive as the portions were tiny. This time round, they seem to have sized up their portions probably after some feedback from their customers.

We ordered some fried wantons that were tied up to look like money bags. Not too bad but my only complaint was their thai sauce was a bit watered down and did not have much kick. 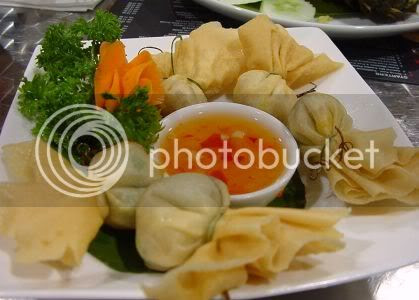 Splashie Boy had Pineapple Fried Rice with Chicken that came in a hollowed out pineapple. The rice was lovely and you can taste the spices plus the pineapple they use to fry it with. 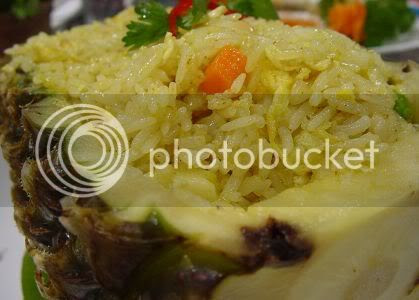 I had the Thai Duck Noodles that came with chunks of duck meat and rice noodles in a flavoursome broth. Whenever I eat noodles, I always end up drinking a lot of the broth it comes with especially when it's nice. This one was yummy and the best thing, no MSG as I did not feel the usual after effects of consuming MSG like getting thirsty. 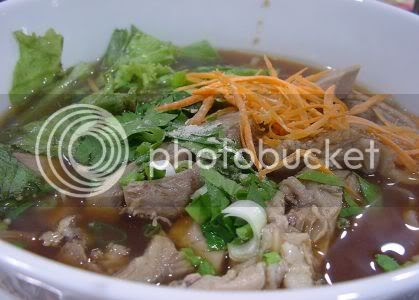 Basil Thai Nudle Bar
G10, Ground Floor, Bangsar Village
No.1, Jalan Telawi 1
Bangsar Baru
Kuala Lumpur
Tel No: 03 - 2287 8708
*Disclaimer: The opinions expressed here is entirely based on my personal tastebuds and may vary for others. The reviewer also declares that she has not received any monetary or non-monetary compensation from the restaurant for writing this review.
Posted by boo_licious at 6:20 AM

Unknown said...
This comment has been removed by a blog administrator.
10:54 AM

Does Basil Nudle have a smoking section? I like the Rain Nudle and Bangkok Jam outlets, the former because it's close to the office, and the latter bcos it's close to home. :P

Most of their menu items are usually nice, but I suspect their dipping sauces come from a bottle rather than chef-made.

Everything looks good. I'd especially like to taste the pineapple fried rice with chicken in the the pineapple shell. I like the idea of the rice in the shell.

tiger - not too sure about the smoking section bit as we don't smoke but it should have one like all places. Chilli sauce from the bottle, yeah I won't be surprised since they have so many outlets, it makes sense.

Paz - this fried rice was nice. Rate it as nice as the one in Coca which we usually order.