Meme: Childhood Memories. It's all about food.

I have been tagged twice for this meme by the lovely Mrs. D from Belly Timber and the wonderful Michele (all the way from Gay Paree) from Oswego Tea so I really better get on with this as it's been sitting around my to do list for one week.

This meme is all about our childhood memories for five things related to food. I have lots of them since I have fond memories of my dad taking us everywhere to eat since he loves to eat all the time.

Cakes and what-nots from our kitchen

My mother has always loved to bake so our house used to be a hive of activity when I was young. She used to take cooking and baking lessons which I will tag along since I was too young to be left at home alone and had not started schooling yet. I still remember following her to these classes, one was Mrs. Fernandez's royal icing and sugarcraft class where she learnt how to sculpt flowers from icing.
The best part about having your mother as a baker was she used to make all these wonderfully decorated cakes like a butterfly shaped one for my birthday, a teddy bear one for my brother and a doll one for my sister's birthday. I always had nice stuff to bring to school for break time and people asking me for my mother's specialities. We used to also help make biscuits ( I still remember helping to make the decoration for pineapple tarts) and packing them in tins to be given away to friends and family especially during Chinese New Year My mother is the utter perfectionist and she will spend hours or days testing recipes until it's perfect. One such example is her famous chiffon cake which is light and fluffy like cotton wool that took a few tries to make it perfect.
Biscuits from my past

I saw these recently in a shop and thought I'll share them with all of you as I used to love them. Not sure what their actual name is but we call them belly button biscuits since the bottom bit looks like a belly button. I used to love to seperate the sweet icing on top and eat them slowly to savour them. 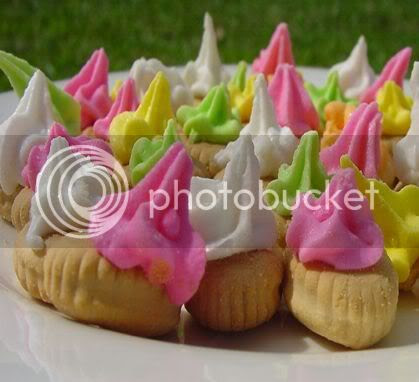 Ever since I was a kid, I love animals. I will feed strays with scraps from my plate under the disapproving eye of my mother. Once we kept chickens in the house which use to lay an egg for my breakfast. Not sure what happened but they died and ended up at our table as dinner. When I heard about that, I refused to eat that meal in protest of the chickens whom I love. My mother was totally exasperated with me and that night I went to bed with a hungry tummy.

Eating out in the old days

When I was a kid, we used to go down to the Kuala Lumpur city centre quite a lot to visit my aunt as she stayed right smack in the busiest street namely Petaling Street. It was lots of fun as there will be the old wet market, Central Market round the corner (it's now a cultural market), lots of hawker stalls with noodles to eat and of course we always got an egg tart as a treat from Tong Kee Confectionery. I used to also get a coconut bun to bring to school during break time. What amazes me is I still go to that confectionery to buy their egg tarts and they taste just as good as I remember them.

Although I am not the only one in the family but because of the large age gap between my brother and sister, I was mostly alone during my childhood years. When I was old enough, they both went overseas to study. Luckily I had a family of five girls living next to my house so I used to spend all my time there. We played all kinds of games including "masak-masak" where we used to pretend to cook with leaves or seeds we found in the garden with plastic utensils. It was great fun to pretend that we were just like our mothers laying out lavish parties for guests, baking away yummy cakes (their mother was also a great baker) and looking after the family.

I need to tag four people for this meme, so I thought I'll pass the baton on to an all Malaysian food blog group:

Thanks to Mrs. D and Michele for tagging me. Now I need to figure out that complicated instruction at the end of Michele's meme as I am not sure where I should update the list for this meme at.

biskut pusat! that was such a favourite.

what a wonderful post! we used to play masak-masak too, cooking with leaves and rubber seeds and balls made from clay... :-)

I remember those cookies! Used to have them as a child too!

I enjoyed all your stories. What a determined child you were, when you decided not to eat something. I'm impressed. I think I would have given up long ago. LOL! ;-)

I like the definition of masak-masak and envisioning the picture of you and your friends playing at your childhood games. I think most young girls tried to imitate their mothers' behaviors.

Thanks for sharing your stories.

q - those were the good old days, no computers, just play with whatever around the garden.

paz - everyone seems to love that biskut pusat. I was a naughty child according to my mother since I never followed instructions! Just did whatever I like.

What great stories! We also used to play a game like masak-masak here and it's called "luto-lutuan" which in english means something like "cook-cook"...so amazing how there are so many similarities between cultures around the world.

And speaking of similarities...we also had those exact same biscuits! I almost fell off my chair when I saw the picture, because I haven't seen them in quite a while. My friends and I used to call them "iced gems" (I think), but that was the brand and not the actual name of the biscuit (which I don't know) :-)

chichajo - Amazing how similar things are within Asia. Iced gems sounds like the biscuits since they do look like gems with their pretty colours.

Hi Boo, nice post on your childhood memories! The cookies are so cute and colourful and I like the story of how you protested your mother's chicken dinner :)
Thanks for doing the meme!

Nice stories about your childhood memories!

Thanks for tagging us! Its our first sort of food blogging event!! How exciting!! Sorry, still havent gotten around to doing the meme. One of us will do it soon.

Any idea if Mrs Fernandez still giving lesson on Sugarcraft? How can I keep in touch wt her? Many Thanks.