Malaysians are crazy about food especially nasi lemak which some proclaim as our national dish. In honour of the famous dish, Fried Chillies had a Best Nasi Lemak event at the Lions Club fair which was held in aid of the underprivileged children development programme. It was a great bash and full of yummylicious food and like what the banner says below, it brings great people together! Not only that, it was for a great cause. 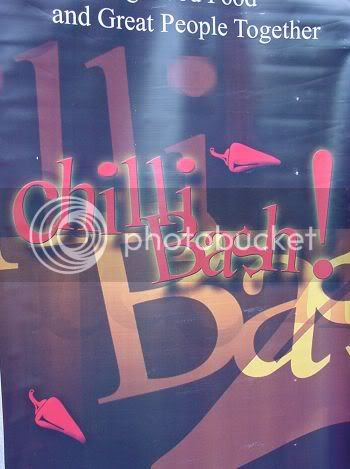 For those who are in the dark about Fried Chillies, they are a group of foodsters who go around eating their way through yummy food in Malaysia. They even have published their own guide book called the Foodster's Guide as seen below. Excellent stuff which I use to refer to whenever I am hungry for some food. 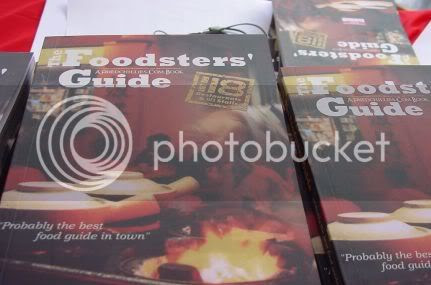 The bash was held at the Bukit Kiara Equestrian & Country Resort hence the picture of the horse. Lots of them around as people were riding that early Saturday morning and taking lessons. It was my first time there although I always pass by the club and I was amazed at how big it is inside. I was super early that day as I had an errand to do plus I had heard horror stories about how the food finished quickly the last time they had the bash. See, they were not even ready when I was there and everything was still in the works as seen in the picture.

Since I was so early, I had to wait quite a bit before it started. I could not also take pictures of all the stalls too as some had covered their food to avoid those pesky flies (they're always around when there is food!) so you may find some stalls do not have equal number of pictures taken. Here is some essential bits of nasi lemak, the yummy fried peanuts and anchovies (Ikan Bilis in Malay) that must be sprinkled and eaten with nasi lemak. 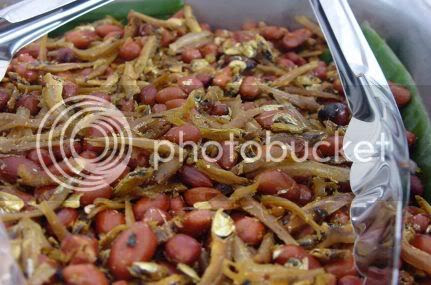 Another important part is the rice of course which is cooked with coconut milk and flavoured with some pandan leaves, ginger or even lemon grass. It is also essential that the rice grains are fluffy and not sticking together. 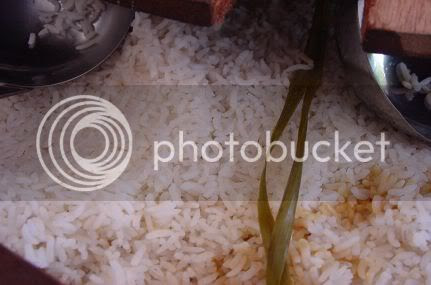 I thought I'll share with you what they cook the nasi lemak in i.e this wooden tub that is placed over a wok to keep it warm. 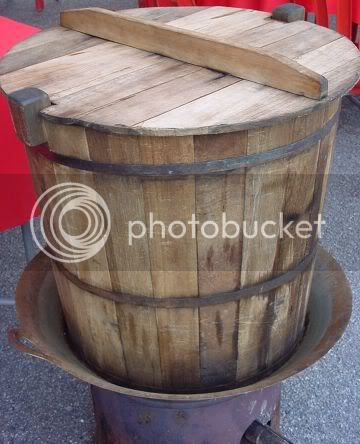 There were five stalls which were shortlisted as the best ones by the Fried Chillies foodsters and one of them was Nasi Lemak D'Condo Segambut. Their specialities are quail eggs sambal, something you don't see all the time as usually the sambal is made from chicken eggs. (sorry about the wrap, it was so early that she had not unwrapped it and since the flies were diving around, I did not want to risk opening it) 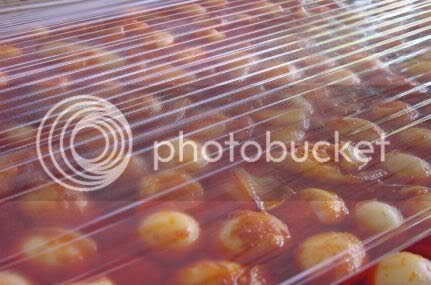 They also serve some yummy chicken curry with lots of rich coconut gravy that goes so well with the coconut rice. 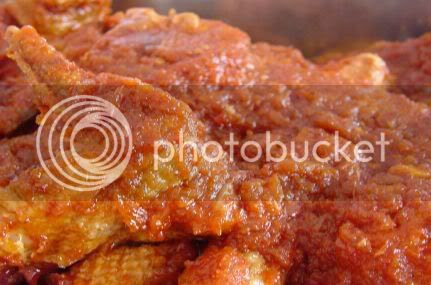 I managed to take quite a bit of pictures of the second stall which was Nasi Lemak Raja Abdullah as I was in front of their stall just when they started taking out their foil wraps. They are famous for their fried cow lungs (Paru in Malay). 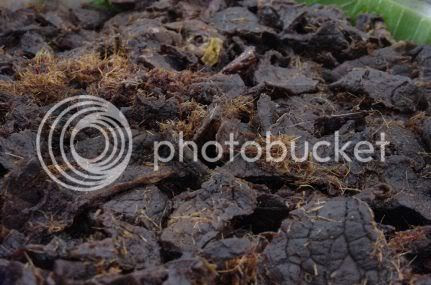 One essential ingredient for nasi lemak are eggs which is served in so many ways. Here they serve their nasi lemak with fried eggs. 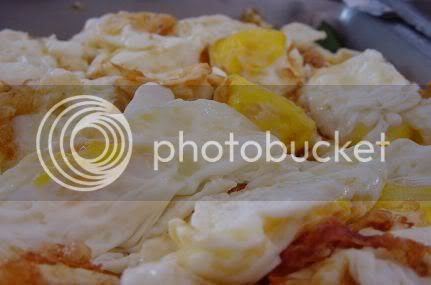 This is sambal sotong (Malay for brown calamari curry) which is also an essential in all nasi lemak. 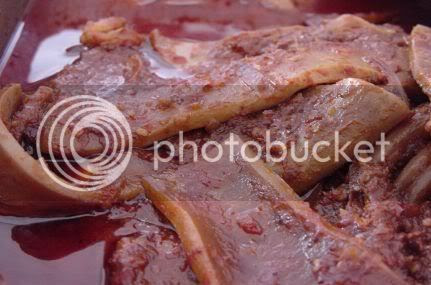 This is beef rendang where slices of beef is cooked in a gravy made from toasted grated coconut and spices. 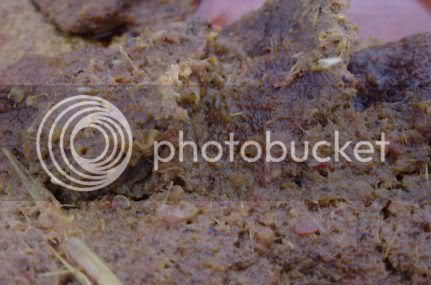 This is the chicken version which was a lot drier but still full of flavour. I love the little bits that come with it which is the toasted coconut (kerisik in Malay). 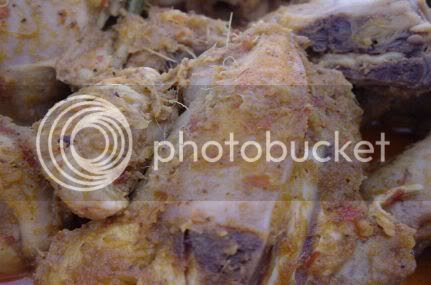 This is the chicken curry that you can opt for in your nasi lemak with lots of gravy. 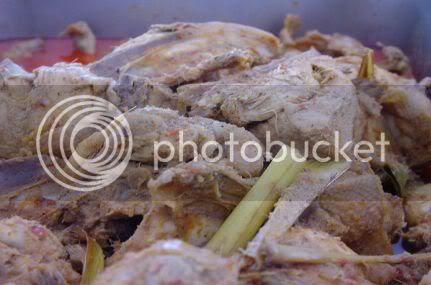 The next stall is Nasi Lemak Tanjung Puteri who had jaunty chef hats and Harrods aprons. Their main feature was their tower of ayam goreng (Malay for fried chicken). 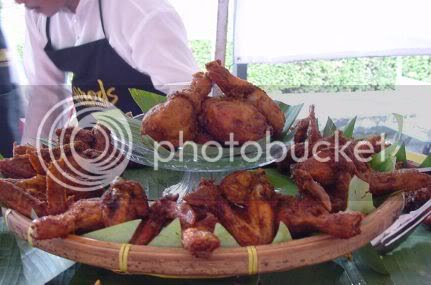 Another version of sambal telur, this time it's hard boiled eggs which have been deep fried and then cooked in a sambal sauce. 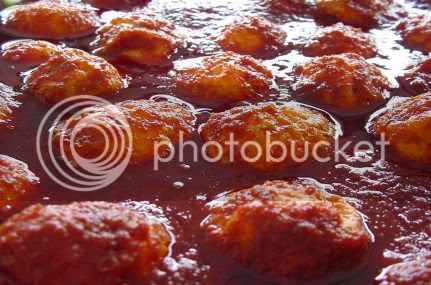 I didn't get to take many pictures of Nasi Lemak Tanglin's offerings as they were mainly covered but I managed to sneak one picture which was their sambal prawns with petai. I hope you can see a bit of the petai swimming in the sambal sauce. 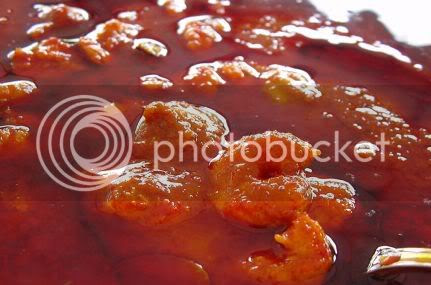 The last stall which was a bit late was Madam Tea's Nasi Lemak from Jalan Ipoh. They served their nasi lemak with hard boiled eggs. 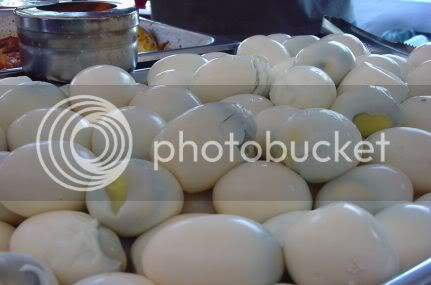 Their rendang chicken was a bit different from the others with curry leaves and a rich and creamy coconut gravy. 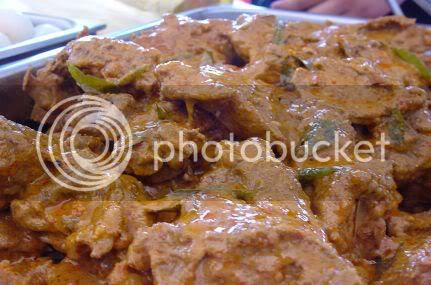 Their best seller is the sambal prawns which had everyone raving about. 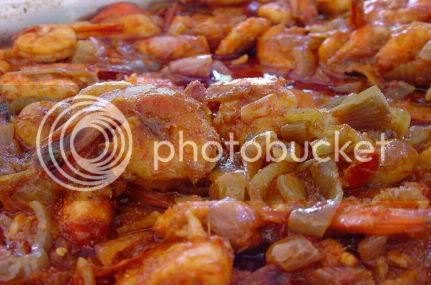 They also had some curried potatoes to serve with their nasi lemak. Unfortunately as they were late, I had no chance to sample the food since I was rushing home. 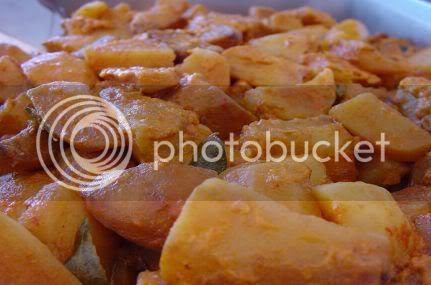 Besides the nasi lemak, they had lots of other food stalls which were serving so many things such as taiwanese sausage, taiwanese pizza, bubble tea, mooncakes, konnyaku jellies, ice cream potong, assam laksa and etc. I managed to catch some pictures like this ang koo and fried taro dumplings.

They even had a lok lok stall there where you can chose any stick and cook them in a pot of boiling water. See the sauces in front, you add them to your cooked lok lok sticks. 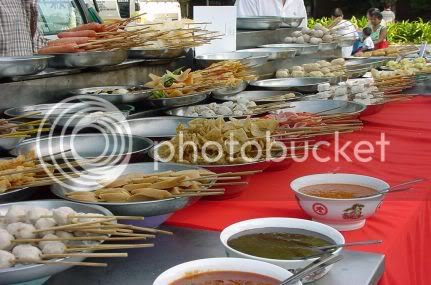 This fascinated me, a new fangled idea to eat your fishballs with curry sauce/oil! 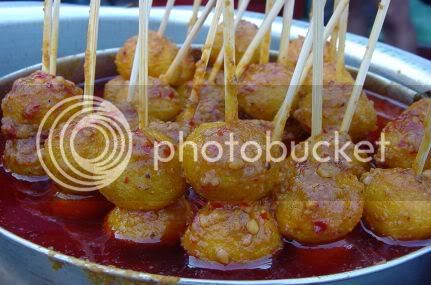 I had a great time but since I was rushing off, I did not really see the fair in full swing as they had bouncy castles and games inside the stadium. I am sure there will be more write ups about the fair and the bash so I'll link them once they're up.

Thanks so much to the Foodsters for organising a great event and I hope the Lion Club managed to raise lots of monies for the kids.

Oh no, poor mrs. T. I think it's time you try and persuade your hubby to take you home so you can enjoy all the local food.

my goodness! I'm so jealous!!!! When am I going to get to have all these yummy foods again...sob,sob.

You always post the yummiest pictures on your blog!

I'm so, so, so jealous! Oh why did I have to come here. *sigh* Nasi lemak is my favorite. I ate it so many times when I was in Singapore. I can't wait to go back...