Recently I got this month's edition of Flavours, the locally published food magazine and wow, was I blown away by the stuff they had inside this edition. They had the low down on Sarawak food which looked so good that it got me hankering for Sarawak Laksa, wonderful ideas to use caramel and this tiny booklet full of Malaysian desserts that were fanciful and unique in conjunction with the Malaysian Food and Fruits Fiesta.
I was eager to try this fruit compote as Splashie Boy loved the picture of it in the magazine when he first saw it on the newstand. It is just a simple compote, nothing brilliant but I love the simplicity. Very nice and cooling especially when those tropical nights come back. It's up to you to mix whatever fruits you like, I used a variety which we like and whatever I had in my fridge; mango, dragon fruit, honey dew and jambu air (Malay for water apple). The original recipe actually uses 50 grams each of watermelon, honey dew, musk melon, strawberry and mango but I have adapted the recipe below. Sago pearls were used but I reckon you can also use those nata de coco cubes or agar-agar cubes (as suggested in the booklet) to make this compote if you wish that would give it a crunch. If you have a melon ball scoop, use that as the dessert will look more impressive. In the absence of that gadget, I diced my fruits instead. For the ginger syrup, I added about six slices of ginger as we love the extra gingery taste.

Cook the sago by boiling it in plenty of water for about ten minutes. Turn off the heat and cover the pan. Allow the sago to steep for fifteen minutes until the pearls are translucent. Rinse in several changes of cold water. Drain.

Boil together all the syrup ingredients. Remove the ginger slices and cool before using. In a mixing bowl, combine all ingredients and let them infuse in the refrigerator for two hours. Serve cold with ice cubes or shaved ice. 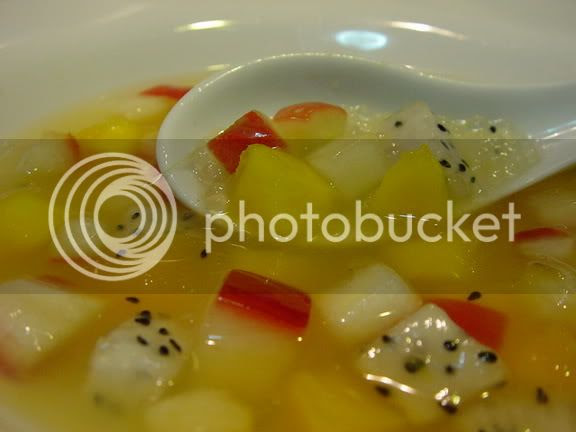