Recently the days have turned out to be rainy and slightly cold (compared to the usual tropical heat) that I had an opportunity to make some soup. The Chinese love to drink soup especially those double boiled ones with lots of Chinese herbs as it is meant to be good for your health. Although we love to drink soup, I don't make it all the time as we get loads of leftovers if I make one batch and sometimes the weather is just too hot for soup. My soups are usually chock block with ingredients which we will just eat as one meal with rice.

When I was a kid, my mother used to make soup most of the time so I grew up with some favourites. One of them is this Old Cucumber and Chicken soup which is pretty standard fare in most Chinese families. The old cucumber has an orangy brown skin and is used mainly for soups. Soups are always the easiest to make as it just involves throwing in some ingredients and boiling them for a few hours. One way to guarantee success in your soup is to pepper it with yummy ingredients like dried scallops and red dates. Some families use dried cuttlefish instead of dried scallops to flavour the soup. Usually these soups have enough flavour that you will rarely use salt to season them. This soup is good for your lungs, blood and your eyes so not only do you get a simple meal, it's also nutritious for you.

Remove the skin from the chicken legs and trim off the fatty bits. This is important to ensure that your soup is clear from oil. Cut the old cucumber into half. Scoop out the seeds. Cut the cucumber in small pieces leaving the skin intact.

Put the chicken legs, chopped old cucumber, dried scallops and red dates in a soup pot. Add enough water to cover. I usually add hot water from a kettle to speed up the process. Leave to boil, then turn down the heat and let the soup simmer for about two hours. You may find the chicken legs to be too soft if you boil it for three hours. The best way to prevent it is either use free range chicken like Kampung Chicken or don't add your chicken for all the time i.e. maybe for only one hour instead.

Turn off heat and ladle to bowl. This feeds two adults as a main meal with some leftover soup and cucumber for one person. 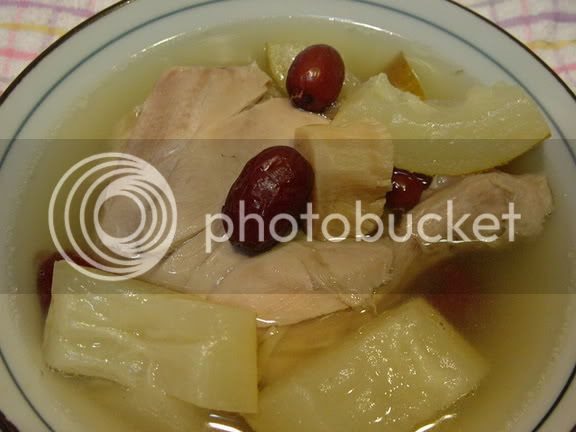