Last month, after I made the mangosteen sorbet, I have been kinda bitten by mangosteen fever. However as they are so expensive, I have been bugging Splashie Boy to get me some from his "kampung" (Malay for hometown village) as they're from his uncle's tree. So last week, he came back with a nice bag of mangosteens. They're quite small but I must admit, extremely sweet and less seeds since they're so tiny. Here's a picture of two of them I captured before I broke them up and made the salad. 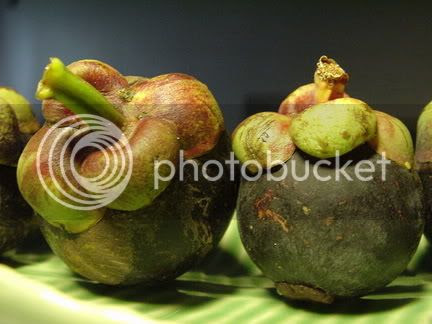 As I said earlier on, I was keen to try out the recipe I found in Flavours that featured the famous mangosteen salad from this vietnamese restaurant in KL called Sao Nam. I made some adjustments to the ingredients and also the layout of the salad after some experimentation. The recipe states dried cuttlefish strips but since I had some sotong (Malay for squid) bakar from Splashie Boy's Pangkor trip, I shredded those for the salad. In the magazine, the salad is assembled in a mound with prawns surrounding it, I tried doing that and failed miserably as it just looked so flat on my plate.
So instead, I whipped out a metal ring and started pressing the grated coconut and the other ingredients inside to make it into a tower. Not perfect looking but I thought it looked interesting. Because it had to be shaped as a tower, I used quite a bit of grated coconut, more than what the salad originally asked for but it was fine with both of us as we liked the grated coconut. If you're making it for yourself, adjust the ingredients according to what you like, i.e. add more coconut or mangosteen. You can see the middle layer where the mangosteen is peeking out.
The taste of the salad is light and refreshing. The flavours seem to come together with the sweet and slighty sourish calamansi lime dressing. Surprisingly, Splashie Boy who does not like mangosteens thought it was great. Too bad I did not have any crackers to go with it as I am sure that would have been even nicer.
Mangosteen Salad

Prepare salad by layering from the bottom in this order: grated coconut, chicken slices, dried squid, mangosteen, more coconut and prawns. (The prawn is on top of my tower) Top with peanuts and sesame seeds before pouring the dressing over. Serve with prawn or fish crackers. 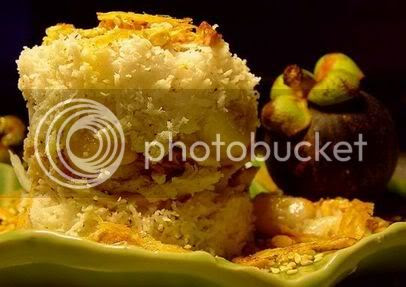