I am definitely going through a Sarawak food phase but don't worry, this should be the last posting on all things Sarawakian. Recently, we were down at the tourist area of Jalan Bukit Bintang as Splashie Boy wanted to go check out some IT gadgets in Low Yat Plaza. Both of us rarely walk around that area and so many things have changed! The stretch of road between Bukit Bintang Plaza to Federal Hotel is now peppered with foot reflexology centres and Middle Eastern restaurants. Wonder whether those centres are a front for some other hanky panky stuff since that area is a notorious red light district.

I had read about the Sarawak, Paradise in Borneo centre from the papers, so I was keen to look for it and try their food out since we were in that area. After walking through the foot reflexology area, we finally found it just after Federal Hotel. The shophouse is niftly designed as every nook and corner is used to house a handicraft shop in front, an area where they display how they weave those baskets that Sarawak is famous for, a tourist centre and the cafe which is at the back.

The cafe serves Sarawak delicacies so you get a taste of the different kinds of food that they serve in Sarawak. I made a beeline for their Sarawak Laksa, my absolute favourite. The laksa is made from a paste made in Sarawak (it seems no one actually knows the way to make it as people in Sarawak just buy the paste) and coconut milk. Vermicelli noodles (beehoon) is used with prawns, shredded chicken, omelette strips and bean sprouts as toppings. The laksa was yummy, I liked the soup as it had the right touch of creaminess from the coconut milk (not too heavy or light) and they also gave you a real killer belachan (Malay for dried shrimp paste) sauce to go with it. My only complaint was the prawns were too small and they added fish balls in the laksa. I don't think I have ever eaten fishballs in laksa before but the lady serving us claimed that this is what the Sarawakians now add. 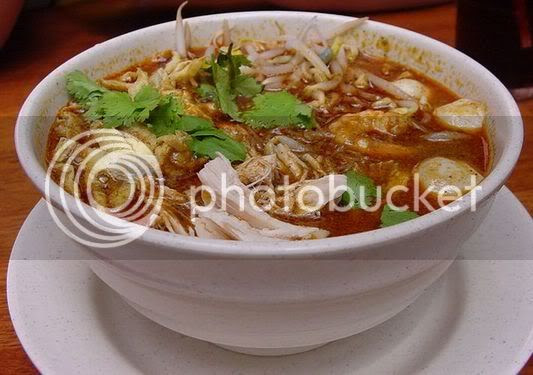 Splashie Boy had the Foochow Fried Noodles which was served in a small wok. The yellow noodles are fried first before cooking them in the gravy. Kinda reminds me of a Hailam Mee dish. The noodles were okay but I am sure it does not taste as nice as the ones served in Sarawak. 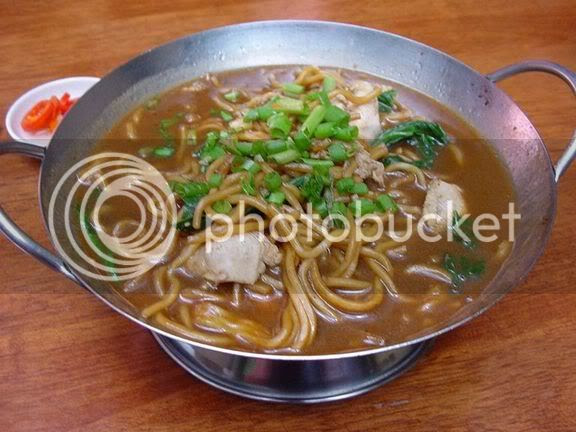 They have all these fantastic stuff at the place like this staircase leading to the Tourist Centre. It's a twenty feet traditional longhouse stairway which is made from a huge log. Next to it is a beautifully decorated wall made from pebble wash and stones with water cascading down it. (Mr. D and Ms. P should consider this for their courtyard home!) 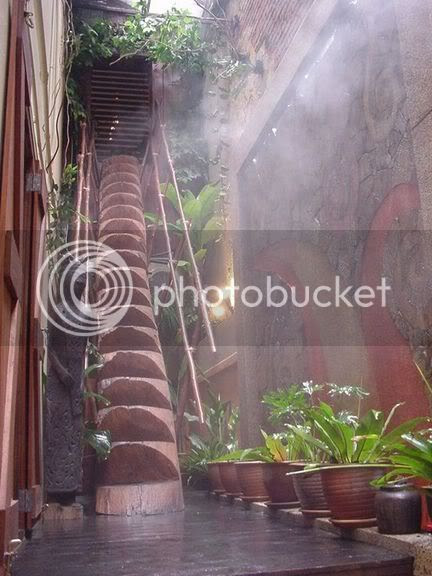 I quite like this place...very UNIQUE!!! Is this place new? I have not seen this restaurant when I was at BB few months back.

emotionalistic - it seems they opened only about three months ago. When you're in the area, have a looksee.

Apparently some of our Kuching friends told us that they are some stalls that serve the laksa with fish balls and sometimes even fish cake.