I have been lucky that I have travelled to almost everywhere in Malaysia for work and holidays but two states that I have yet to visit are Sarawak and Perlis. Not sure why but I am totally fascinated with Sarawak since I have not been there. I guess it's because I love the food they have there especially their laksa (More on that in later postings). So when Flavours did a feature on Sarawak food, I was so happy that I decided to try this interesting combination of adding tomato sauce to their fried kuay teow (rice noodles) dish.

Splashie Boy and I like the normal Cantonese Fried Kuay Teow, fried kuay teow with an eggy gravy and chicken shreds with mixed seafood. The Tomato Kuay Teow is just like the Cantonese Fried Version except they add some tomato sauce. I omitted some ingredients as I cooked up whatever I had in my fridge which meant no choy sum and squid while I replaced the iceberg lettuce with some baby butterhead lettuce. The recipe called for tomato sauce and I added tomato ketchup which was what I had in my larder. Thinking back now, I think I should have added tomato puree or some whizzed up tomatoes instead which will give more flavour to the noodles. The verdict after testing the food was the noodles were nice and kinda unusual with the tomato sauce. As I added ketchup, the tomato flavour was not too strong and complemented the noodles quite well. Looks like I will just have to be contented with my version on this pending my visit to Sarawak to sample the real thing.

Combine the kuay teow with the soya sauces and the oil. Mix well. You can drain the oil from the kuay teow by leaving it in a sieve for a short while when you're slicing the other ingredients up. Over high heat, fry the kuay teow for about two minutes. Dish out and place on a serving dish.

In a wok, bring the chicken stock to boil. Add the prawns, squid, chicken, choy sum and tomato sauce. Bring back to the boil and add the cornflour mixture. Mix well and when the mixture thickens, season to taste with salt and pepper. Add the egg and stir to break it slightly. Pour gravy over the fried kway teow and garnish with shredded lettuce. 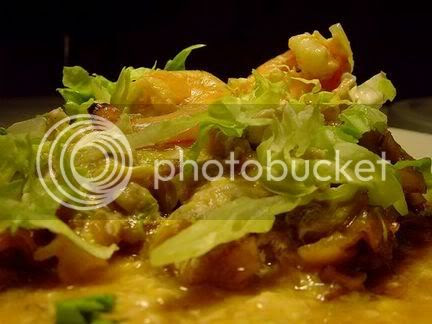