Recently, Splashie Boy and I went looking for food at Hartamas Shopping Centre, which had it's grand opening last month. The place is pretty quiet during the weekday and although it has quite a fair bit of restaurants, nothing took our fancy that night so we wandered out to the neighbouring Plaza Damas. Since we were new to the area in terms of eating (I had only been to the area to check out the numerous dance studios, kickboxing, yoga centers), we applied the universal rule of "if the crowd is there, the food must be good" theory.

Hence, we wandered to this place called Warung Aji-Don Alley which was jam packed with people sitting outside on wooden benches. The place has a few stalls selling a variety of food that ranges from Johor Laksa, rojak, waffles, murtabak, mee rebus and etc. I was fascinated about this stall that sold something called Kachang Pol. The owner advised me that it was Malaysia's chili con carne so we ordered a bowl of it. It came with a thick slice of buttered toast, a fried egg on top with a sliced calamansi lime and loads of chopped green chillies for the added fire. The Kachang Pol was simply yum and Splashie Boy polished the whole bowl claiming it as his. A quick peek at my Foodsters' Guide from FriedChillies.com, indicate that the Kachang Pol is prepared by grinding the nuts (not sure what kind of nuts though). Then a mixture of spices like cuimin seeds, chopped onions, chopped garlic, curry powder, herbs and pepper are fried in a pan until fragrant. Then the grinded nuts are added to the mixture and finally the ground beef. Sounds easy but I bet there must be some secret ingredient in it to make it so yummy. 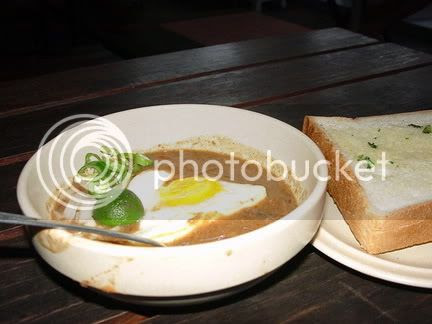 We also ordered Mee Rebus from the same stall. Not too bad as it was not too rich. Foodsters' Guide describes the gravy to be made from flour, peanuts, dash of vinegar and soya sauce. They also serve a special Mee Rebus during the weekends. 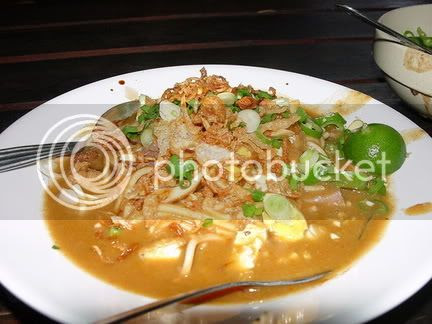 As the Kachang Pol was such a small portion, we added an order of Murtabak, a stuffed pancake that is famous in Malaysia. The stall owner calls his version a Moontarbuck and it tasted yummy, not too oily and crispy. 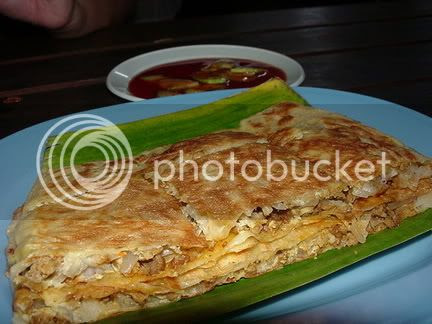 Foodsters' Guide describes a place called Tsya's at Block C at Plaza Damas for the Mee Rebus, Kachang Pol and murtabak. Had a quick look at Block C (the place is a bit of a maze) and there is no Tsya's there, only a mamak restaurant so I am not sure if that place closed down and the stalls came to this Warung Aji-Don Alley at Block E. Maybe someone can enlighten me on the little mystery. These Johor stalls remind me of this little shack at Desa Sri Hartamas which used to operate opposite Devi's Corner but had also closed down. The place was also packed with stalls selling Johor food as we met Ms. P's parents there once telling us the murtabak is how the Johoreans do it. Maybe those stalls migrated to this place since the murtabak tastes quite similar. Well, whatever their origins are, I will definitely make another trip here to eat the Kachang Pol and probably test out the Johor Laksa and other stuff here.