Gosh, not sure what is wrong with this month since I have had such a string of bad luck especially with my computer. Last week, the modem went bust so I had to go round to Clickers to get it replaced. Considering it has served me for almost three years, I guess it was time for it to expire to computer heaven. Once the dust settled with the installation of my new modem by Splashie Boy, I was super happy as it felt faster and better. Then before I knew what happened, my internet connectivity died on me. I tried everything; change cable, use the USB port rather than connecting direct and tested my new modem with other computers but nope, nothing worked. So I reported the matter to Streamyx and luckily they fixed it quickly so I am back on line today. Hopefully that is the end of my bad luck for this month as I don't think I would like to get out of bed if that is just the tip of the iceberg.

Okay, so back to posting entries as they seem to be piling up in a stack in my virtual inbox. After making Loh Hon Chai that day, I had lots of leftover black fungus and dried lily bulbs in my fridge so I thought I'll make another dish from my childhood days. My mother had a variety of steamed dishes that she used to make for us and this was one of them, steamed chicken with black fungus, dried lily bulbs and red dates.

Using the same principles of the Loh Hon Chai, all you need to do is assemble your dried ingredients of the black fungus, red dates and dried lily bulbs and soak them for a few hours. Remove the hard bits and tie up the lily bulbs in a knot. According to my mother, it tastes nicer if you knot them. For the chicken, all I did was remove the skin from one chicken leg and cut them in smaller pieces. Toss it in a mixture of oyster sauce, dash of soya sauce and shaoxing wine with some cornstarch. Cornstarch is important as it helps prevent excess liquid in your steamed dish. Shred some young ginger and pile them on top and steam for about eight to ten minutes over medium heat. 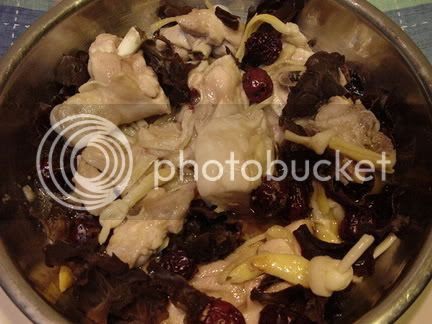