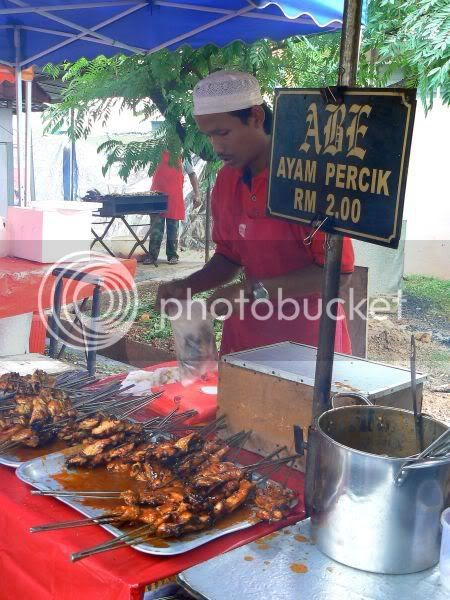 During the weekend, we managed to hit one more new Ramadan Bazaar place i.e. at Wangsa Maju. It's relatively easy to spot these stalls as they're just near the LRT station and on the way to Alpha Angle shopping centre which houses Jusco.
On another note, we did a quick re-visit to Kelana Jaya last night and noticed that the Kek Batik stall is there at the corner. Didn't see any Caramel Pudding though but they were selling Kek Batik like hotcakes. Strangely enough the ladies who sold the Lap Chup that day I was there had dissapeared. Not sure if it is due to lack of license or something else. Also tried the Kuih Denderam and boy, it is very good stuff! When we were there, it was super late hence he was busy frying fresh batches and it was crunchy and sweet. Yum! They are so addictive especially since he was selling them at RM1 for 10 small pieces. Saw these girls queueing up a few times to get the kuih. I satisfied my Laksam cravings at my favourite stall and business was definitely good for some stalls as they were already packing up even though there were loads of people around. 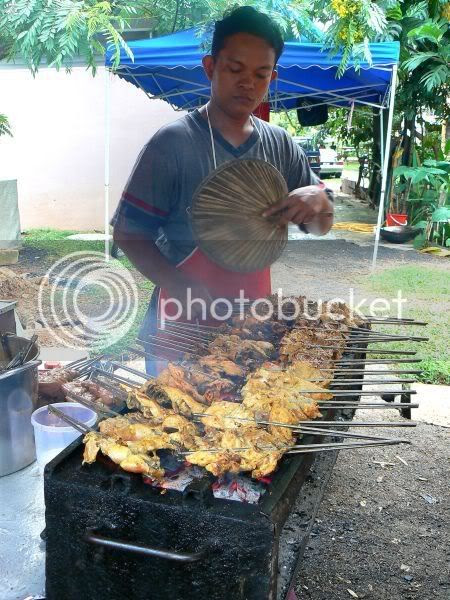 Back to Wangsa Maju and this particular Ayam Percik stall was doing booming business. Couple of pointers in figuring out which stalls are good is always a long queue in front of it. Plus the food must look tasty too. This stall had a long queue of patient people waiting for their food. 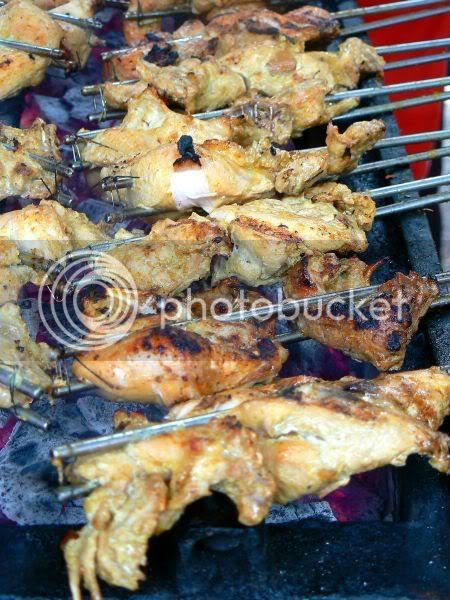 One fella will be grilling the chicken pieces on a charcoal fire while another was manning the stall. 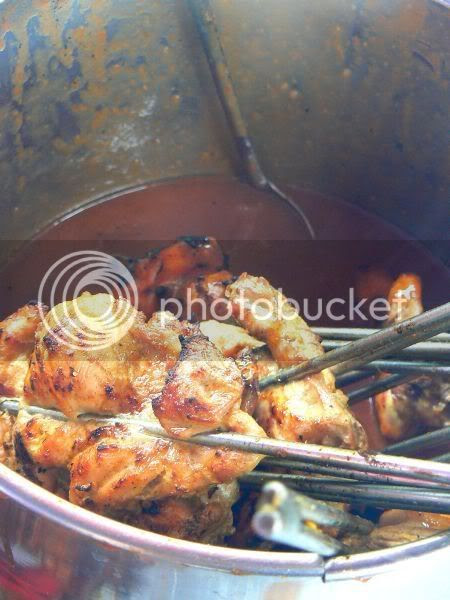 Once the chicken pieces were grilled, they'll dip it in a sauce made from chilies to coat the grilled chicken pieces. The traditional Kelantanese way will be to add coconut milk to cool down the chicken but the local style or what they term as the West Coast style is to add a sweetish but slightly spicy sauce. 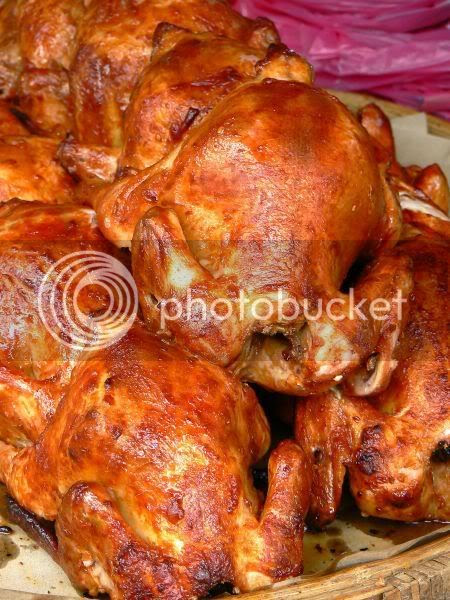 I had a hard time resisting these gorgeous looking chooks. These ones just came out straight from the oven and looked irrestible. Instead of an open grill, they were cooking the chickens in a glass oven. 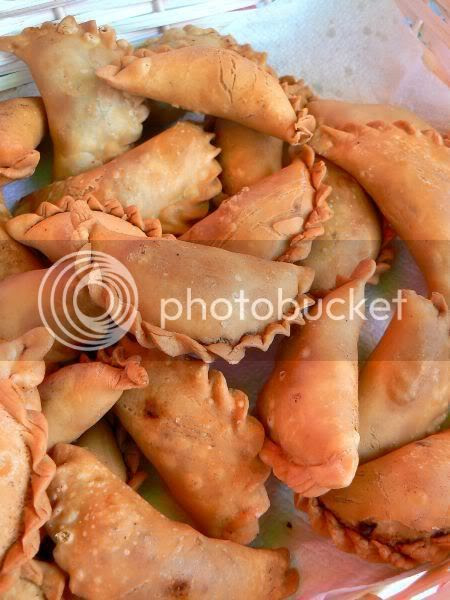 We bought some of these curry puffs to taste as they had the unusual filling of chicken and mushrooms. Very tasty stuff and the filling kinda reminds one of a chicken and mushroom pie. If you're looking for this stall, they're called D'Tanjung. Only problem is they're not too cheap. 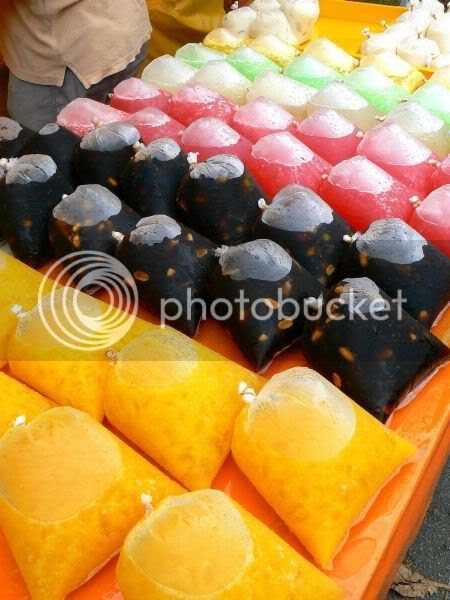 I had fun snapping pictures of the multi-coloured drinks. Usually they pre-pack the drinks to make it easier for everyone to just pick something. 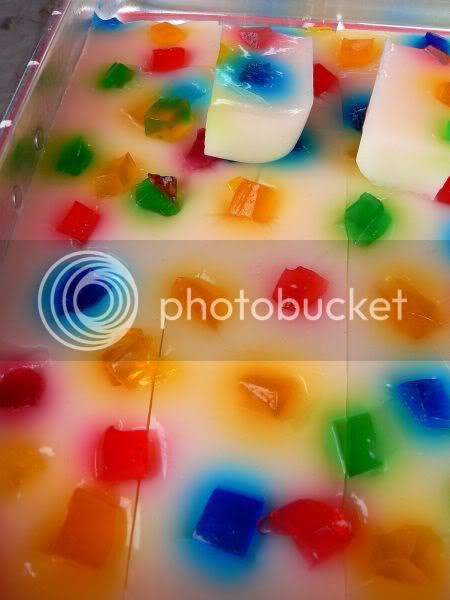 I can never resist colourful agar-agar and this stall had outdid themselves with their creation. Rainbow jelly pieces were mixed with a white coloured agar-agar probably made with coconut milk. Really pretty like jewels. 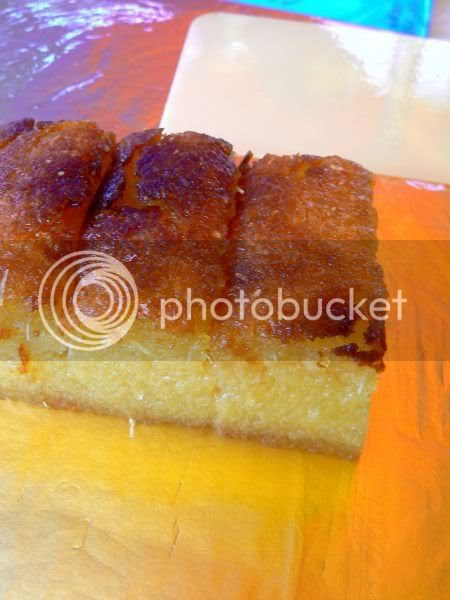 I kinda went crazy for this lady's kuihs. She's a first timer at the Ramadan bazaar and I guess the people know a good thing as her stuff was selling so quickly. I was attracted to her Kuih Bingka - very yummy and lots of tapioca. 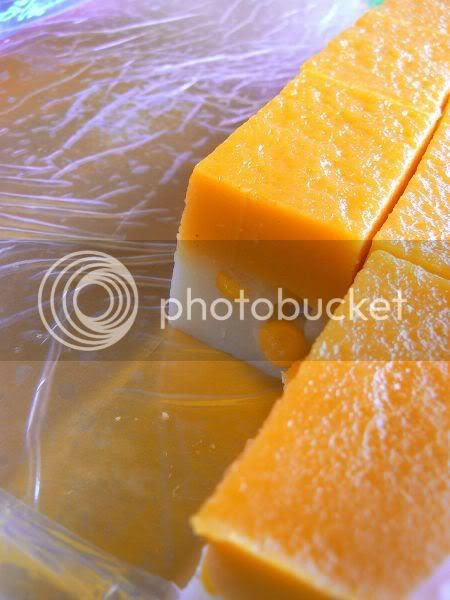 Kuih Jagung was also great with bits of corn inside. My second favourite kuih. 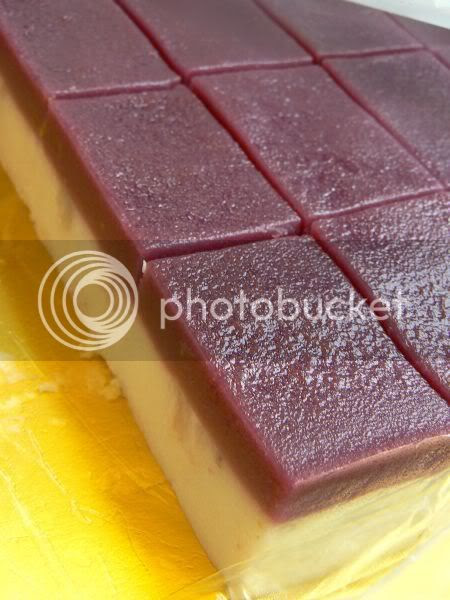 Although the purple colour was gorgeous, tastewise I didn't think much of it as it didn't have much yam taste. 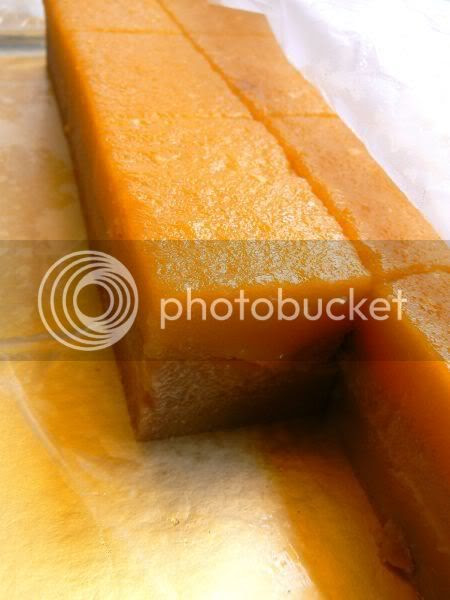 Another favourite was this Kuih Lapis made with a layer of kacang hijau (green beans). Also tried her Seri Muka which tasted pretty normal. If you do visit her stall, get her Kuih Bingka as that's definitely her best seller since it was almost finished when we were there. The prices are also pretty standard at 3 pieces for RM1. 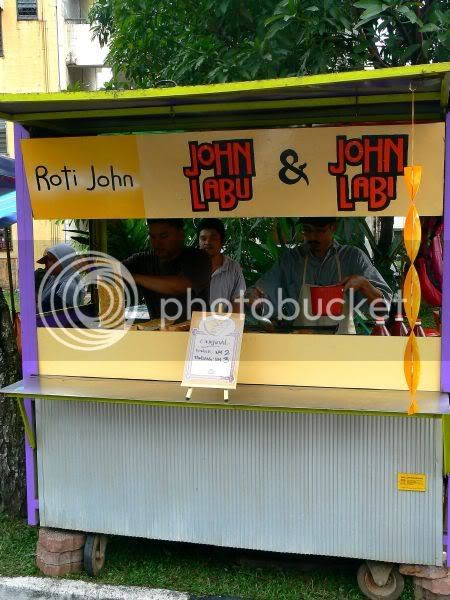 Splashie Boy loved this stall as they had nicknamed their Roti John Labu and Labi. I liked how they decorated their stall sides with the hanging plastic. 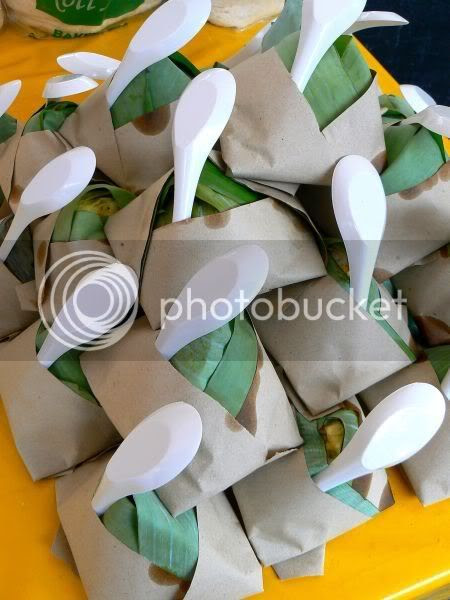 Such an adorable picture of nasi lemak packets with plastic spoons stuffed inside it. 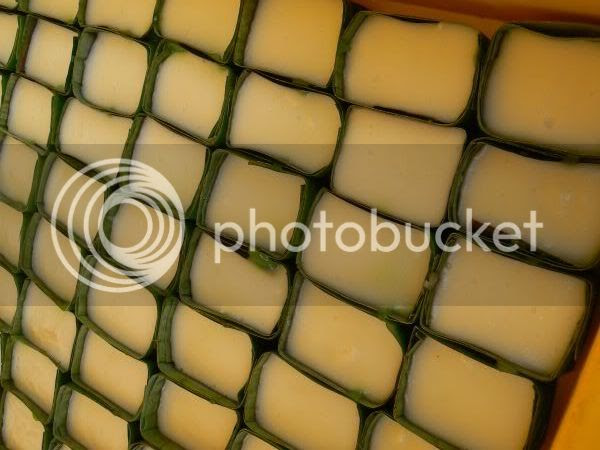 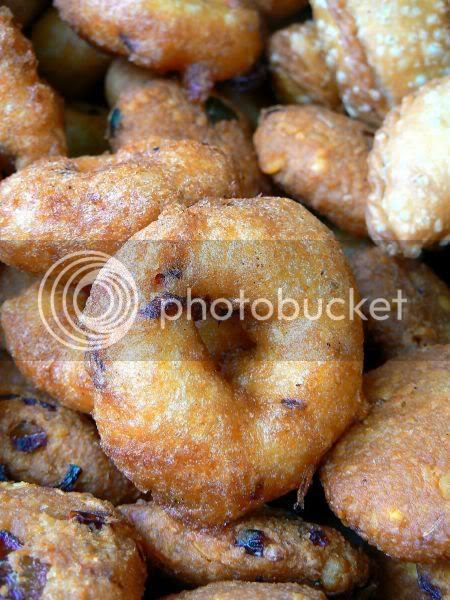 I was quite surprised to see an Indian stall selling Vadai in the midst of all the Malay stalls. They looked good and would have made a great snack.
Ramadan Bazaar
Section 1, Wangsa Maju
Kuala Lumpur
(Stalls start from Alpha Angle to the LRT Station. It's in front of low rise flats. To get here from the Wangsa Maju LRT Station, cross the road and walk towards the flats. The stalls will be at the side of the road until Alpha Angle shopping centre.)
Tagged with: Malaysian Food + Ramadan
Posted by boo_licious at 1:40 AM

Your images of the food are brilliant. I can almost smell the food.

junkgirl - too bad we don't have those touch screens which emit smells and it'll just be like the bazaar.

boo_licious - yeah, that would be good.
Just wondering, were the 'bosses' happy to let you take close-ups of their products or did you have to buy something from each of them in order to take the photos?

junkgirl - they're happy abt pix taking as they know it means publicity from them. Just ask politely and they don't usually object. No bosses here as these stall owners are usually one man shows.

been awhile since I've commented here, though I read your posts on RSS... *grin*

first time I'm missing Ramadhan markets in a very long while (the last time was when I was studying abroad more than 10 years ago). your photos look yummy. I miss the tapioca cake!

hiya May! Awww, u poor thing but never mind u can get to try some when you come back. I love that tapioca cake too. Take care.

Boo, my Hubby now reads your blog too leh and so captivated with all your posts on the ramadan bazaar till he actually suggested we go tomorrow to get some yummies back for dinner. Hahaha..but by the time he finish reach home from work, people buka puasa oledi..don't think much left to buy.

i think I wouldn't know where to start if I'm there. The agar agar looks so pretty.. and the huge selection of kuehs!

yay! Just read your review and I know which place I would prefer to buy the buka puasa goodies.

wow...i stumbled onto ur page, and i have to say ur pictures tests my keimanan. ;)

not being back in m'sia is making me miss all the happenings at them bazaars.

thanks for sharing these beautiful2 pictures.and as much as i might regret saying this; keep 'em coming!! :)

all the pics are nicely captured n very "into my face" now. all the kuih look absolutely tasty! if only i can take them out of the pic...=(

Rasa Malaysia suggested ur blog to me when i told her tht i didn kno wht to cook for buka puasa. now instead of having ideas, im drooling and crying looking at all those yummylicious goodies. sigh....

cat cat - I got so many varieties as they looked so good!

precious pea - yeah, you must be early or else sure the good stuff finish quickly. Go during weekends and zoom in on what you like.

teckiee - which one? the one nearest to yr hse?

shasha - glad to bring a slice of home for you. Bit painful on the tummy but worth it once a year.

joe - thumbs up to the kuih! Well worth the RM1 spent.

ironeaters - don't we all wish! Too bad no link straight to the kuih to ask for delivery online straightaway to yr hungry tummy.

tummythoz - this is the same place? I'm kinda lost abt this place hence my reference pt was Alpha Angle and Wangsa Maju LRT station. Saw lots of students at the bazaar.

princessjournals - aiks! sorry for causing you to cry. Never mind, am sure you can cook up something fantastic for buka puasa.

Still haven't got my Ramadhan fix yet!

boo_licious, no not the same.

wmw - quick quick as some stalls pack up early if they make their monies!