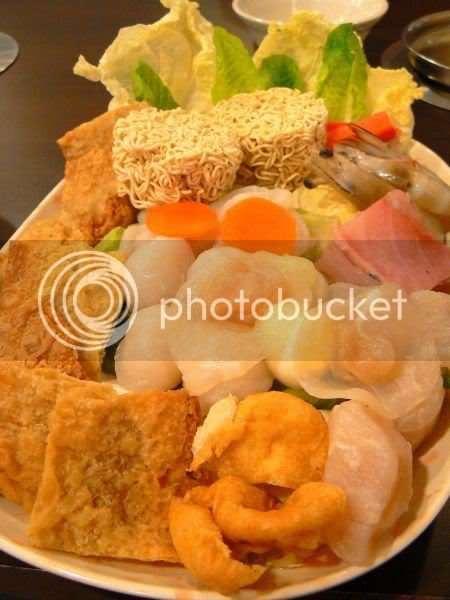 A thousand apologies to the Ramadan Bazaar fans but I didn't manage to make it in time for the stalls. By the time, I was available it was already 6 plus which meant almost empty stalls and people packing up to break fast hence I decided to give it a miss. Don't worry as I'll continue the series when I get to the bazaars this weekend. Since we were around the Ikano Power Centre/Tesco/the Curve area, I was curious to try the Ikea Ramadan Buffet. Unfortunately we were too late and it looked super packed. 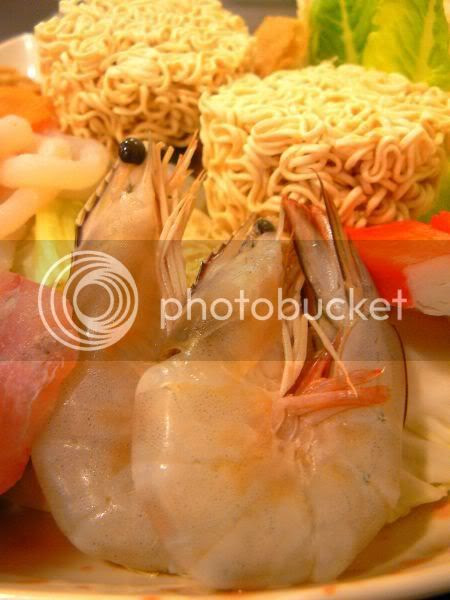 Eventually we ended up having steamboat which was a change from our usual dinner plans. This new place which took over Ben's Cafe had a pretty good dinner crowd. Here, you get your individual hob and soup to cook whatever you like. Great for those fussy eaters who hate people touching their food and especially if you want something different. 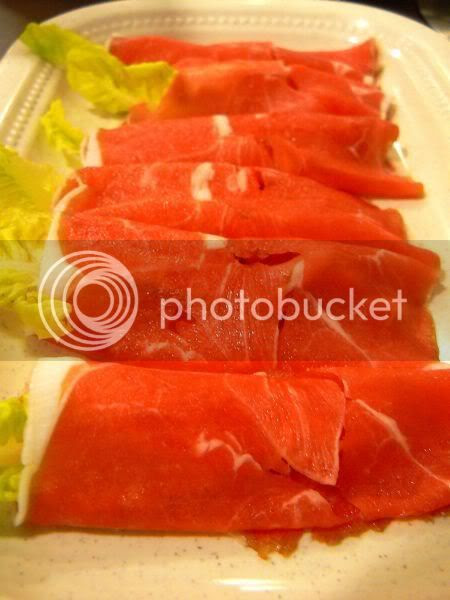 As usual, whenever you mention steamboat the name Pulau Ketam or in this case Ketam Island pops up since it's synonymous with fresh seafood and fish products. The menu has sets for singles and doubles. We decided to have the Double Combo Value Set (RM29.80+) to share between the both of us. It came with prawns, fishballs, various types of fish wrapped in vegetables, fish noodles, foo chuk, quail eggs, fish slices, crabsticks, noodles which resemble the instant type, chinese lettuce and romaine lettuce. 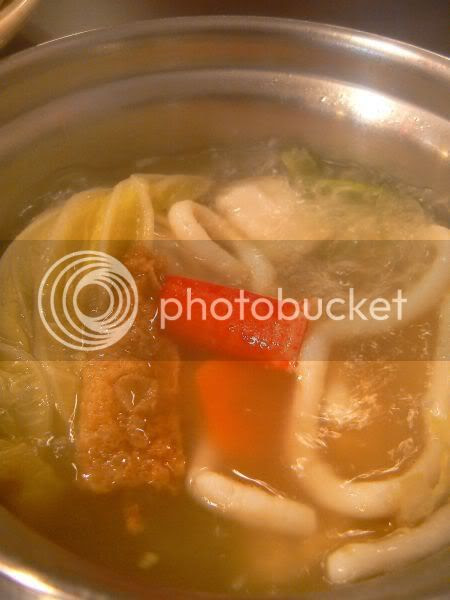 There's three types of soups - clear, tomyum and curry available but we both choose the clear soup. The soup's taste was not as fragrant as others I have tried before but I quite liked it as it didn't have any or little MSG. After boiling lots of the items, it became nice and sweet. We also added an extra order of lamb slices (RM6) for Splashie Boy. I didn't quite like it though as the smell of the lamb was quite strong. He happily finished it all up by swishing the paper thin slices in the boiling soup like shabu-shabu. 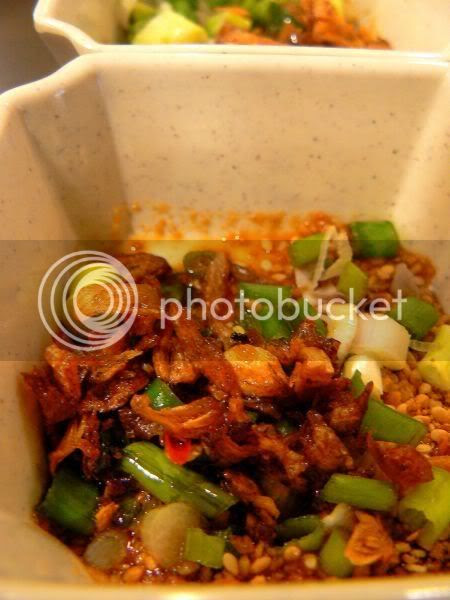 Dips and sauces are the utmost importance to steamboat to give it extra flavour. Here they serve you this dip made from sesame seeds, chopped spring onions, deep fried shallots, chopped green chili padi and I think some soy sauce mixed with oil. Although it did add flavour to my soup, it was only just a hint versus a burst of flavour I expected. Maybe it would have been better if more shallot oil was added since it was quite dry. 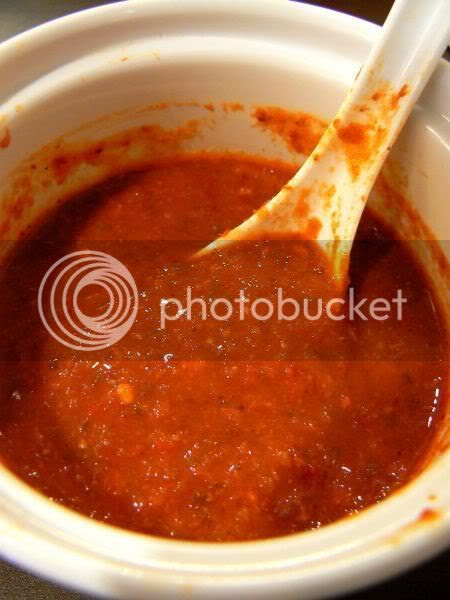 On the side, there's two types of chili sauces for you to choose from - red and green. The red one tasted pretty good and was quite mild while the green chili sauce which resembled a paste was very hot on the tongue. There's also shallot oil for those who like to add a bit to give their steamboat flavour. 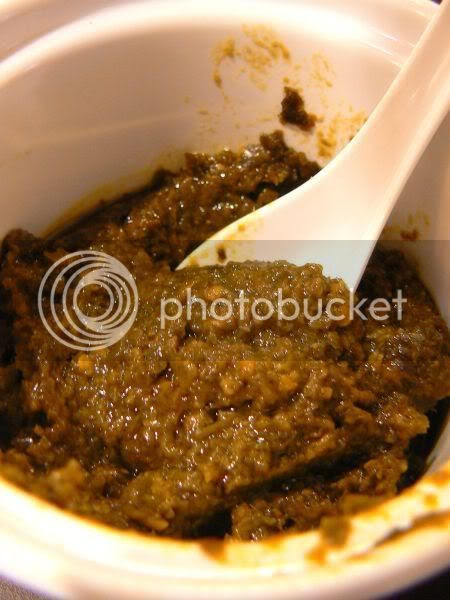 Tastewise, every thing tasted quite fresh and the clear soup tasted good after adding lots of vegetables and the seafood. I would not say this is the best steamboat around town but it does offer a budget alternative for those who are shopping at the mall. The menu has a number of individual noodle options for about RM9.80 to RM13.80 where they mix noodles with items like lamb, beef, mushrooms, dumplings and etc. Basically it's like you ordering a bowl of noodles at a cafe filled with noodles and topped with vegetables and your choice of meat. Only exception here is you get to cook it yourself.
Ketam Village Steamboat
Lower Ground Floor
Ikano Power Centre
Mutiara Damansara
Petaling Jaya
(Halal. The restaurant is at the lower level which opens up to P1 parking at Ikano Power Centre. Same level as Mama Sayang, Q Jelly and Uncle Lim's. It looks like a branch from Bandar Menjalara as there are newspaper clippings which refer to a steamboat restaurant there.)
*Disclaimer: The opinions expressed here is entirely based on my personal tastebuds and may vary for others. The reviewer also declares that she has not received any monetary or non-monetary compensation from the restaurant for writing this review.

Tagged with: Malaysian Food + Steamboat
Other reviews:
Posted by boo_licious at 8:45 AM

the plates, the dipping sauce and the settings is very similar to mizi shabu shabu at puchong, wonder if it is under the same owner?

good range of food and the price seems reasonable too!

can i copy ur picture? food at big plate shah alam.

Ahh! My fave place at the moment...cos of the non fish selection! :o)

I like the black shrimp mix thing that comes with the beef. I think they chillies are all quite nice. Will have to take the clear soup the next time i eat there cos the Tom Yam killed my tasted buds.

the sauce looks good, you're right, sauce is the main factor of a steamboat.

BBO - it tastes ok for me as I've had better but if you're stuck for choice in Ikano, it's a good alternative.

Kampungboycitygal - don't think so as there are references to a Bandar Menjalara place but who knows as these steamboat places could all be the same.

daphne - the food here is not bad, pretty reasonable for that price range.

tulip - do link me pls so I can also see. Thxs.

wmw - Ah, that's true since they also give meat cuts.

teckiee - ooh, we didn't get that since we ordered lamb vs beef.

alam setia - good choice when u want something piping hot at the mall.

NKOTB - yup, had some lethal ones before which are the owners' own concoctions.

Hey,I got to recommand a good place for u and your friends.
~Chen Chenho Pulau Ketam Seafood Steamboat @ KLANG
You may drop by to have a try.
For further info , you may visit www.xanga.com/chenchenho

hope to you you here.
have a nice day.

absolute tasty .. i love this place