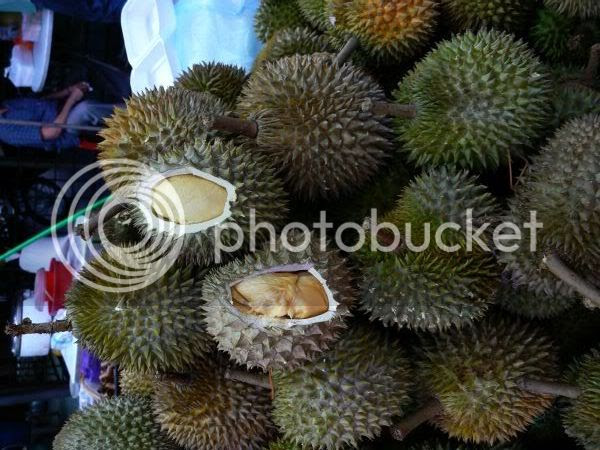 When I found out that the next SHF hosted by alpineberry was all about the tropical paradise, I knew I could not miss it for the world. I've been itching to test out a recipe from the new At Home with Amy Beh cookbook - durian pancake. Since the durian is revered as the king of fruits, this thorny fruit should be featured especially since it's in season now.
Usually the durian is eaten just on it's own but there are quite a few desserts and savoury dishes which feature the fruits. The durian pancake rose to notoriety when it was first introduced in Mandarian Oriental Hotel's Chinese restaurant, Lai Poh Heen. It became a must order - a light and thin pancake encased with luscious durian cream and whipped cream. 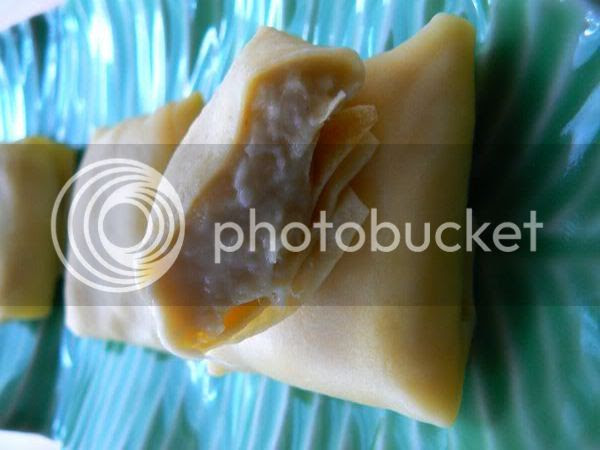 When I first read Amy Beh's recipe for the pancake, I honestly thought they made a typographical error as it only had a small proportion of flour, icing sugar and tapioca flour compared to the eight eggs. Deciding to go ahead since I had made the decision to try it out for SHF, I found out that the recipe was correct. Only rant I have with the cookbook is they don't state the number of servings the recipe makes - kinda difficult to determine if I needed to halve the recipe.

I made slight adjustments here like - sieving the batter and beaten egg mixture to remove any unbeaten egg whites. For my version, I didn't use any whipped cream since I felt it was rich enough on it's own. Like all new recipes, this one needs perfecting as I couldn't get my pancakes to be wafer thin like the restaurant's version. Sigh! Now I know why I should pay RM5 for each small pancake as the person making it is the real expert. Although mine was not perfect, it still tasted pretty good. You need to eat them slowly as they're so rich. Unfortunately Splashie Boy refused to come near it since he absolutely hates durians. 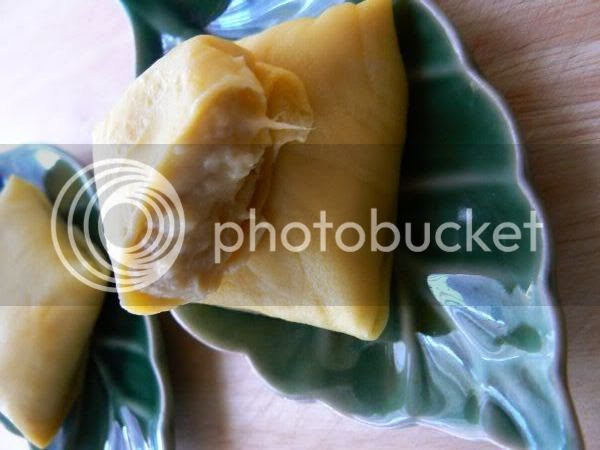 Durian Pancakes (Adapted from At Home with Amy Beh 3)

To make the pancake wrapper: sift the icing sugar, tapioca flour and plain flour into a mixing bowl. Melt the butter and cool it down before mixing it in the dry ingredients. Beat the eggs and sieve it into the mixture. Add the water and mix everything together till smooth. Heat up a 15-16 cm non stick frying pan. Pour the batter. Swirl the pan around until it is evenly coated and pour back any excess. Remember the pan has to be hot or else the batter will not stick. Note that no oil is needed as melted butter has been added already. Shallow fry over low heat until cooked. When sides of the pancake curl up slight, flip the pancake on to a big plate. It should be wafer thin for the pancakes to taste nice. The batter makes about 20 wrappers.

Spread out the wrapper on a working surface and spoon one tablespoon of the whipped cream and 1/2 tablespoon durian paste on the edge of each wrapper. Wrap into a mini sized parcel. Chill in the refrigerator until cool. Remove and serve immediately.

Oh! I just make durian pancake today...just differ from yours..yours look so nice and tempting...look out mine in my new blog...

That looks absolutely gorgeous! I had never even heard of a durian before. Now, I must, MUST get one to try your recipe.

it looks great!
and i think i'll enjoy your pancakes more than MO's.

this may sound weird, but i like pancakes with more 'bite' in them, and i thought the MO pancakes were not 'bitey' enough. hee :)

hi boo - although i'm not a durian fan, i know the rest of my family (who really like durian) would love to try your durian pancakes!

Unfortunately Splashie Boy refused to come near it since he absolutely hates durians.

haha when i dont have RM5 for durian pancake..i can come and find you? yes?? blinks eyes...

Hey that looks pretty darn good to me! Skin doesn't looks like it has a really smooth and firm texture. Maybe would've been less rich with some cream huh? Like LL, I volunteer my eating services!

sweet jasmine - yr pancakes look so good esp with the ice cream. Will give that a try too soon. Thanks for the recipe.

Almost vegetarian - kinda an acquired taste though, durian is kinda stinky so most people don't like it but the Asians love it.

wandernut - ah,mine are beginners' pancakes. Not easy to make thin ones with this batter as it's mainly eggs.

mary - thxs for hosting! and can't wait to read abt the other tropical recipes.

lemongrass - eh, my skills are quite poor unlike the MO's chefs. U sure u want to taste?

joe - no guarantees if you can survive the food tasting though?

paprika - yeah, it could be lightened with the cream. It's so difficult to get it smooth - not sure if it's the fire. Maybe I should not use a gas fire but an electric one. The batter is weird as it's mainly eggs, if u leave it for too long to swirl, it tends to becomes clumps of eggs.

jun - yes, durian season now so must eat lots before it goes away.

oh wow.... must be sinfully creamy and yummy! :D

Aiyoh....looks so good. What happened to the durian party???

ouch its durian everywhere in the flogsphere..hahaha..

hey, i don't mind any food that you cook as long as it's from the heart. hahahaha.

Just had some durian and saw your durian pancakes... oh my... I still taste durian but sure the taxture got to come frommy imagination.

Thanks for the recipe for the pancakes. That looks easy enough to make, and that is rather smart to strain out the big pieces of egg white.

Do does the dessert smell bad like durian fruit? I have never smelled one, but all the USA TV shows about durian always says it smells like rotting farts.

Coming for the durian party next sat?

meiyen - it tastes less rich when u chill it properly.

wmw - no idea abt the party but it's just durian at the stall though.

lemongrass - aww, that's sweet. Will make extra for you the next time I attempt this.

lannae - yeah durians have a very pungent smell so it's not for the fainthearted. Some call it smelly socks but the texture is creamy.

teckiee - is it on? Will have to check if we can as we may have something on that day.

certainly a good idea to turn leftover durians into these babies. yum yum.

Oh Durian! A reason to move to Asia among other things! Plus its Bourdain's favorite fruit. Just wish I could get one in the U.S. Thanks for the idea for the future.

Super recipe . . . I love Durian . . . rare and rather expensive here in San Francisco China town - I've just linked up Your blog on My flickr [ http://flickr.com/rocker/photos ]
Thank's