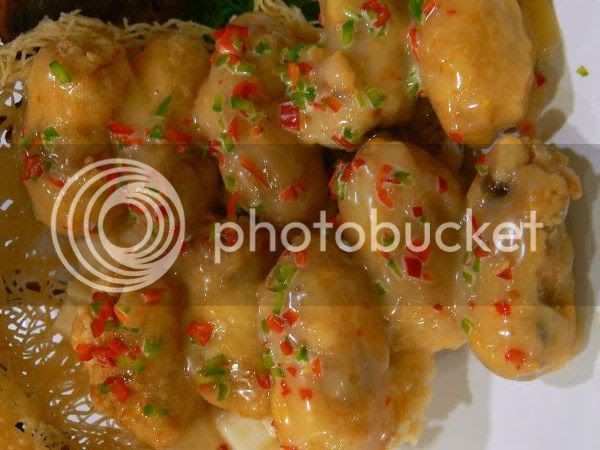 Last week, we (Precious Pea, WMW, Jackson Kah, Tummythoz and Tankiasu) did quite a bit of feasting at King Crab. It seems this place now has it's little fan club as quite a few floggers have dined here and liked the food. The president of the fan club of King Crab has to be Precious Pea as she is a devout fan of the place chalking up the most visits compared to all of us. She did the ordering hence I'm kinda at a loss on the names of some of the dishes. This particular dish was made with pomfret fish hence it was quite pricey (RM50++). Each roll was filled with fish meat, chinese mushroom and vegetables. Drizzled with a creamy sauce and sprinkled with chopped red chilies and green spring onions, it was a pretty good dish. It's served with the fried pomfret that has been deboned. The fried fish is edible especially if you're the type who love crunching on deep fried fish bones or the fish head. 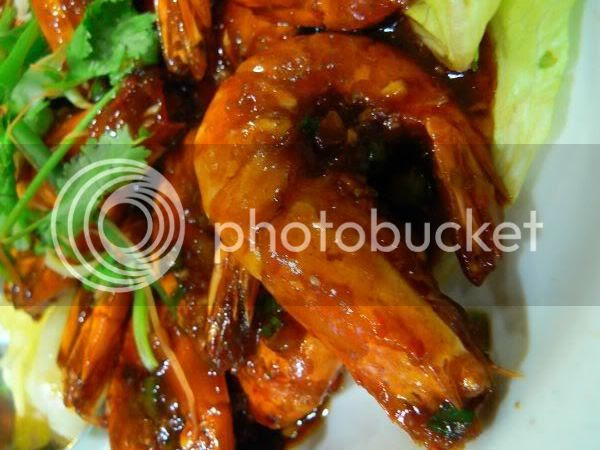 Another dish which I have no idea what the name is but it looked like prawns in a sweetish black sauce kinda like har lok. Prawns weren't very big but the meat was fresh and firm. 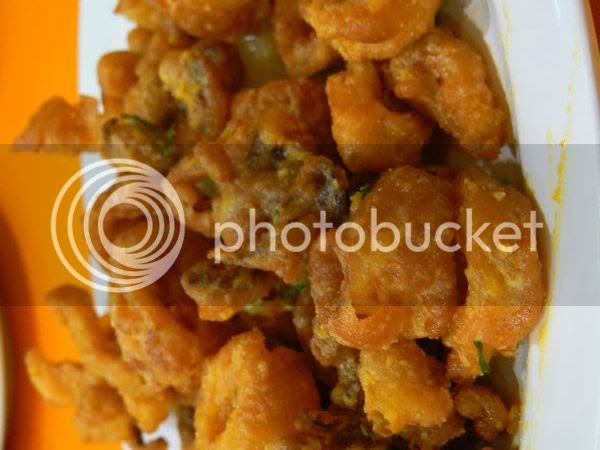 Before I came to the restaurant, my friend had SMSed me and told me a must order is their salted egg yolk sotong. I admit this was really good - crunchy sotong with the salted egg yolk sauce. Not too much as it was a mere coating which is a great idea hence it was not too salty. 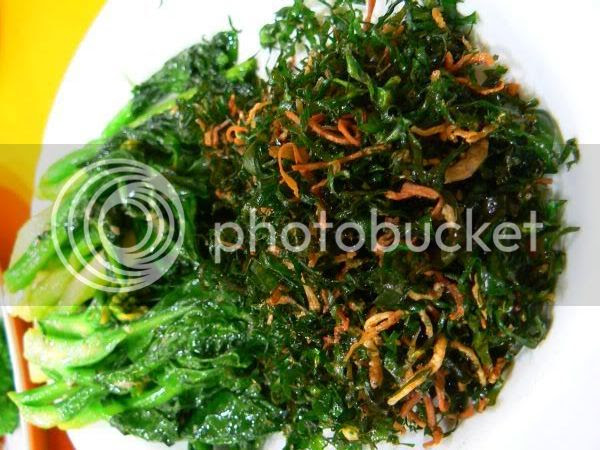 For vegetables, we had kailan served two ways - the stalks fried in garlic while the leaves are shredded and deep fried. It looks and tastes like seaweed and is delicious with the tiny deep fried ikan bilis. We also ordered the sticky Guiness Stout Pork Ribs (RM15++) which I had featured before. It was also everyone's favourite as the pork ribs were coated in that sweet sticky sauce. Tankiasu even ordered a portion to take home to his parents. I hope they enjoyed it as much as we did. 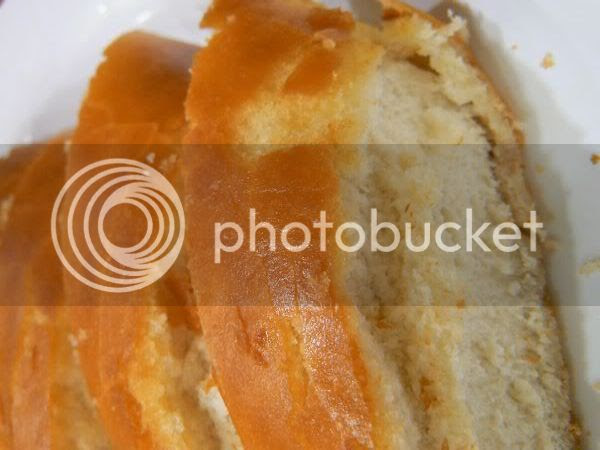 We had two orders of the must have with our butter crabs - the mantou with it's ultra crispy skin. Really great with that buttery sauce especially when you pour it on or just dip it in. 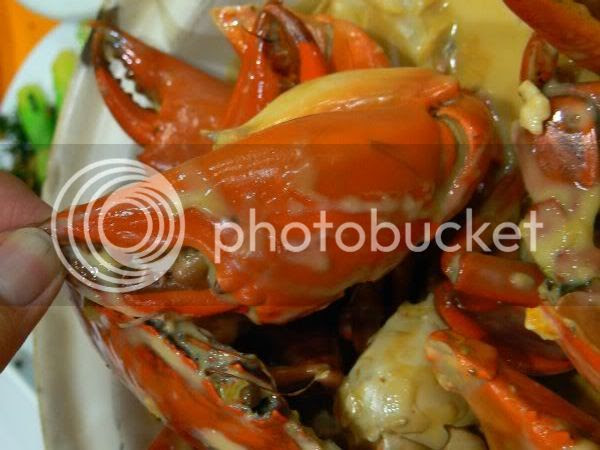 Then it was the butter crabs which was what we were all waiting for. Jackson was kind enough to be my hand model this time round. Look at that yummy crab claw waiting to be eaten. It was excellent stuff and even though Jackson was coughing, he stopped when he was enjoying the crab and the creamy sauce. 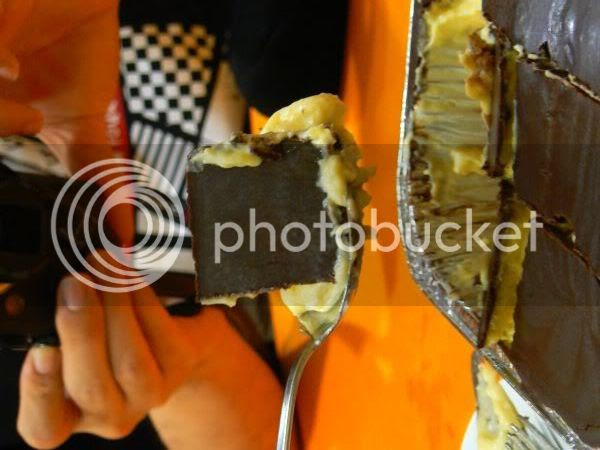 We even had dessert - durian tiramisu courtesy of Fatboybakes. He couldn't join us for dinner but was so sweet to bring us dessert (thanks so much FBB!). With a brandied sponge layer and a wicked tasting durian mascarpone cream topped with a chocolate layer, it was utterly delectable. Even though we were all full to the brim from dinner, most of us had seconds. Note how the durian tiramisu in the picture above was getting all the food paparazzi focusing on it.

It was such a satisfying meal and so reasonably priced as we paid RM38 per person for that wonderful meal. I guess now we have a fan club, we should regularly hold meetings here to sample the food. I'll let the president to decide on the meet up schedule but I do vote for monthly meetings plus a lunch date to sample their new Hong Kong dim sum menu.

(Non Halal. The restaurant is directly opposite the Kelana Jaya LRT Station.)

Disclaimer: The opinions expressed here is entirely based on my personal tastebuds and may vary for others. The reviewer also declares that she has not received any monetary or non-monetary compensation from the restaurant for writing this review.

so envy that you can join with other bloggers to having fun with the yummy food!!

Ahhh...yummy memories! Yes, the next time we eat here, we'll be less busy as we have already taken photos of the dishes (unless we order a whole new range of dishes!). Aaarrrgh....take picture! take picture! LOL...

boo...how come i didnt get an invite?..aiseh missed out so many items..need to go very soon..i cannot tahan the butter crabs..looks so good!

It was such a wonderful dinner, good food with great company!

Boo, if not mistaken, the fish was not wrapped with fried beancurd sheet. The sliced the fish meat and use it to roll the ingredients inside. That is what the waitress described when i ordered. OH YAH..hahaha..thanks for the 'President' title. LOL!

bearyip - will have to ask Madam President if she accepts new members though.

wmw - good idea, we constantly go to one place which we have taken pixs then we can just enjoy the food without the paparazzi.

precious pea - Hello Madam President, so when next trip? Ah, the expert talks. I wasn't sure as I only ate piece.

lemongrass - can go another time, don't worry! Must do regular check ups.

Delicious memories .. ahhh. Other patrons were quite amused with our antics - going around d table trying to capture the preferred angles.
The durian smell & taste .. swoon. Guilty. I had 2 helpings.

And the kailan hor...it's sprinkled with fried cuttlefish that night. But Unique serve it with fried small ikan bilis.

precious pea - Madam President speaks so we will have another round. Hmmm, I wasn't sure if it was cuttlefish or small ikan bilis as I think I ate the remnants of this one. Thanks for the tip.

tankiasu - glad they liked it. Maybe you can bring them here one day so they can also sample the yummy crabs.

during this durian's season, you should travel to Ipoh, where you can enjoy the famous Nasi Ayam Taugeh and lot's of durian!!!!

yes, will definitely join u guys if there's round 2 :) (ya, ya aku tak malu, self invite..mwahahaha!)

So, this is what Tummythoz talking about - King Crab and durian tiramisu!

*cough cough* It was definitely a great dinner! Thx to our president and of course, FBB for bringing us the heavenly good Durian Tiramisu... . Wonder when can we have our 2nd meeting ? Lots of issue to be discuss... Can u ask the our WMW (secretary) to send us the minutes...

Hey, just found your blog! Awesome food and pics! Gonna bookmark you and read up before my trips to KL! :D

great captures of the seafoods! I'm also fascinated with crabs! and butter crabs?? sounds lovely! any other recommendations?

paprika - no problems, will summon you for the next meeting.

effizul - funny you would mention that since I just had the famous Ipoh dish for lunch. Yes, Ipoh is always a good idea since it's good food everywhere.

jackson - pls discuss with the secretary as I don't have locus standi to ask her to issue minutes.

tummythoz - poor jason who only can hear abt it. Never mind next round will include you.

meiyen - condolences abt yr grandmother. Yes, pak chiu har would have been a better choice esp since we had loads of green chili and garlic sauce.

camembru - hope u have fun in KL!

christine - pantai seafood is also not bad, so is lala chong. Lots of choices.

jason - keep the hair on, next round ok?

Wow .... nice recommendation. Think I'll have to try this one next time instead of always going to Pantai Seafood in Kg. Sg. Ara.