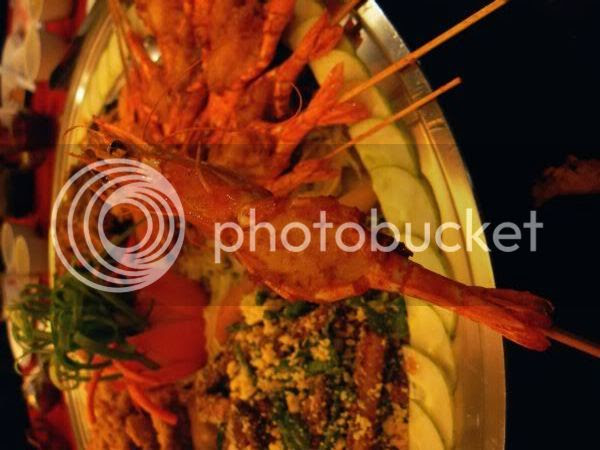 How does one get rid of Monday blues? Well, one way is to drown your sorrows in food which is what I have today - a feast of tummy tickling food in pictorial form. Last week, Jeannie Lee from New Formosa was kind enough to organise a dinner for a few floggers with KampungboyCitygal to sample their offerings. As usual, it was great fun especially when it came to picture taking - imagine a whole table of people jostling for the best shot with their individual cameras! Apologies though as some shots ain't perfect as I'm not too good with low light conditions.
Kicking off the feast was the traditional platter of starters - grilled prawns stuffed with garlic in the foreground, butter unagi, crispy rice puffs and sesame seed fried intestines in the background. The skewered prawns were crispy and sweet that combined well with the garlic. 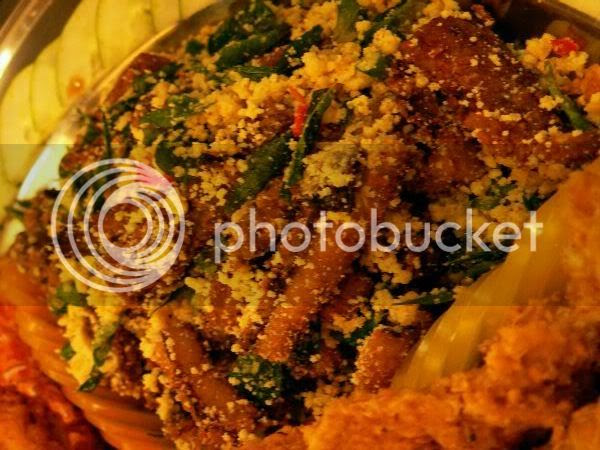 My absolute favourite is the butter unagi (eel) - it is a must have whenever I eat here. It's totally unlike the usual lacy and crispy threads found in other restaurants version of butter prawns. Tossed with curry leaves and chopped bird eye chilies for flavour the crumbs remind me of the flaky but light topping of a crumble. 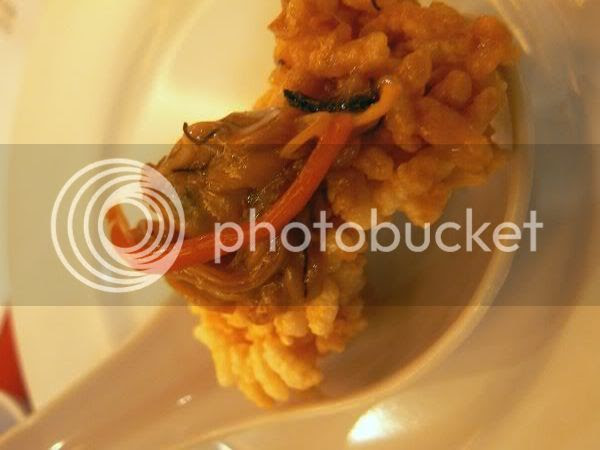 Something unusual I have not tried before - crispy rice crust topped with a mixture of fried enoki mushrooms and clam meat. It's a good combination of crispy with the savoury mushrooms and the rich sauce. 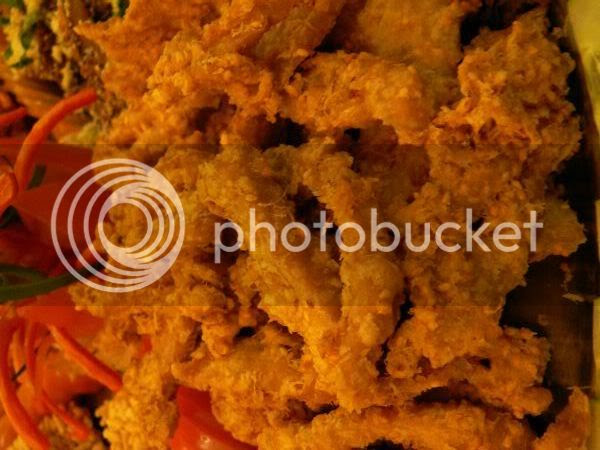 I must admit I was too busy snapping pictures to sample this until much later. This was pretty unusual - sesame seed coated crispy intestines. You would not know it's intestines as the texture is not rubbery but kinda soft. The star of the show was the crispy roast suckling pig which everyone went ooh and aah over it. We even learned a new way to eat it - dipped in white vinegar as shown by Jeannie. It gets rid of the oily taste so you can eat even more pieces. Jackson from Living in Food Heaven gave his thumbs up to this dish! In fact, every one finished this so quickly that you had to be quick to snap a picture of it. 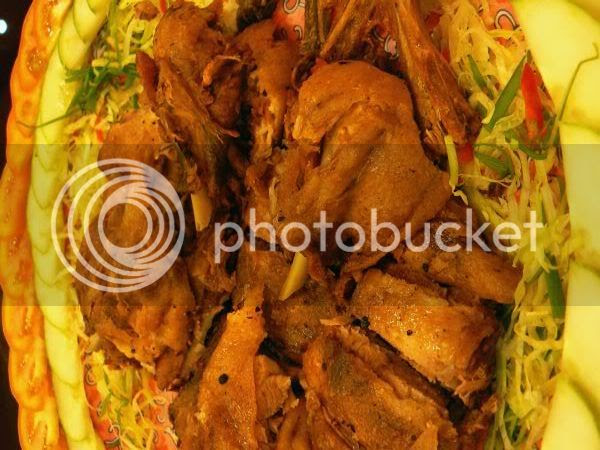 Next we had the duck dishes cooked in two different styles. Although the restaurant is Taiwanese by origin, the owners have also introduced other dishes like this Sichuan Crispy Duck. Not too oily, the duck is crispy with lots of flavour. Kinda reminds me of the crispy duck you get in London Chinese restaurants which is their version of Peking Duck. 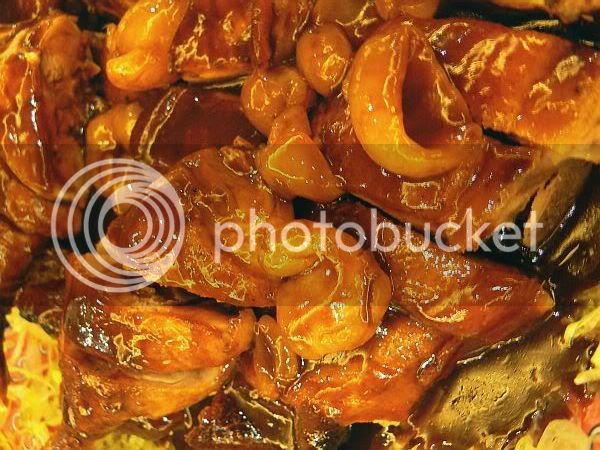 The other duck dish is the Pipa Duck tossed in a Longan sauce. I found this a bit salty and would have preferred the sauce on the side so I could dip into it as and when I wanted a bit more taste. 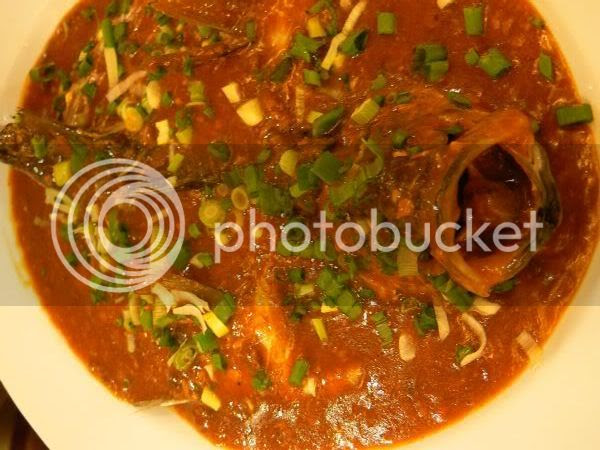 Two fish dishes were next - a whole fish served with a fermented soy bean paste and the fried fish slices. 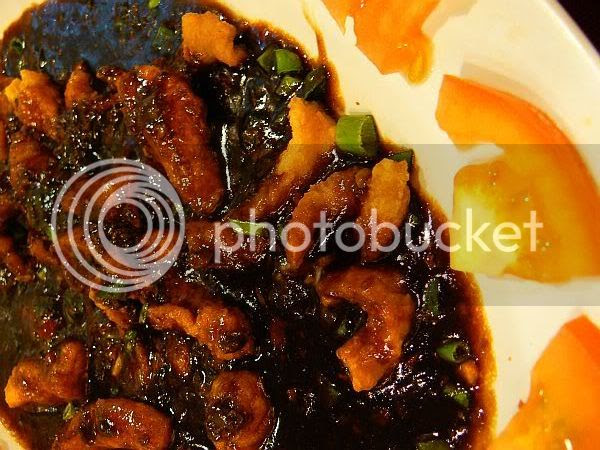 I've eaten the fried turbot fish slices which taste really fresh and delicious with the thickish sauce. It goes really well with fried mantou to mop up the delicious sauce. 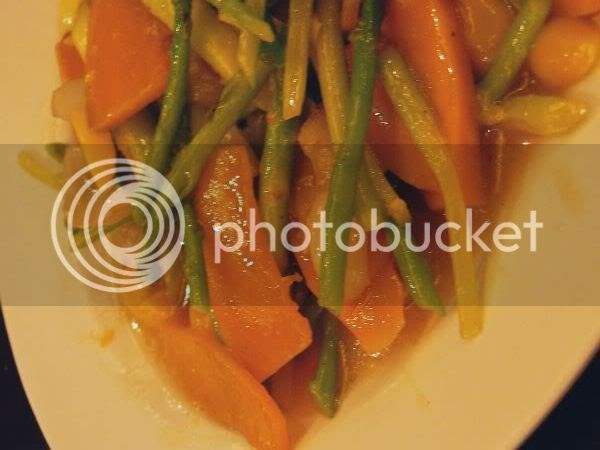 Even the vegetables is an unusual combination of sliced pumpkin, asparagus spears and fresh lily bulbs which was nice. 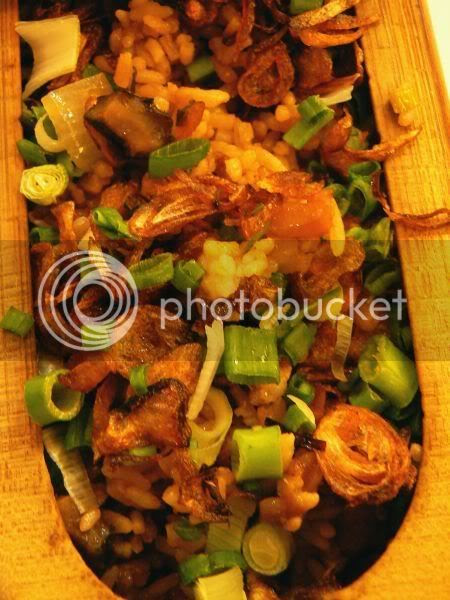 A must have when I dine here is their Bamboo Yam Rice filled with yam cubes, lap cheong and chinese mushrooms. It tastes really good warm and even reheated the next day. 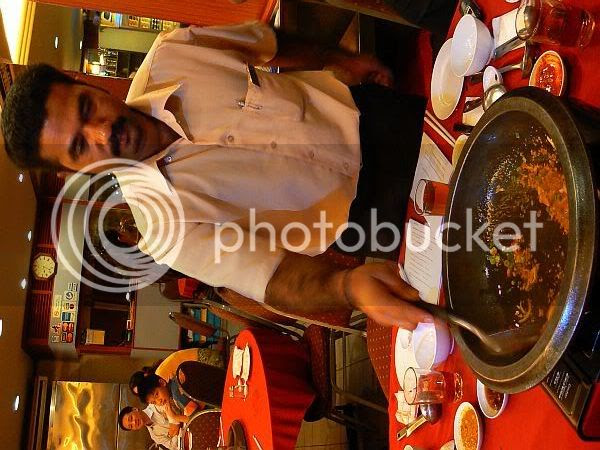 Just when we thought we were reaching the end, we had their famous Formosan Stone Pot and Bonito- MaLa Steamboat. The stone pot is pretty unusual as they fry the chopped onions, garlic, spring onions and chili powder first with a special sauce. 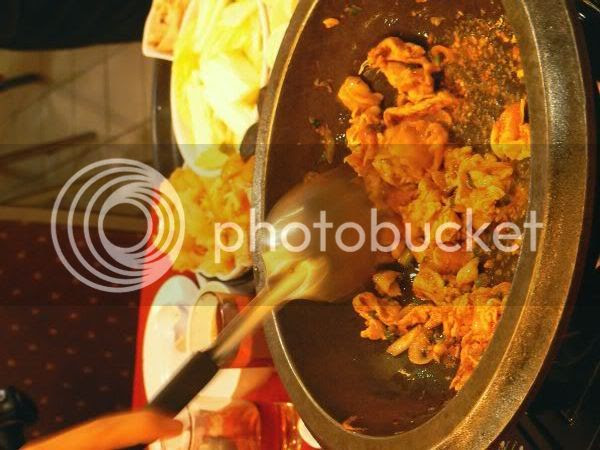 Once fragrant, chicken slices are added and fried together with fresh oysters. When it's cooked, the items are scooped out before adding the soup to the stone pot. 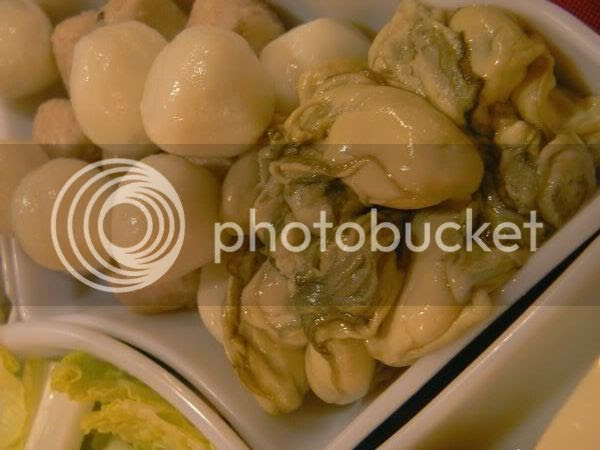 The frying of the items before adding the soup adds additional flavour to the stone pot. More items from a selection of fresh oysters, fishballs, enoki mushrooms, corn on the cob, bean curd sheets, yam, chinese mushrooms, tofu are all added into the soup to cook. 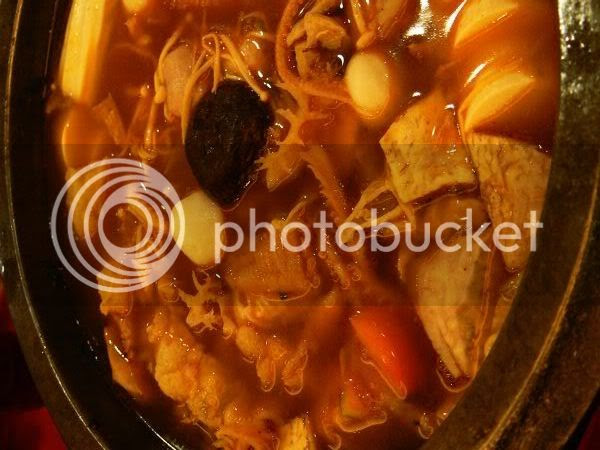 Once everything is cooked, the soup will be boiling and everything will be floating to the top. Be warned though as the MaLa soup is extremely spicy. If you prefer a less spicy alternative go for the Bonito soup made from tuna flakes. We also had a seperate pot of steamboat with the two soups and the same ingredients. 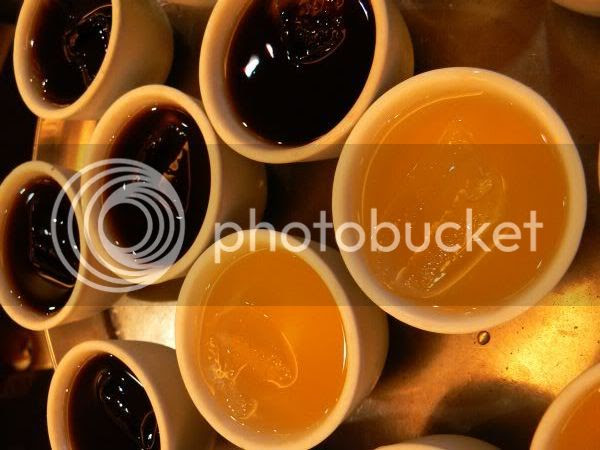 Something to cool down our burning tongues from the MaLa steamboat - their refreshing sour plum and herbal tea drinks. They're home made and taste so good especially the sour plum drink. 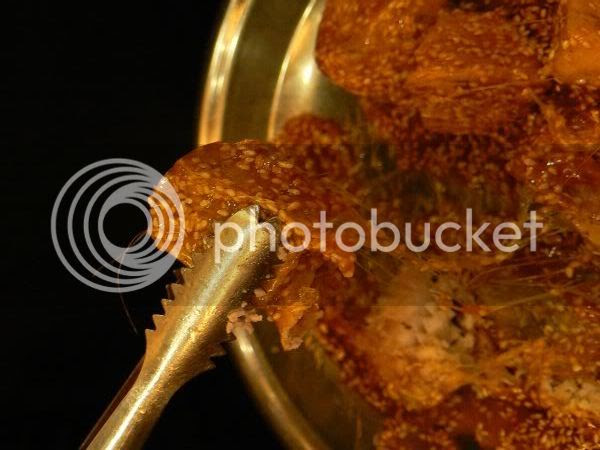 Desserts are also a big thing here and one item you must order is their Candied Yam. A caramel sauce with sesame seeds is prepared whereby steamed yam cubes are tossed and pulled out from the hot sauce as seen above. It's then quickly dipped in cold water for the sauce to harden into a crunchy candy shell. It tastes great especially with the soft yam inside the crunchy shell. 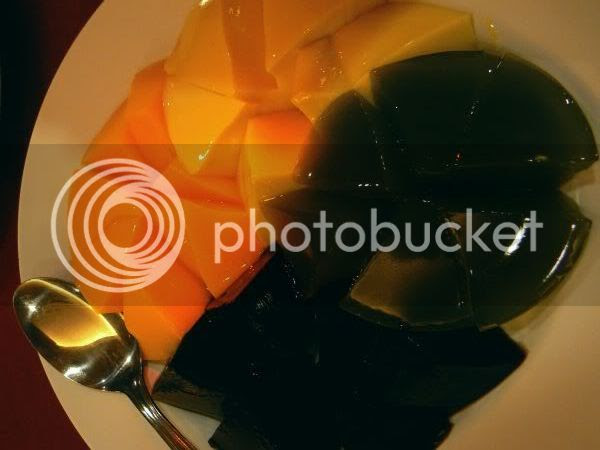 Aside from this, they also serve puddings of assorted flavours - green tea and aloe vera, gui ling guo, mango and my favourite the caramel custard. I absolutely the soft but slightly firm texture of the pudding which is laced with just the right amount of sweet caramel. You can also get these puddings from their dessert kiosks in Giant Shah Alam and Giant Subang Jaya. We also tried their mua chee which is made from glutinous rice flour of different flavours which is tossed in crushed peanuts. They also make this at the dessert kiosks. 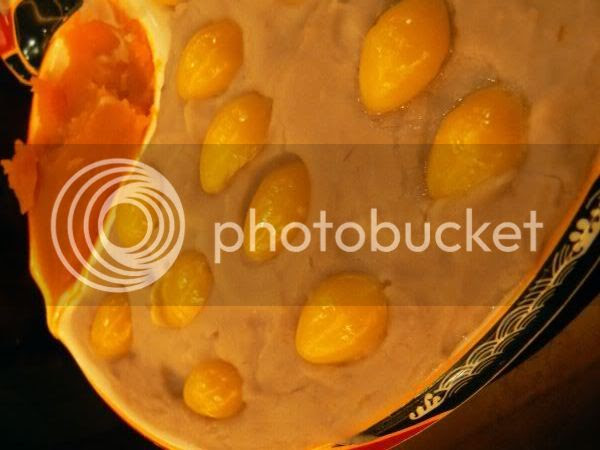 I'm a fan of this particular dessert - the Teochew Or Nee. Steamed mashed yam is mixed with lard to give it flavour and topped with blanched gingko nuts. This version comes with steamed mashed pumpkin on the side which was good stuff. I liked their version as it's not too sweet compared to the traditional version.
We all had a great time, so thanks again to Jeannie Lee and KampungboyCitygal for organising the dinner. Aside from these dishes, the restaurant also serves lunch and dinner sets, home style dishes like Taiwanese porridge with sweet potato cubes and etc.
New Formosa Restaurant
46, Jalan SS2/24
Petaling Jaya
Tel No: 03 - 7875 1894
(Non Halal. Open daily from noon to 2.30 pm, 6 pm to 10.30 pm)
Other reviews:

That was some pampering scrumptious Feast indeed ! WOW !
for this we have to give Jeannie
( she must be the First to be that gracious ) a

thanks for the tip on the suckling pig.

that was quite a mouthful eh..good job!..what a start to monday blues..

wow this is wat i call FEAST! your title is utmost suitable for it hehe

Wow...big big feast and all looks yummy. Luscious sista, we go together one day ok?

*sobs* the dinner that i missed! everything looks good!

boo i need ur help..need to find a place in the city to cater for 60 pax halal..preferably somethin similar to citron cafe @ jln kia peng..that kinda relaxed setting..you reckon you can suggest something to me?? urgent!..budget @ around 100ish per pax

joe:
Why not we cater this 60pax of yours. I am dead serious mate. call me.

I don't normally take intestines but theirs are simply superb!

incredible! would really love to drop by this place soon since i missed out this special event :(

OMG! So much food!! How many of you were there? My stomach would have burst!

team bsg - she's a great host alrite, big feast for all of us.

lemongrass - never mind, you now know what else to order when you go again.

babe - yup, so much food we all groaning.

xiu long bao - hee hee, the desserts were good. I love the smooth caramel custard too.

jason - they also have one you eat with porridge that is good too.

mamabok - congrats on the new site!

meiyen - yes, do drop by for a meal, very good stuff.

wmw - yes that is good, you ta pau that and eat it next day also taste really fragrant.

OMG! u posted my picture!!! I will be famous soon! Sei lo... how should i react if ppl can recognise me when i go shopping.. or should i just wear a cap to cover??

ohmigosh....what a feast! everything looks soooo good!!! i must must must go and try this place the next time i'm in KL. i have friends staying ard ss2 and we like this other restaurant called Wong Kei, we always end up there for food cos its good food at affordable prices...
now we've got a new place to try!!

Looks delish, I ate there the last time I was in KL. My family found the candied yam to be disappointing, but everything else was so-so.