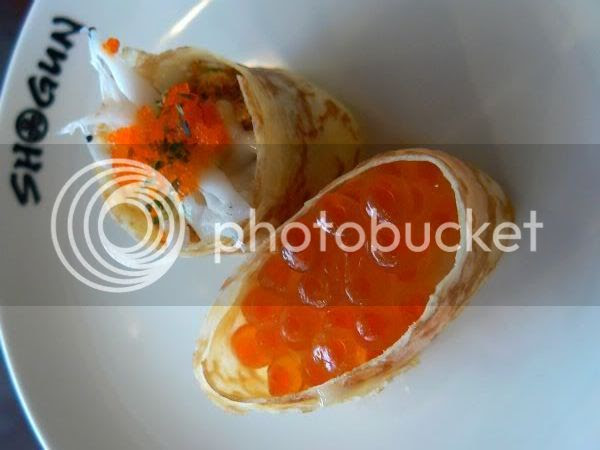 Originally I wanted to post this on Thursday but then I reckon since it's mid week, we kinda need a booster to make the week more interesting. I confess I'm currently suffering a severe addiction to Japanese food. Once I start eating it, I kinda crave it a lot so expect to see quite a few more places. The good thing about my Japanese craze is it kinda covers all kinds of items within the scope of Japanese cuisine. Not all are fantastic though as evidenced with this recent visit to Shogun but I guess you need to also cover the bad and good or else how would people know. Note that this is my personal view which may differ from your opinion. 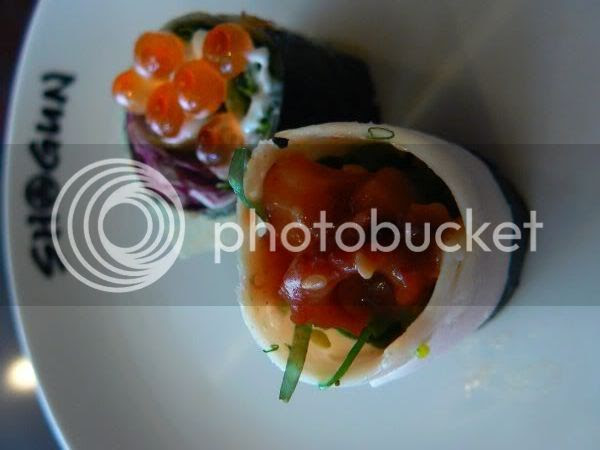 Last week, during a crazy moment in time when we were strolling around 1 Utama Shopping Centre looking for a place to eat, I decided we should go try this place. Although I usually avoid buffets, I decided to throw in the towel to sample this particular one. Maybe I was struck with extreme hunger (I didn't have any breakfast that day so my tummy was growling for sustenance) or it just sheer boredom with the mundane food and beverage selection at the mall. 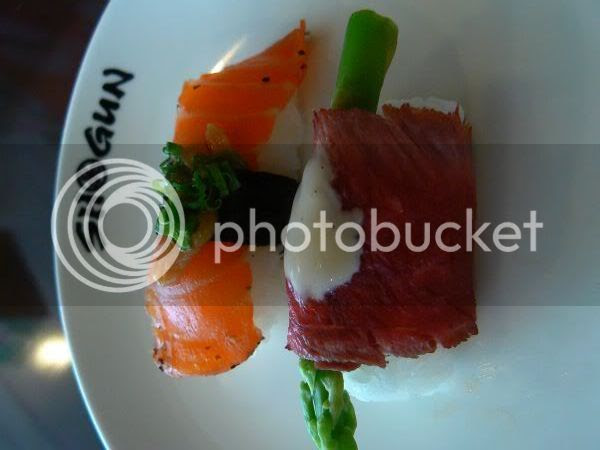 I was quite happy when I saw the sushi and sashimi counter filled with glass trays of rows and rows of various types of sushi. Since I love to play with my food, I was in seventh heaven as I had the time to arrange the sushi nicely, snap pictures and savour each piece slowly. Sadly, it wasn't meant to be as midway during one of my photo sessions, I was nicely told that I couldn't snap any pictures. Shucks, I guess that's when things went downhill. 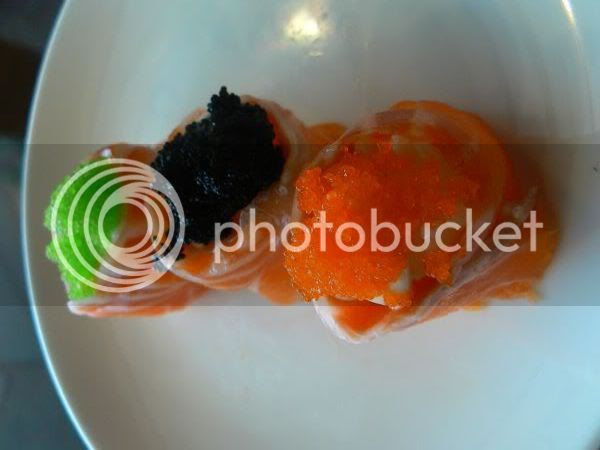 First, it started with the sashimi which was served in a big wooden boat. To get your sashimi cravings satisfied, you had to use these enormous chopsticks to pick them up to your plate. Bad idea especially since they were all cut unevenly and odd sized. Each piece looked like a remnant after they had sliced it nicely for their sushi. 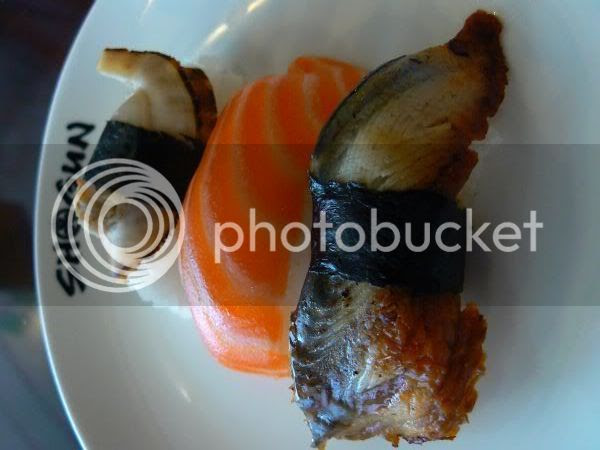 Moving away from the sashimi and sushi counter, we sampled the tempura selection. Maybe because they wanted to cater for the expected lunch crowd, each piece of tempura was pre-fried. Bad idea as cold tempura tastes awful and despite how much you dunk it in the soy sauce dip, it just doesn't taste great at all. Sadly most of the food was pre-cooked and kept in warmers which drastically affected the quality. For instance, they had steamed parrot fish kept in the warmer which developed a hard layer since it was overcooked with the heat lamps focusing on it. Even the unagi was slightly soggy after being left soaking in a pool of liquid. Most of the deep fried items like the mini crabs weren't crunchy anymore with the exception of the tiny prawns at the wasabi and soy sauce counter. Even the lamb ribs should be avoided as it was heavily coated with batter and full of fat. 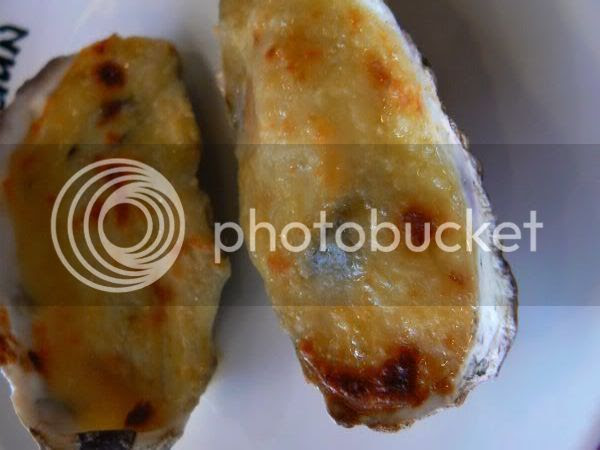 Each table had an order of cheese baked oysters which was not too bad. Not as plump as imported oysters but pretty decent for locally farmed oysters. You can also select other types of seafood like scallops, snails, prawns, mussels which is cheese baked from the counter. They also serve pretty good teriyaki salmon pieces among that selection. If you like teriyaki salmon head, they even have that on the warmer.
Although there were quite a bit of minuses in the buffet line, some pluses were also found like the plain boiled prawns they had in a bowl next to the chawan mushi. These tasted really fresh and sweet. I liked how it was kept warm in some kind of steamer. In fact if you love prawns, you will find various types here cooked in different styles. The teppanyaki counter is also a good choice if you like your food warm as they cook it from a selection of items you choose from. I had an all mushrooms one - enoki, shitake and oyster which was good. There is an array of ostrich meat, beef, lamb shoulder, bai ling mushrooms, fish and etc to select from. If you hate garlic, make sure you ask them to hold the garlic as they add loads of fried garlic in it. The sushi was not bad - I liked the one wrapped in salmon sashimi and topped with either green wasabi tobiko, ebiko and the black fish eggs (I doubt it's caviar! since it is so small). They're really innovative with the various types of sushi and makis. Saw some topped with pink dragonfruit, wrapped in egg wrappers and even turkey ham. There is also peking duck roll which looked interesting.
For sweets, you have a selection of fresh fruits, Malay kuih muih, cream cakes, mochi and Nestle ice-cream. I quite liked how they gave you aloe vera cubes in syrup to eat with your ice-cream which was nice and refreshing.
If you can eat a lot, drop by here one day. I suspect during the weekend with a larger crowd, food will be replenished and hopefully be cooked on the spot. The charges for the buffet are:
Buffet Lunch - RM43++ per person (Monday to Friday), RM52++ per person (Sat, Sun and Public Holiday)
Buffet Dinner - RM52++ per person (Monday to Sunday and Public Holiday)
Kids from the age of 4 to 11 years are charged RM28++ per person
Shogun Japanese Buffet Restaurant
Lot S 335A, 2nd Floor Oval
1-Utama Shopping Centre
Bandar Utama
Petaling Jaya
Tel No: 03 - 7726 5770
(Pork Free. Open for lunch from noon to 3.30pm while dinner is from 6.30 to 10pm)
*Disclaimer: The opinions expressed here is entirely based on my personal tastebuds and may vary for others. The reviewer also declares that she has not received any monetary or non-monetary compensation from the restaurant for writing this review.
Tagged with: Japanese Food + 1 Utama + Shogun Japanese Buffet
Other reviews:
Posted by boo_licious at 12:00 AM

big boys oven - u're up late! Hope it wasn't to do with baking. Savour those pixs since that was all I managed to snap. It has it's good pts and bad ones but makes a change from the boring places in 1U.

Your pics look great. Too bad about the no-photos rule. I wonder how they apply those rules, for example, if I'm dining there with my family and celebrating a birthday, would I be allowed to take pictures? Alternatively, is it because your camera is a little professional looking and daunting and they think you're a spy? Would a simple point-n-shoot like mine have survived the test? I really wonder... I do understand why some establishments don't allow photography, of course, but in my opinion, the pros far outweigh the cons.

Having said that, I've heard a lot about the buffet here - good stuff, generally (I guess it's good value for families with kids), but like you, I'm not one for buffets. It's the age thing, isn't it? hehe.

i simply hate their stupid ruling. however, they allow diners to take photos amongst themselves but not the food...duh! btw, the baked oysters were complimentary, at least it was the last time i was there a coupla mths ago.

hhmmm..... may b my previous experience was not a good one. The food (those on chafing dish) looks like those left-over food to me last time... their sushi was good... the sashimi was not bad.... its definitely worth the price..

hey boo! funny bout the no-photo rule. even jogoya in starhill has imposed this rule too i heard. ah.. too bad, their loss from floggers like u :>

lemongrass, you're not alone. i dun dig buffet too haha

i was here 2 weeks ago with my frens and like my fren have said... the food is ok but they didn't WOW me!

there are hits and misses. i took a slice of teriyaki cod, oh my... it's so tough and coarse like tenggiri but looked so glossy in the warmer! that's why i din bothered to take pics and post about my experience :p

I think the food here is not bad, but I think I still prefer their branch in Wisma UOA II (Saisake). And ever since I discovered Rakuzen's All You Can Eat, I've never looked back. LOL.

That's pretty frustrating when you gotto put down the camera. But they put all those sushi in warmer?

Boo, you didn't use my tactic!! Remember my step-by-step guide?

Hey, nice pix...
At least you got few good pics before the waiter told you that you can't snap pix!!! hahahahah

for me.... when i took out my camera the waiter walked by and stop me edi...

but thank God they gave me double servings of the oysters... hahahahaha

i love jap buffets but dont quite like shogun.. but i do admit.. the pictures do look extremely appertising!

boo: I was not baking that morning, and not this week. :) I just cannot sleep due to my 9 to 5 job. I was very worried about a group of saudi arab students at UniKL got bullied by the senior management and were so helpless.

lemongrass - I guess they don't want people to steal their ideas. Must admit if u go through Precious Pea's visit to the other Japanese buffet, I can spot similarities in design.

sweettooth - it probably was complimentary as a plate arrived just before I was told to stop snapping.

jackson - that's why best jap buffet is the stall type vs the cooked food warmer type.

jun - I heard abt the rule in Jogoya. Guess they didn't want too many pixs of their food floating around in the blogosphere.

babe - good or bad, must blog abt it or else how would people know. That's what the other reviews is for since I may have had one bad experience but someone else may have liked it.

bsg - bring your own in a flask?

Izad - I vaguely remember Saisaki. Think it was more expensive. Must go try Rakuzen's Eat all you can one day. Probably won't bankrupt them since we don't eat much.

jason - yeah it was since I had a lot of fun. we had loads of time to kill before our movie hence we were happy to hang out here. No sushi in the warmer, only the cooked food and pak chiok har.

kensan - still early so I think they were like blur blur.

slacker - it's a different type which kinda caters to the local tastes. Note how you never see a Japanese at these buffets no matter how expensive they are.

most of my friends said Shogun is bad, so I always try to avoid it. About the photo shooting... usually I "pretend" checking my lens, previewing old photos... and snap the food whenever no one looking at me ;-)

tekko - yeah, I was kinda mad that day as 1U's food is super boring nowadays. Good tip on the pix taking in secret, will keep that in mind.

I was there a couple of times, and found the food to be so-so. But my last visit there turned me off that place for the long run... as we were eating halfway when we saw not 1, but 2 little cockroaches coming up from the middle section of the table =(