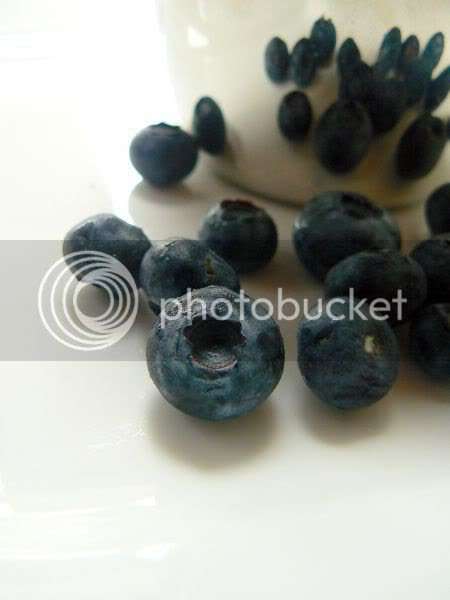 There seems to be a lot of cheap blueberries around town at the moment. First, TMC had a special promotion for RM7.25 which I thought was a very good price considering it goes for double all the time. Then Isetan topped the scales with sale price of RM6.99 last weekend. I've been stocking them up and slowly using them. First, I made the tart then muffins. I think the next recipe should be blueberry crumble as it tastes so much nicer when it's cooked down. Although prices have gone back up a bit, it's still pretty reasonable as Isetan is selling them for RM9.99. 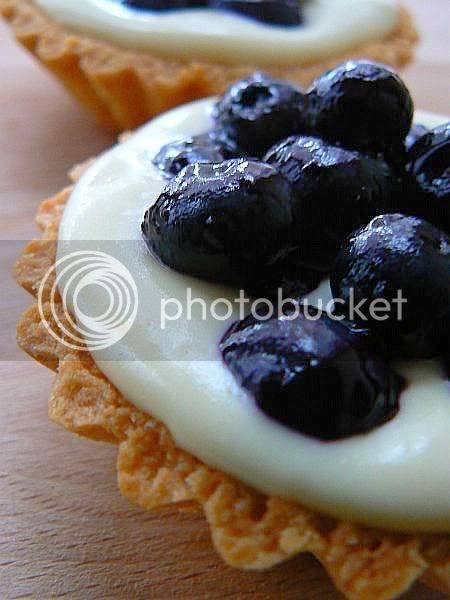 Since we don't often get blueberries at such reasonable prices, I started digging through my cookbooks for a good recipe. Decided to try Claudia Fleming's Blueberry Cream Cheese Tart which I have been eyeing for a long time. In fact, I actually bought that cookbook just for this recipe. From her cookbook, The Last Course, the tarts use a graham cracker crust. However since I was lazy, I made do with pre-made tart shells for photo taking and used the tart shells I had made for my Lemon Tart. They have been sitting in the freezer and all I needed to do was just pop them in the oven to bake them.
It's quite simple to make the pastry cream and the blueberry topping with the syrup. The pastry cream has hints of cream cheese which seems to develop better if you leave it overnight. It was really good stuff and Splashie Boy was one happy fella when he got home and found this in his fridge that night. For the adapted recipe from the cookbook, refer below. 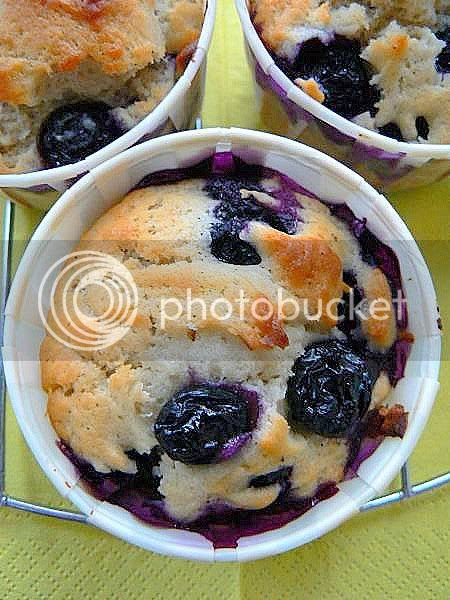 For another batch, I made Blueberry Muffins for snacks. It's a simple recipe which a friend of mine swears by from the Australian Women's Weekly (AWW). Since it's her recipe, I won't put it up but I'll link it to another recipe from AWW which is kinda similar. The texture of the muffins is excellent with a soft and fine crumb. My only complaint was the taste was quite bland with just the blueberries. I should have added some grated orange rind or orange juice to give it more flavour.
Blueberry Cream Cheese Tarts with Graham Cracker Crust
(adapted from Claudia Fleming's The Last Course)
Cream Cheese Pastry Cream
1 cup milk
5 tablespoons sugar
4 large egg yolks
2 1/2 tablespoons cornstarch
6 ozs of cream cheese, cut into cubes and at room temperature
1 teaspoon vanilla extract
1/2 cup heavy cream, whipped to soft peaks
Combine 3/4 cup of the milk and 3 tablespoons in a heavy bottomed saucepan and simmer over medium heat. In another bowl, whisk the egg yolks, the remaining 2 tablespoons of sugar and cornstarch. Whisk remaining 1/4 cup milk into the egg mixture. Remove the hot milk and whisk a bit slowly into the mixture to just warm the egg mixture. Pour the egg yolk mixture into the hot milk in the saucepan, whisking constantly when you pour.
Place the saucepan on a stove and bring it to the boil while whisking constantly. You will see lots of bubbles when you whisk it but when it starts to thicken, the bubbles will dissapear. It takes about 3 minutes for it to thicken. Add the cream cheese cubes and vanilla extract and whisk it into the custard. Whisk untill all the lumps dissapear. To make sure everything is melted, sieve the mixture. Cover the surface of the pastry cream with cling wrap and refrigerate. Leave it to chill and fold in the whipped heavy cream.
Blueberry Topping

2 1/2 cups blueberries
1 tablespoon sugar
To make the syrup, mix 1 cup of blueberries and sugar in a saucepan over heat. Cook until the berries have popped and broken down, above 5 minutes. Sieve the mixture to get the syrup while discarding the solids. Toss the remaining blueberries with the syrup and add it as a topping to the pastry cream in the tart shell.
Tagged with: Blueberry + Blueberry Cream Cheese Tart + Blueberry Muffin
Posted by boo_licious at 12:20 AM

Email ThisBlogThis!Share to TwitterShare to FacebookShare to Pinterest
Labels: 6 o

I love blueberries. It's season here too in USA - US$3.00 a pound.
Not bad huh? I like to eat it fresh and of course blueberries cheesecake is my favourite too.

Yes it is blueberry season. I'm getting them as cheap as 99c a punnet in New York =P

ooo yum yum blueberries
I love the pictures of the muffins because they look like they have a nice crunchy outside! the blueberries look really juicy :)

Oh, they look gorgeous. Looks very very yummy!!! I never buy fresh blueberries and usually I buy the blueberry sauce if I'm making muffins so that there are more flavour and taste to the muffins.

cat cat - I guess we just get a small portion of the US ones here but it's definitely worth it to try them now as it's usually so expensive here. I also love blueberry cheesecake.

cheesywee - there's a nice crust on top and soft inside so it's yum!

cutie - yup because the sauce has added sugar already. Wanted to experiment with the fruits hence I decided to make it with fresh ones.

now i am truly in the mood for bluberries.

Those blueberries of yours look so beautiful..... look so bluish. I will definetlyn head to by some blueberries... hope I am not too late.

jasmine - once in a while season so one should just get some.

big boys oven and babekl - they're selling abt RM9 plus so that's still quite cheap if you want to get some.

arghh i missed the blueberries cheap-time-bandwagon. will look out for it again

rokh - should be around still since it's summertime. Try looking for it.