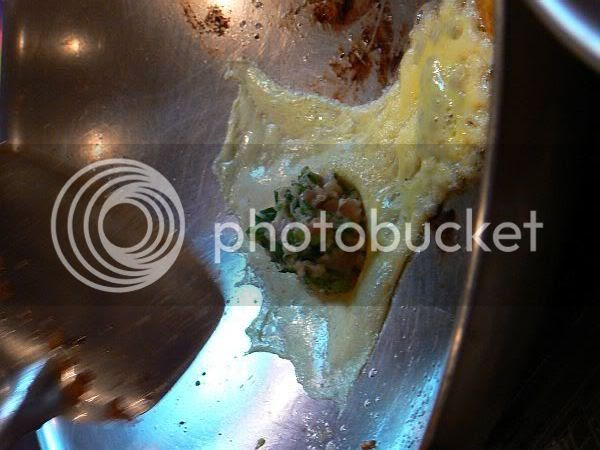 Last Sunday, my friend S and I visited Thean Hou Temple for this food carnival. We vowed to get there early since we knew it would be packed with people. Despite us arriving around 10 am which is when the carnival starts, it was already chaotic in the temple hall. 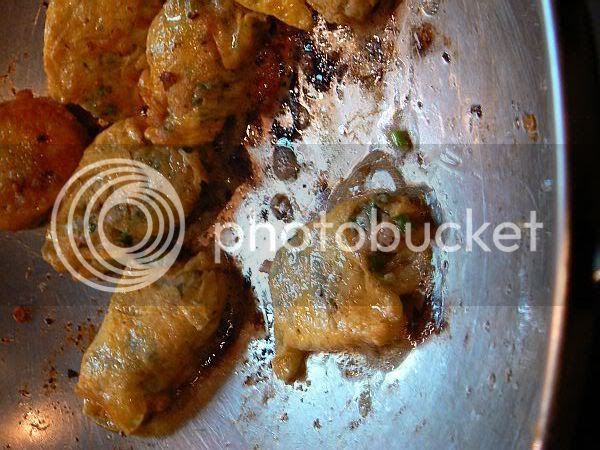 The pancake is pan fried till golden brown and served. 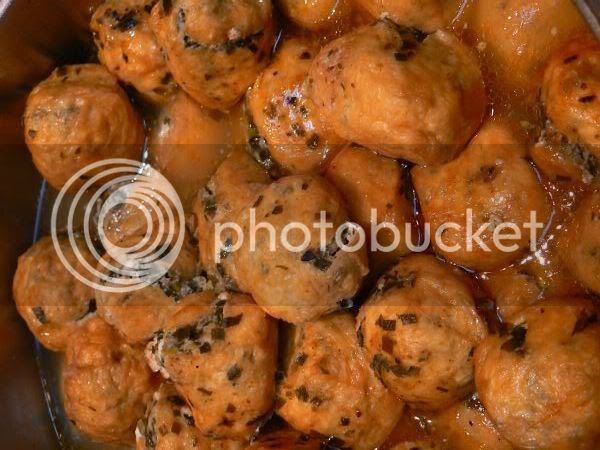 The good food really got snapped up quickly and some of the ladies from the various clans had travelled from Ipoh to join the carnival. My favourite stall was from the Guangxi clan right next to the main entrance. There was a lady making pancakes with egg and a mixture of minced meat, fish paste and chopped chives which was delicious. Chopped chives is featured a lot in Guangxi's cuisine as they also use it to stuff tofu puffs and tiny bittergourds. The mix is similar to the pancake except they add chopped peanuts in it. 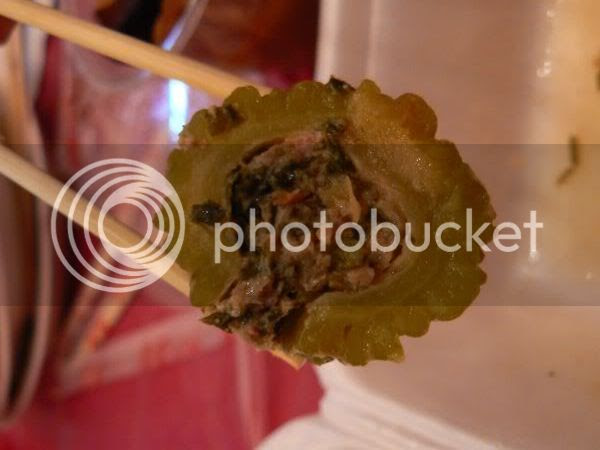 Not only do they use the chopped chives to stuff in tofu and vegetables, it is also used as a flavouring with ginger and garlic for poached chicken. Once fried with these items, the chicken is fragrant and delicious. 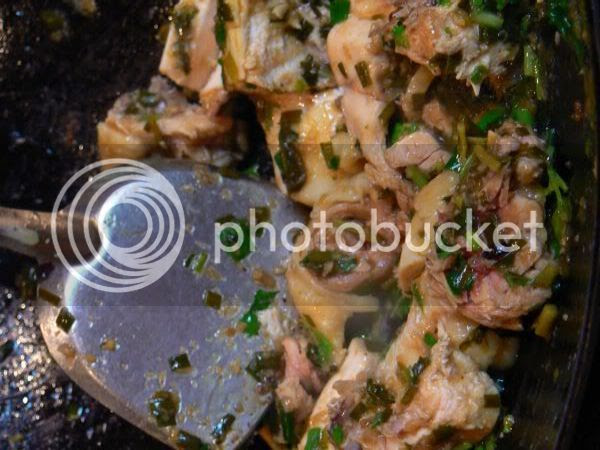 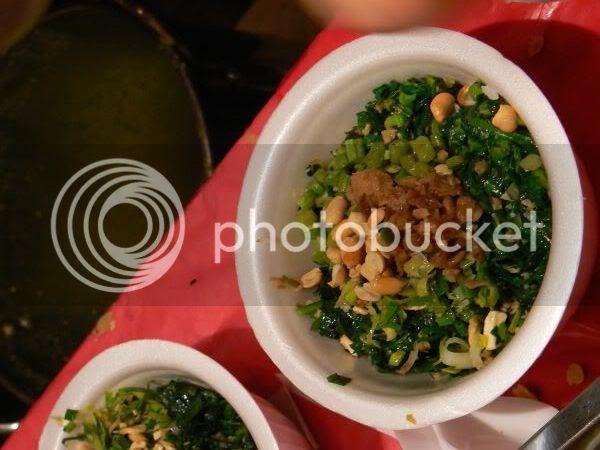 Hakka Lui Cha with all the vegetables on top of rice 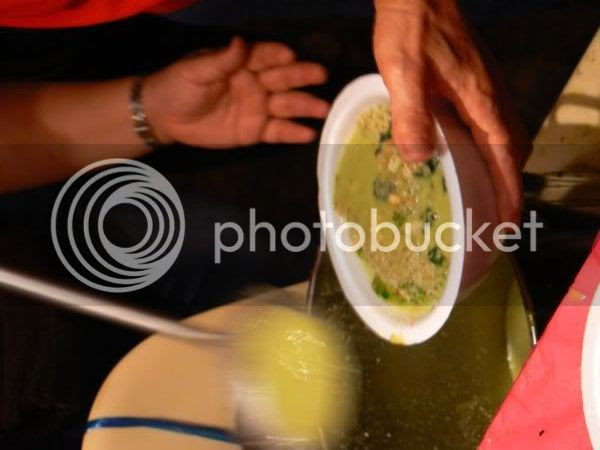 Ladling the tea mixture on top of the vegetables and rice. Peanuts are sprinkled on top.

The Hakka clan were doing brisk business with a selection of mua chee, yong tau foo and a Lui Cha stall. A bowl of rice will be filled up with the various vegetables before the tea mixture is poured on top. Really delicious and again, it felt like something your Hakka grandmother would have made at home for you. 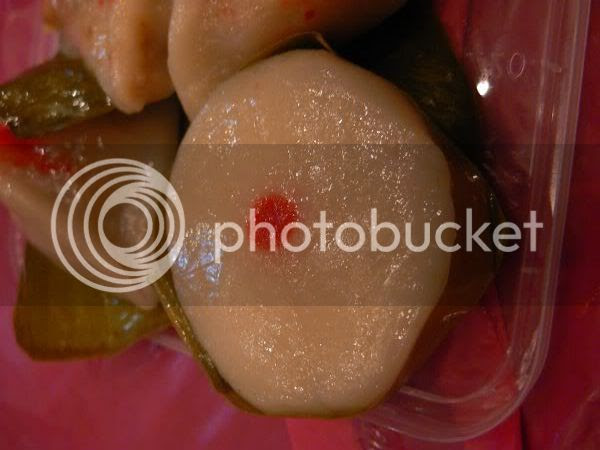 The Hainanese were selling the famous Chicken Rice, Curry, Mutton Stew and these sweet coconut dumplings called Yi Buak. They're filled with shredded coconut, peanuts and sesame seed filling. We also tried the Mutton Stew which was good - more herbal tasting and not much oil. The mutton pieces were tender and great with the crunchy wood ear fungus. 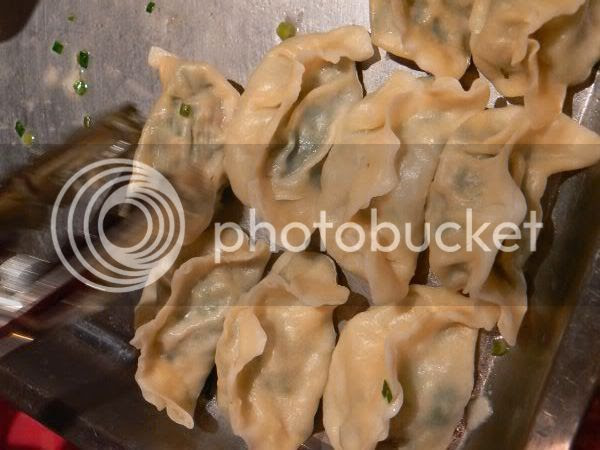 There was also a stall selling Shanghainese food like these dumplings. Served with shredded ginger and black vinegar, this was really good stuff. I liked the filling. They also sold Shanghai Pau which we didn't try and the Lion Head Meatballs. 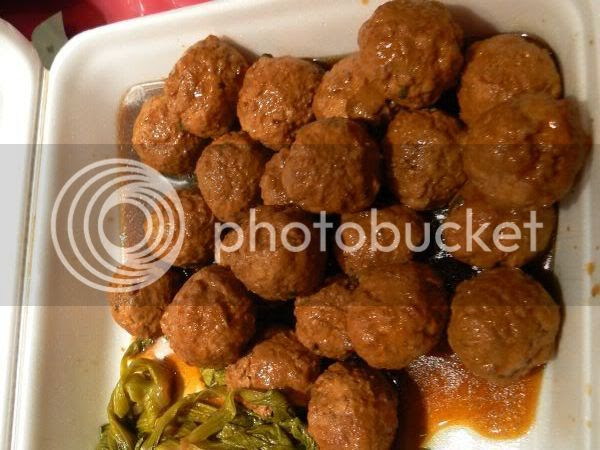 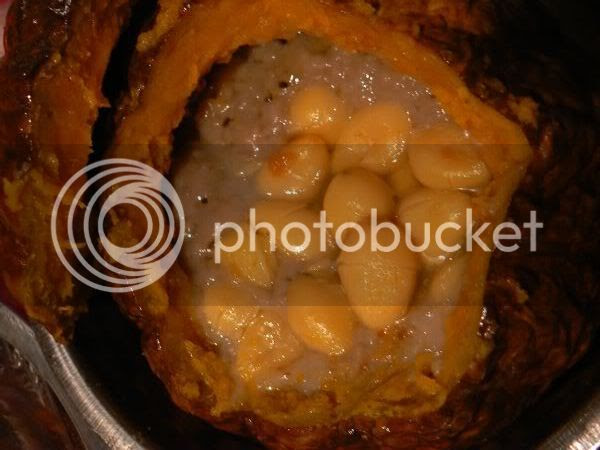 Teochew Or Nee in a Pumpkin

The Teochews had a huge stall and they were selling Or Nee (Yam Pudding) topped with gingko nuts in a steamed pumpkin shell. It looked really tempting but was quite pricey hence we didn't get to try it. They also have cai kuih (filled with shredded yam bean) and peach shaped dumplings (toh kuih) that is filled with green bean paste. 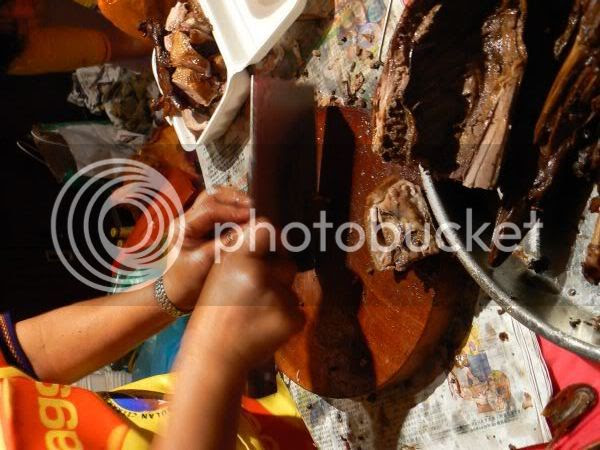 There were quite a few other clans I did not feature since they were serving dishes we commonly see. Some were so difficult to get near as crowds of people will be pushing their way to queue and buy the food. Also saw Ipoh Salt Baked Chicken, rojak and etc at the other stalls. 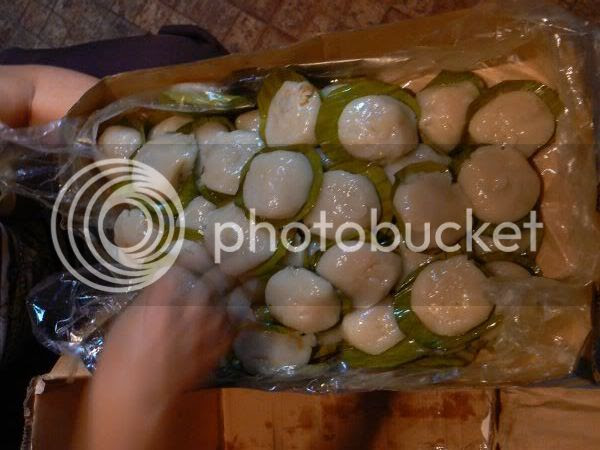 Although you may not have caught this year's food carnival, I have been told this a yearly affair. If you do read the announcement, remember to visit it as it's a good opportunity to sample home cooked Chinese food and try the various clans special dishes.

hi boo, i think i hav prob publishing my post. Hmm..still figuring out how to fix it. The msg shows that my post has been published successfully but the new post is just not there.

mycoffee - they announced it in the Star and the chinese papers. Sponsored by Maggi.

xiu long bao - there's a time lag nowadays. Just wait a while and it will upload itself. It happened to me before.

the guangxi food looked very good. i'm begging my fren to invite me for her wedding lunch in her hometown :p i heard they're serving guangxi grubs like yong tau foo etc etc. hmm otherwise maybe i can ask her to bring us to bentong for a crawl :D

Chinese food galore! My mom used to make the tofu pok at home but minus the peanuts. I'm a Canto though.

babe - we bought the most items from the guangxi clan as they were so good. Eaten guangxi chicken before in restaurants here which was also good.

jason - yes, and so packed with people! There were also old ladies from Ipoh with pomelo, sat key mah, peanuts and etc.

10am. Thot when u said u have an early morning it'll be 8am or even 7am. =)
Wish I can pop some of those stuffed tofu & pancake into my mouth. Look scrumptious.

omg. can't believe i miss out on this! will definitely look out for the next one.

i read about this some time back, most unfortunately, i was not in during the carnival :(. guess i missed out on loads of good food!

wow, i am surprised they allowed meat in the temple. i thought sure vegetarian one. it looks superb though, the entire spread.

hi there! any suggestions for a good place to eat chinese? for my anniversary! would really appreciate any suggerstions! thanks so much!

did u have this just the day after the food crawl?? respect! i was quite sick of food the day after d.. looks dmn good..i can imagine tons of photographs if we go food crawling here..

Boo, next year can inform me also? I wanna go.

yeah like ffb, am pretty shocked how come meats are allowed in da temple! anyways, would love to join this event next year.. food looks yummy!

hahaha...imagining the group of us floggers there, running around taking photos!

whoa whoa! so many stuff

wahhh Boo, you really know how to cari makan ah :-) sounds really tempting. I will surely look out for it next year.

this blog is cool!

tummythoz - needed to run some errands still so had to wake up earlier.

jasmine - better mark it in yr calendar then.

sc - am sure you got lots of good food elsewhere.

fbb - dunno. maybe because this is the hall before the temple? Saw some couples who were getting registered looking so unhappy with the amt of people at the temple. We probably ruined their pix taking.

hansular - bit hard to say. Email me at boo_liciouskl@yahoo.com and maybe u can state what type of budget and type of chinese food?

joe - we ate only a bit as we got so full after a while esp with the lui cha.

precious pea - no problems, we can do gathering there.

meiyen - I think it's considered outside of the temple since it's at the hall in front of it.

wmw - u will have to fight with the other photographers. Saw quite a few there with big and small cameras as the tourists were also around visiting the temple.

lianne - nah, read abt it in the papers.

OMG...The Teochew in me is screaming out for On Nee and Duck!!!

LOL, u can come home and eat lots of Or Nee and Teochew Duck. Just call us Floggers for help.

saw this event in newspaper weeks ago, thought no flogger will be there coz it's mostly home cooked Chinese food, so didn't get the ticket as i afraid i will be the only one taking photo in the crowd of aunties ;-)

tekko - lots of aunts and uncles, kiddies and etc. But food was good so kinda worth it.