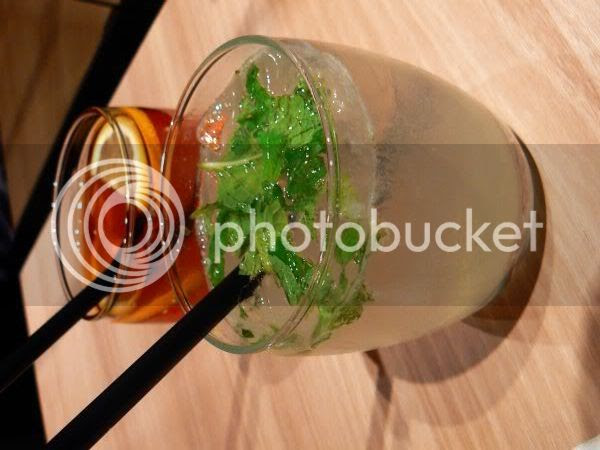 Whenever Splashie Boy says lunch at Suria KLCC, my face always go "URGH!" as I'm so sick of the choices around there - either I have eaten at all the places or he does not think highly of those places I have yet to try. I recently found out that Bakerzin has opened an outlet here - at the third floor within Isetan. Formerly the Sun Moulin cafe, it's tucked in a corner and located between the Bacchus wine shop and the Miki cheesecake place. A fresh new look has been given with lime green comfy chairs, blonde wood tables, high tables with chairs lined in the same lime green plus those funky transparent chairs which I want for my home. 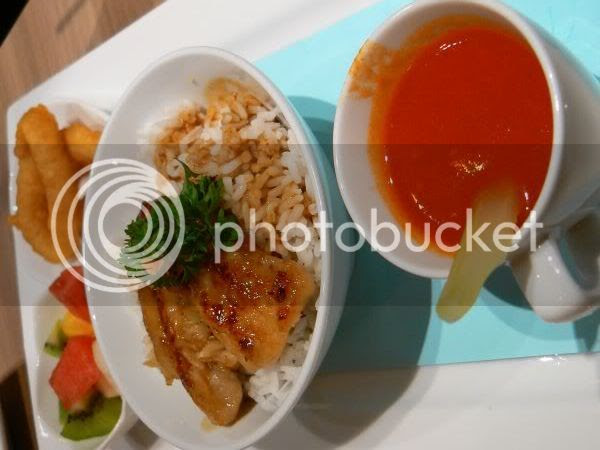 I must admit I've not dined within Bakerzin before since I usually pack back the cakes hence I was pleasantly surprised with the food quality which was good. We decided to try their lunch sampler for RM20++ since it offered more choices. You're given a piece of paper to tick what you want for lunch and drinks. I had the lime and mint while Splashie Boy had an ice lemon tea. Lime juice was slightly sour which is one how I like it versus dripping with lots of syrup. 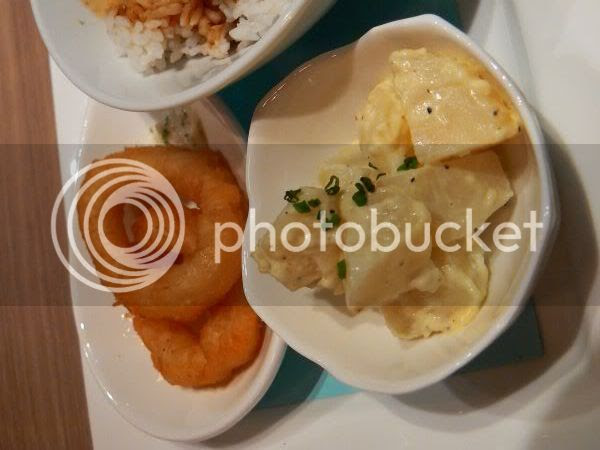 The fun part was choosing the meal - I ordered the tomato soup which came in a teeny weeny cup and a stick of celery. It kinda looks like their Bloody Mary soup in the menu except it wasn't spicy - tasted good and slightly sweet. 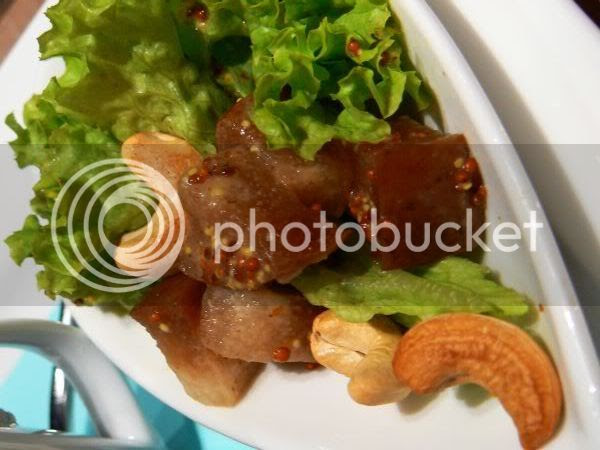 Instead of a soup for a starter, Splashie Boy chose to have the pear salad which was very good stuff. Chopped pears were tossed in a dressing which had whole grain mustard and cashewnuts. Aside from the starters, you can also choose two side dishes - we both had the calamari rings which was also good stuff. The calamari was cooked just right and not chewy. It's not on their regular menu and only available in the lunch sampler. For my side dish, I had the fruit salad - miniscule chopped kiwi, pineapple and watermelon while Splashie Boy had a potato salad. We both chose the fish dishes - while mine was teriyaki fish with rice, he had the fish with mash potatoes. His fish was so much nicer than mine purely due to the sauce they added. Can't remember what it was but it such good stuff, he relished every spoonful of it. For desserts, the choices look similar to their desert tapas selection. He had the creme brulee, a a favourite of his with that must have caramelised sugar crust. Filled with vanilla seeds, the custard underneath was good stuff. 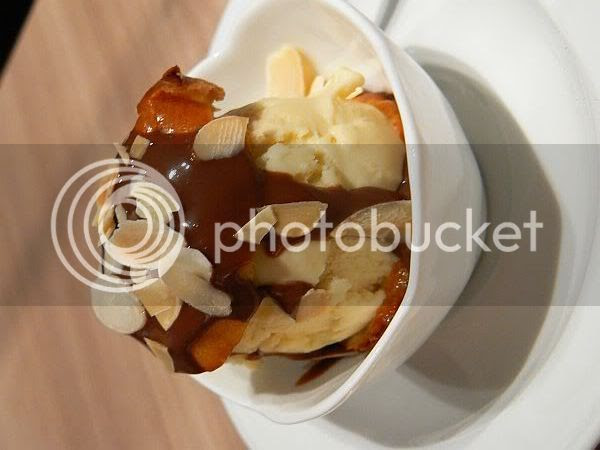 I had to have the profiterole, something I love a lot. Filled with ice cream, I thought it wasn't too fantastic as the puff was slightly chewy. Maybe I wasn't eating it right but I made a big mess of trying to cut it with a small spoon.

Overall, I thought the lunch sampler was a good choice as it offered me a variety but if you're a hearty eater, portions may be too small for you. We will probably return to try their pastas which look interesting. Also spied savoury crepes which is also a favourite of mine.

(Halal. Open during the operating hours of Isetan department store.)

love the idea of this lunch sampler. wonder if the other bakerzins offer it? KLCC is a bit out of the way for me...

Looks like it is really value for money... lots of variety to taste n within the budget.

Love their cakes, even we are good bakers ourself. Always feel that bakerzin is one of the trend setter in KL...great life style.

Oh, I didn't know they had a lunch sampler at Bakerzin. Was beginning to lose faith in Bakerzin. Maybe should try this menu to revive da faith. haha.

OK...you have convinced me to go there to try their meals.

aiyoh..the fish with the rice..looks very urgh wor..but i did hear the lunch was ok lar..

had desserts once..found it quite expensive..

ohhh so dats where the ghost chairs have gone to. BV's outlet no more such chairs haha...

din know they have lunch samplers, maybe should try one day

I don't recall seeing any lunch set on their menu last time. Should gave the m a try if I happens to be in KLCC. :)

interesting. how many types of food can i tick? the portion is too small, but can compensate wiv more desserts from the display case ;p

i first tried the Bakerzin in singapore and desserts and food is great there. the outlet in bangsar was bad and i never went back there.

I only ate at Bakerzin once in Queensbay Mall, Penang. Didn't really like the food. Will just stick to their desserts in the future. But somehow your photos made the food look absolutely 'delicious' here! :)

I believe 1Utama do have these set lunches too.
boo_licious, hows the food comparing to Delicious?

wmw - neither have I until that day. Pretty good stuff.

jasmine - I saw a banner in the 1U outlet for this so u can try there. Not sure if quality is consistent though.

big boys oven - yeah they are the french ones who set the trend for it.

lemongrass - oh no! That bad? I've not tasted the food before but this outlet's food was pretty good.

precious pea - LOL, but u sure the sampler enough?

joe - bit pricey but I do like their desserts esp the Black Forest Cake.

babe - oh I didn't know they took that away as I rarely walk in the dining area of the one in BVillage.

ipohwav - it's a new thing so u may not have seen it the day they took u on yr foodcrawl.

titahpah - yeah, I heard the one in Spore is much better. Sigh, guess they have better quality control there.

valen - aww, that's bad. I must admit the food was good here so maybe it depend on which outlet you dine at.

mikelee - can't really compare as I've not eaten their actual menu but I believe they're different from Delicious. Price wise, maybe more people will eat Delicious as the portions are quite generous there but not sure how long that will last with their expansion drive.

thanks thanks! didn't know that although I was at Isetan to restock snacks last Thursday!

tekko - yeah, it's so well hidden I doubt people know abt it.