To usher in the New Year, I attended a wonderful Retro Party at Mau's place where there was lots of good food, drink and of course, those retro tunes that made us all go aaahhh! Not sure if anyone of you have guessed but to us, retro is the eighties with the likes of music from Wham, Culture Club, Bananarama and etc. I have always loved the British pop music scene probably because of my older siblings' influence since they used to bring back their singles whenever they came back for summer holidays. In school, it was also hip to tune in to the BBC Worldwide's Top Twenty (I still listen to it once in a while on BBC1's Internet Radio) and watch Top of the Pops on video.
On to the food bit - Mau decided to have a potluck party that was themed "Chap Fan" or Economy Rice style where you have lots and lots of varieties which is the food you get at home that is best eaten with rice. The economy rice stalls are extremely popular among the lunch crowd as they offer good value for money at prices from RM3 to RM4 depending on what you take. I love them as I can get to choose more vegetables with my meal. 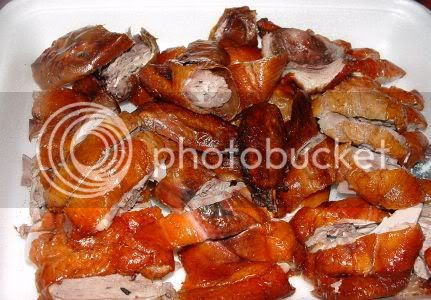 Sorry about the quality of some pictures - I started taking some without flash as I thought it was sufficient light. As things were kept simple, people were given two options: pack a food item from your favourite stall or cook something at home. S decided she will bring some the famous Loong Foong roast duck for us. Very yummy stuff and it's something I often pack some home for myself to eat whenever I am feeling lazy to cook a meal. 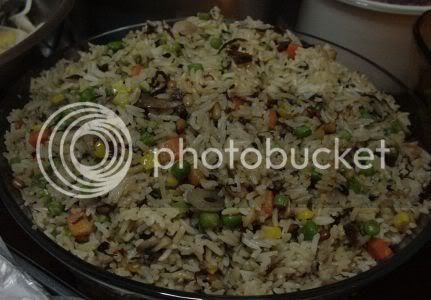 Mau made this wonderful vegetarian fried rice which went so well with the other dishes. I kept eating loads of this fried rice as it was so yummy. 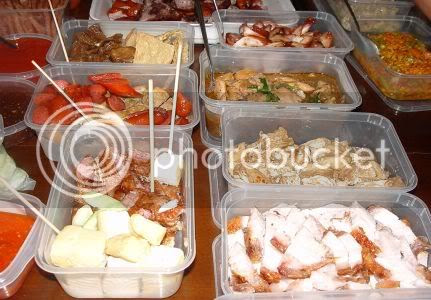 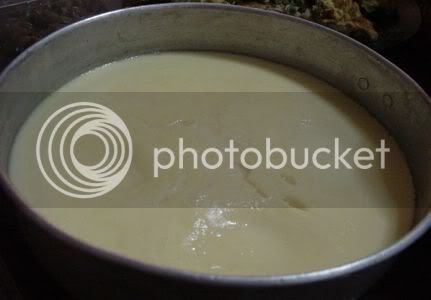 SG made her first steamed egg and it was perfect - so soft and smooth. It was her second attempt making it as the alarm did not go off for her first attempt. Lots of slow fire and patience went into making this. 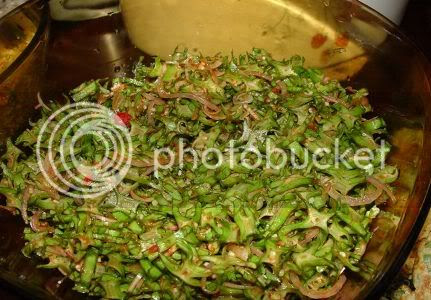 This is the four angled beans or kacang botol in Malay that was tossed in a chilli sauce that was a hit as the whole bowl of beans were finished at the end of the party. 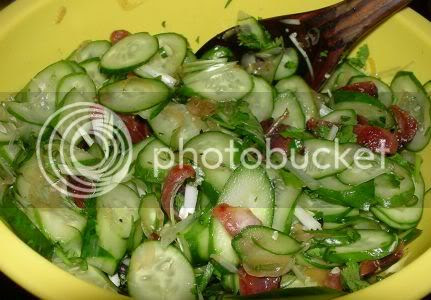 Robyn made this salad of cucumbers, thai sausages and coriander which was very nice and refreshing. The thai sausage reminds me a bit of the Chinese lap cheong (waxed sausage). 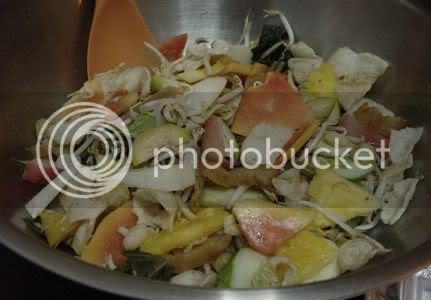 KG bought this yummy rojak from his all time favourite shop, Bayu Timor. The picture does not feature the gooey rojak sauce that went with it. Now I know why I often spy ladies eating this rojak during lunchtime as it is very good stuff. 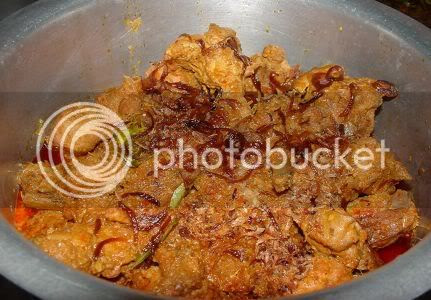 KG also brought items from his auntie's kitchen made from his grandmother's recipes. This was the Kari Kapitan - a curry chicken with lots of shredded kaffir lime and lemongrass that made it so fragrant and yummy. Fantastic stuff! I have been offered a lifetime supply of this since they now have a servant to help cook it - will definitely take up their offer. 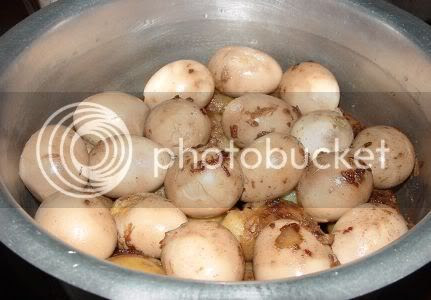 This is part of the dish below, hard boiled eggs and potatoes that were cooked in soya sauce. 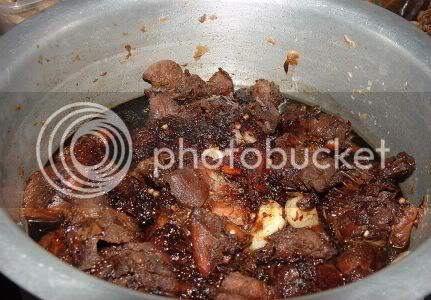 Instead of Tau Yew Bak, this is the chicken version and is called Tau Yew Kay that is cooked with dark soya sauce. 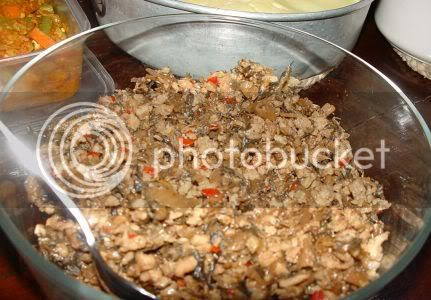 What did I make? Two home cook dishes which I cooked ahead since I wanted to enjoy my weekend. One was the mui choy minced chicken which I added a bit of chillies and chilli padi. 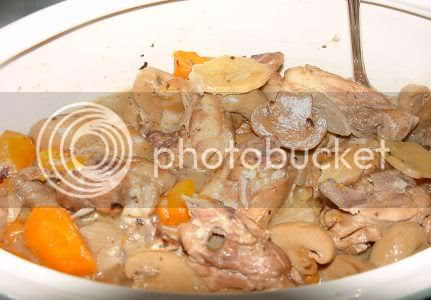 Another dish I made was chicken with canned mushrooms and carrots, a very simple dish that my mother used to make for us at home. It's flavoured with a bit of oyster sauce and soya sauce. Dessert was a yummy flourless chocolate mud cake that S made.
The party was great fun and we even had vodka cocktails to drink - lychee vodka or peach vodka anyone? They taste great but pack a punch. We even watched an 80s' classic television series, Macgyver on projector - brings back lots of memories as that was the show everyone talked about in school. Who would have thought you can use chocolate to stop an acid leak? See, now I know why chocolate is my favourite, not only can I eat it, I can even save nuclear labs from an explosion with a Hershey bar!
Thank you Mau for the great party - we both had a wonderful time with the food, music and Macgyver.
Posted by boo_licious at 5:02 AM

oh boo, what a spread of yummy food! i'm soooo envious... and those veggies, oh my! we have the same winged beans in the philippines (we call it sigarilyas or sigidilyas), but i've never had it with chili sauce.

That is an awesome visual treat...:)

(Mmmmmmm.... everything looks so yummy tho!)

so much food... slurp! (wiping saliva from keyboard...)

A retro party sounds very cool! and with Macgyver playing on a projector? I love it. The food looks great by the way!

stefoodie - amazing how things are so similar. It's very yummy fried with some sambal and chillies.

sailu - thank you. It was a real feast!

J - we had so much leftovers. I think everyone overestimated portions but it was a lot of variety.

piggy - I am hungry now looking back at the pictures too. Feel like having some of that rojak.

michele - I found another Macgyver fan! He is pretty fantastic still. Retro parties are so cool - relive memories.