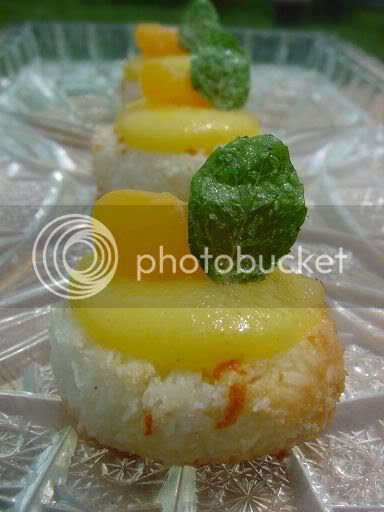 It's Donna Hay time again and Glutton Rabbit from Pearl of the Orient is hosting this month's event which features macaroons. These macaroons are so simple to whip up and versatile as you can change them to suit your mood or event.
I experimented with the macaroons, making half portions to test different varieties. My first attempt was to incorporate local flavours - gula melaka (palm sugar in Malay) and pandan. I grated the gula melaka and mixed it with the dessicated coconut plus a dash of pandan juice extracted from pandan leaves. The gula melaka made my coconut mixture brown hence my macaroons looked toasted. I felt the flavours were lacking in that combination hence I set out to make my second batch.
This time round, I was inspired by Coconut Saras from Alice Medrich's Bittersweet whereby coconut macaroons get filled with a chocolate ganache and topped with a chocolate coating. Sounded good but I did not have any heavy cream in the fridge to made the ganache. Hence I made my own version by just pouring melted chocolate leftover from my chocolate eclairs into indents I have made in my macaroons. I popped them in the fridge and we ate them the next day. They tasted really good especially after I left it thaw slightly for five minutes as the chocolate center bit added a nice kick to the chewy coconut.
I was still not satisfied hence I flicked through my Donna Hay magazines and then inspiration struck, how about a mandarin orange version specially for the upcoming Chinese New Year? The more I thought of it, I got excited as I ran through the ideas - mandarin orange peel in my macaroons sounds a bit ordinary, whipped cream does not sound special but mandarin orange curd as a topping will definitely jazz it all up, should I sandwich it just like how they make french macaroons and etc.
I finally settled on what I wanted to do, something simple to follow Donna Hay's philosophy and recipes hence I made mandarin orange curd from her lemon curd recipe and topped it with a mandarin orange segment and a mint leaf painted with egg white and sprinkled with sugar. The whole thing looked fantastic after I assembled it and it was super easy to whip it all up. I got the thumbs up from Splashie Boy who demolished all the macaroons I made (only about six to seven of them since I made a half batch). Personally, I felt the curd could have been more tangy as the mandarin oranges were sweet so adjust them according to whether you prefer your curd sweet or tangy.
Here's how you can recreate this at home for Chinese New Year if you want a spectacular looking dessert:
Sugared Mint Leaf (inspired from this month's Flavours)
Mint leaves
Egg white
Fine caster sugar

Pick the mint leaves that do not have any marks or black spots. Wipe them with a wet cloth gently to avoid them breaking. Using a small brush, paint it with egg white. Sprinkle the fine sugar on top of it or you can dip the brush and paint it on. If you opt for the second option, be warned to do the sugar bit after you have painted all your leaves first with egg white as the sugar will stick to your brush. Leave it to air dry for 45 minutes.
Mandarin Orange Macaroons (Adapted from the original recipe)
2 cups dessicated coconut
1/2 cup sugar * I reduced this to about 1/4 cup as I did not want it too sweet
2 egg whites (Use large eggs)
1 ½ tablespoon shredded mandarin orange zest
Preheat the oven to 180ºC. Place the coconut, sugar, egg whites and zest in a bowl and mix to combine. Wet your hands and roll the mixture into balls. Place on a lined and greased baking tray, flatten slightly and cook for 15 minutes or until light golden. Leave the macaroons to cool in the baking tray when you remove it from the oven. If you remove it immediately, the macaroons will stick to the paper.
Mandarin Orange Curd (from Donna Hay)

Place butter, sugar and mandarin orange juice in a saucepan over low heat and stir until the butter is melted and the sugar is dissolved.
Remove from the heat and whisk in the eggs. Stir over low heat continously for 8-10 minutes or until thickened. Make sure eggs are at room temperature to prevent curdling. If the curd does curdle, press through the sieve and return to saucepan. Stir continously to prevent it from catching on the bottom until thickened. You can store the leftover curd in the fridge.

Tagged with: Donna Hay + Macaroons
Posted by boo_licious at 4:15 AM

I like your site and I will link to you from my site. http://crimsoneast.blogspot.com

zero - thanks for visiting and link away.

I have tagged you for the "5 cooking challenges for 2006" meme. Check out my blog for details....

boo, that is one seriously good looking macaroons! i did the pandan leaves with gula melaka idea, great mind think alike huh. but somehow yours look so much better! i love it

cath - it happens once in a blue moon. Now I wonder what to make for SHF and IMBB!

rosa - thanks, will check it out.

rokh - I actually had a nice pix of my gula melaka ones, I shaped them in pyramids but the taste was just not right for me though.

swee - thanks, I love your macaroons in the cup idea. Definitely easier to dump them in rather than get your hands dirty.

bron - thank you, they were yummy esp with the taste of mint at the end.

Sooooooooo pretty. Real treat to my eyes. I have to give this macaroon recipe a try, and I already know what kind of twist I'm going to give. Thanks for sharing. (Esp. I love this idea of sugared mint leaves!)

wow... the macaroons look delicious... besides making our own, can macaroons be found in shops or something like that? I don't think i could manage by making my own macaroons!

Hi Boo,
Uwaaa, these macaroons look so elegant and unique. The mandarin orange curd and sugared mint leaves definitely did magic to the macaroons. Great job! Stay tuned for the round up next week : )

obachan - the original recipe for the mint leaf was for a kaede leaf. I'm sure they will be easier to get in Japan. Looking forward to your version. By the way, the macaroons are very simple to make.

real adzuki - you don't really get these type of macaroons in shops but you get the french ones in places like bakerzin and hotel's bakery/cafes. They are very easy to make, just make sure your hands are wet as that helps you shape them.

Rabbit - thanks and I can't wait for the round-up.

in your instructions, you said roll into a ball. then? how come the finished products are like "pucks", rather than balls? oh, hangon, u did say flatten slightly. but still, how come the sides are vertical, and not like a squashed ball? u know what i mean? i mean, do you shape them laidat or do they become like that in the baking process? gonna try tomoro.

fatboybakes - I roll them into balls, flatten them and reshape them into pucks. The coconut mixture will crack a bit when you flatten it out so you will end up having to repair it a bit. Scraping tangerine peel is difficult as the skin is thin so be careful with your fingers.

Just remember to wet your hands as it's easier that way. I made a mistake of not wetting my hands the first round and my mixture crumbled on me. Adjust the time in the oven according to how golden you want your macaroons, I like mine slightly crisp hence I used 15 mins. Hope you enjoy it. Remember the curd can be sweet so if u like tangy, make a lemon one, just replace with the same amount of lemon juice.

Thanks for participating Boo licious. These sound yummy and I love the photo.